Written by NCRI Committee on the Judiciary
12th July 2022 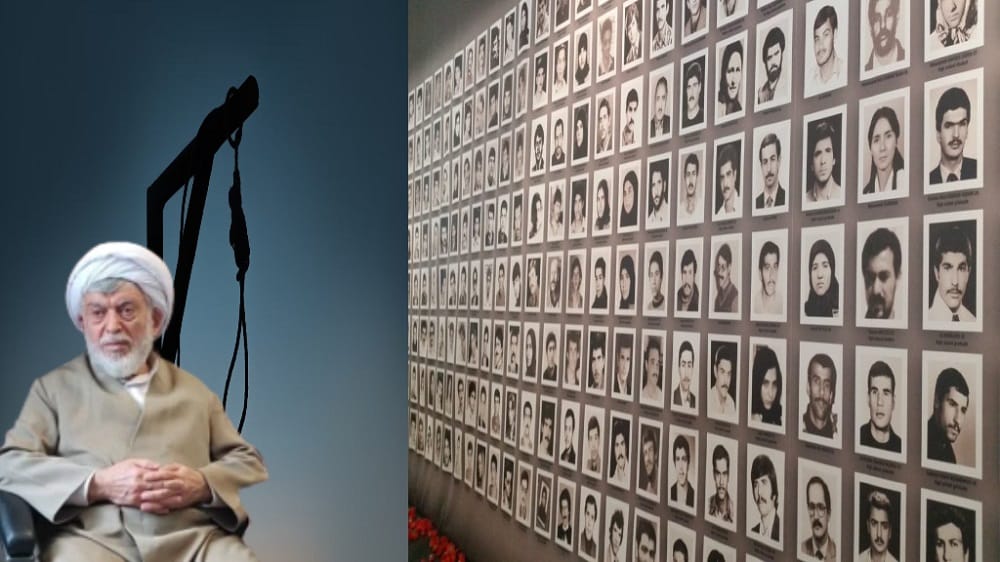 Nayeri, Head of Tehran’s Death Committee in the 1988 Massacre: If It Were Not for Imam’s Decisiveness, We Wouldn’t Have Security. Maybe the Regime Would Not Have Survived at All

On the eve of the Stockholm District Court’s verdict on the case of Hamid Noury on July 14, Hossein Ali Nayeri, the head of the Death Committee of Evin and Gohardasht prisons in 1988, spoke for the first time about the massacre of political prisoners.

In an interview with the ‘Islamic Revolution Document Center’, headed by Mostafa Pourmohammadi, another member of Tehran’s Death Committee, he said, “At that time, the situation in the country was critical. That is, if it were not for Imam’s decisiveness, maybe we wouldn’t have this security at all… the regime would not have survived at all. 50-60 assassinations a day happened in Tehran and other cities. What should have been done in such a critical situation? A decisive verdict had to be issued. The one who runs the court and has knowledge about the issues should resolve the problem. In such a situation, it is not possible to run the country by offering them kisses and huffing?’”

This is another shocking admission of the fact that Khomeini prevented the inevitable overthrow of his reign by massacring 30,000 political prisoners.

Nayeri clearly showed the regime’s desperation vis-à-vis the steadfast MEK members and supporters in prisons: “They started chaos in the prison again. they maintained their cohesion in prisons as well. Not only did they have an organizational relationship, but they also created a new organization inside the prison. By the ways they knew, they got information from the outside. They had control over the atmosphere of the prison… and therefore, there were new conspiracies… They had conspired and coordinated with the outside. That is, they wanted to continue their hostility”. Nayeri, hence, admitted that the reason for the massacre was the prisoners’ solidarity and organization and obtaining information from outside the prison.

He added, “They claimed to cause economic damage to the system; cut the phone cord; break the lamps and… The system wouldn’t be overthrown with such actions. (It is like) childish stubbornness. Like when a mother punishes the child, and the child goes somewhere and makes an annoying move. In a country that has so many expenses, will the system be overthrown by breaking four light bulbs?”

In his fatwa to massacre political prisoners, Khomeini spoke highly of Nayeri, and after the massacre until his death in June 1989, he issued several orders that instructed Nayeri to execute more people. Two of these decrees were jointly addressed to Nayeri and Raisi.

On August 15, 1988, amid the massacre, Hossein-Ali Montazeri, Khomeini’s then-successor, summoned Nayeri, as the head of the Death Committee, along with three other members of the Committee, Ebrahim Raisi, Mostafa Pourmohammadi, and Morteza Eshraghi. Montazeri told them, “History will record you among the criminals” and asked them to stop the massacre. However, they continued this egregious crime on the orders of Khomeini and other leaders of the regime.

Although there are thousands of documents and pieces of evidence about Nayeri’s crimes, and many of the witnesses and plaintiffs in Hamid Noury’s court gave indisputable testimony about his crimes, his own confessions left no doubt that he is one of the biggest criminals against humanity and that he and his accomplices should be brought to justice.

Simultaneous with announcing the verdict of Hamid Noury’s court in Stockholm, the NCRI Committee on the Judiciary is going to publish a report, containing a summary of the court proceedings in English, and available to those interested.

National Council of Resistance of Iran Committee on the Judiciary