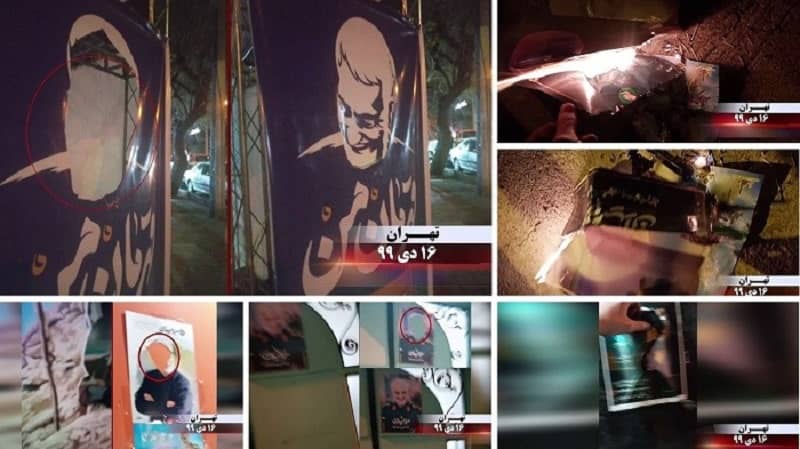 Despite the clerical regime’s security measures in the cities, supporters of the Mujahedin-e Khalq (MEK) and Resistance Units posted banners and wrote slogans containing the Resistance leadership messages, Mrs. Maryam Rajavi, the President-elect of the National Council of Resistance of Iran (NCRI), and Mr. Massoud Rajavi, Leader of the Iranian Resistance, in various cities across Iran.

Some of the slogans were: “Massoud Rajavi: Disbanding IRGC is a must for the victory of the Iranian people,” “In the war of destiny, it should be written: death or freedom,” “Massoud Rajavi: (Based on their choice), Mujahedin-e Khalq expect nothing as their given rights, except the right to make their utmost sacrifice for their people” “Down with Khamenei, long live Rajavi,” “Down with Khamenei, long live freedom,” “Maryam Rajavi: The ruling mullahs are in fear of your determination to overthrow them,” “In Iran, the roots of every crime is the IRGC and the regime’s Supreme Leader,” “Death to Khamenei – Rouhani, the cause of Coronavirus disaster and destruction,” “Down with the dictator,” “Maryam Rajavi: stand up to overthrow the regime of Velayat-e Faqih.”

On January 3 and 6, supporters of the MEK and the Resistance Units took down or destroyed posters and images of Qassem Soleimani, the notorious commander of the terrorist Quds Force. The actions were simultaneous with the regime’s propaganda ceremony on Soleimani’s death anniversary.

Secretariat of the National Council of Resistance of Iran (NCRI)
January 7, 2021

Previous article
Iran: Demolition of a Shop Owner’s Store in Tehran for Rejecting To Pay a Bribe To Regime’s Municipality
Next article
Iran: Coronavirus Death Toll in 478 Cities Exceeds 198,400