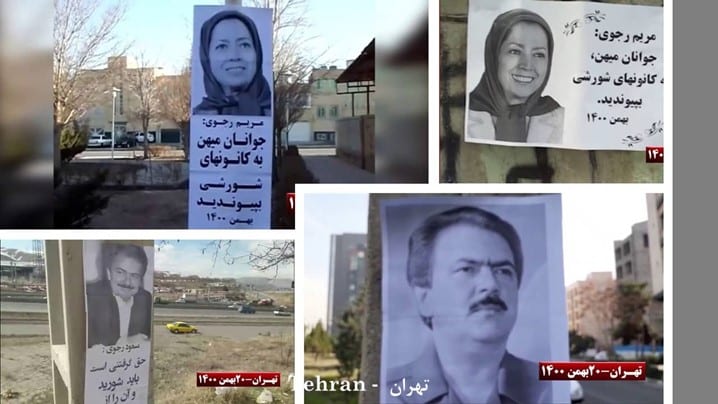 “Khamenei, Shame on You, Let Go of the Country ”

On the eve of the 43rd anniversary of the anti-monarchist revolution on February 11, 1979, supporters of the Mujahedin-e Khalq (MEK/PMOI) and the Resistance Units in Tehran and other cities including Shiraz, Isfahan, Qom, Tabriz, Ahvaz, Bandar Abbas, Abadan, Khorramabad, Babol, and Kahrizak posted banners, placards, and wrote graffiti, calling on the youth to join the Resistance Units in the fight for freedom. The activities were aimed at shattering the atmosphere of repression imposed by the clerical regime.

The slogans included, “Maryam Rajavi to Iranian Youths: Join the Resistance Units for Iran’s freedom,” “Khamenei shame on you, let go of the country,” “Massoud Rajavi: Rebels will win victory,” “Massoud Rajavi: Dissolution of the IRGC through the struggle of the rebellious youth, is a prerequisite to victory,” “Down with Khamenei, hail to Rajavi,” “Down with Khamenei and Raisi, hail to Rajavi.”

Secretariat of the National Council of Resistance of Iran (NCRI)
February 11, 2022

Previous article
Iran: Broadcast of Slogans “Death to Khamenei, Viva Rajavi,” “Iranians Are Vigilant and Hate the Shah and Mullahs,” and “Death to Khamenei and Raisi!” on the Eve of the Anti-monarchical Revolution in Shahr-e Rey (South Tehran), Sarasiab, and Fardis in Karaj
Next article
Iran: MEK, “Resistance Units” up the Tone of Their Struggle Against the Mullahs’ Regime