Iran: Regime Demolishes Graves of MEK Martyrs in Ahvaz To Eliminate Evidence of Crimes Against Humanity 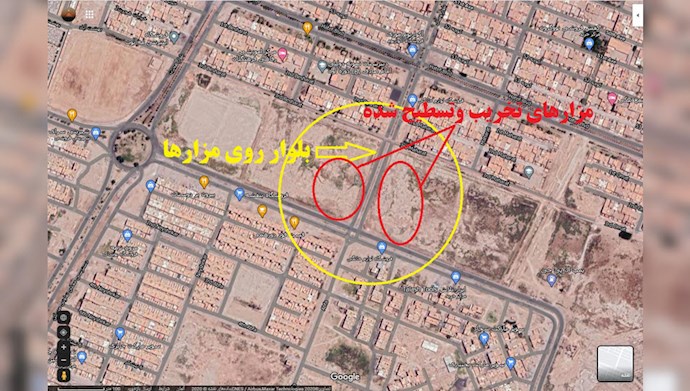 In an attempt to hide the evidence of crimes against humanity during the 1988 massacre of more than 30,000 political prisoners, the clerical regime destroyed the mass graves of Mujahedin-e Khalq (MEK/PMOI) martyrs in the Padashar district of Ahvaz under the guise of constructing a boulevard.

According to videos and credible reports from MEK sources, the Boulevard, which connects Besharat Street to Beheshtabad Boulevard, the section between Mahdis and Phase 5 of Padashahr, has been constructed over the mass graves, which used to be marked with large cement blocks that have all been destroyed.

In addition to the martyrs of the 1988 massacre, Padashahr is the final resting place of a large number of political prisoners who were executed between 1981 and 1988 by religious fascism ruling Iran. At the end of July 2018, the clerical regime destroyed the mass graves of the 1988 massacre victims and the mass graves of MEK political prisoners in Ahvaz to eliminate the traces of the evidence of crimes against humanity. The mass graves in Ahvaz were two large cemented rectangular and square blocks located in the Padashahr area.

The Iranian resistance has already exposed the evidence of the destruction of the mass graves of the martyrs of the 1988 massacre in different parts of the country. Eliminating the traces of crimes against humanity is an international crime that requires the urgent action of the United Nations Security Council and its member states, the Secretary-General, the High Commissioner for Human Rights, and the Human Rights Council as well as other human rights organizations, and the European Union.

The aerial image below shows the location of the road construction and the destroyed mass graves of the martyrs of the 1988 massacre.

Crisis in Khuzestan, the Province must be completely quarantined, Transfer of patients in Ahvaz by bus-ambulance between hospitals Alireza Zali, head of the National Coronavirus...
Read more
Statements: Iran Resistance

During the week of February 14 to 22, 2021, supporters of the Mujahedin-e Khalq (MEK/PMOI) and Resistance Units wrote slogans and posted banners carrying...
Read more