Detained Iranian protester Abbas Askari, has been brutally tortured to make false confessions. The 34-year-old man was arrested during the November 2019 protests in the city of Ahvaz, the capital city of Khuzestan province, southwest Iran.

He was caught on camera while carrying and abandoning the corpse of a teenager outside the Al-Mahdi Zargan Basij base.

College students, workers and others rally in different cities across Iran 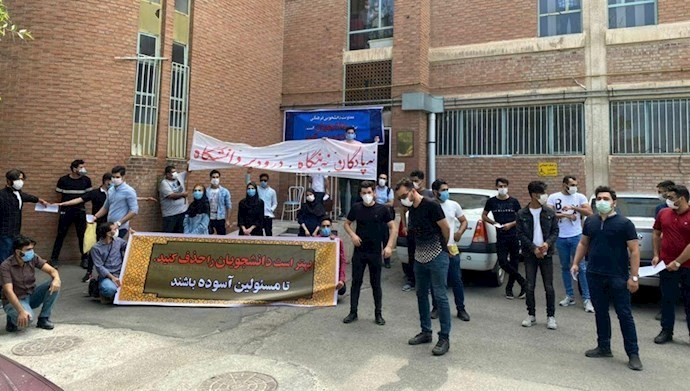 A group of students at Tehran University held a protest rally on Sunday, September 13, simultaneously with the beginning of the new school year.

The execution of the Iranian wrestling champion Navid Afkari has sparked massive reactions inside the country and abroad.

Inside Iran, various groups of political prisoners across the country, students from different universities, people from all walks of life, and even some celebrities and known figures issued statements condemning Navid Afkari’s execution.

Post Brexit Britain must take the lead on justice for Iran

Post Brexit Britain must take the lead on justice for #Iran

"The UK must follow the US, not the EU in taking a tougher stance on Iran's totalitarian regime"

Execution / Navid Afkari of #Iran: "Deeply disturbing that authorities appear to have used the death penalty against an athlete as a warning to its population in a climate of increasing social unrest" https://t.co/m4hvDyosyg pic.twitter.com/6onTkxkpZ8

“If Afkari was guilty of murder, why was the trial conducted behind closed doors and through the use of forced confessions extracted under torture?" https://t.co/JEAkY8uxIQ pic.twitter.com/vnXsacYilq

Since #NavidAfkari 's execution on Sep. 12, his 2 brothers Habib & Vahid have not been allowed to contact their families. They have been taken to the “Guidance” Section in Adelabad Prison, notorious for its horrid conditions & lack of minimum facilities. #StopExecutionsInIran pic.twitter.com/HvPrBPjiU5

In the meantime, Kurdish political prisoner Mojgan Kavousi is continuing her hunger strike in protest to prison authorities’ refusal to grant her leave during the pandemic and also because gender discrimination enforced in Evin with regard to the use of the public phones. 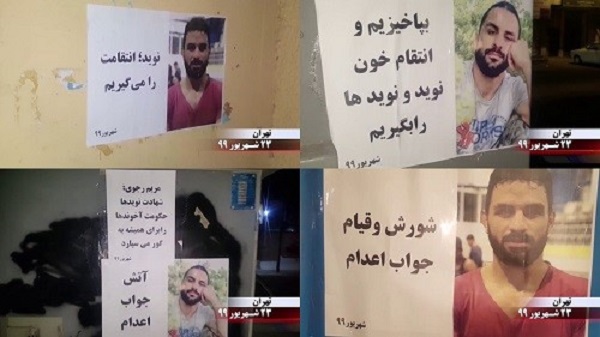 The execution of the young protester and national wrestling champion Navid Afkari, was followed by a wave of anger and abhorrence, especially among the rebellious youth. During the past two days, Resistance Units and supporters of the Mujahedin-e Khalq (MEK / PMOI) in Tehran and Shiraz, Navid’s hometown, as well as in various other cities, including Isfahan, Karaj, Shahriar, Rasht, Mashhad, Marvdasht, Lahijan, Ahvaz, Kermanshah, Abadan, and Mahshahr have posted banners, placards, and leaflets, writing slogans in public places, reaffirming their commitment to continue Navid’s path, in achieving freedom and democracy in Iran. 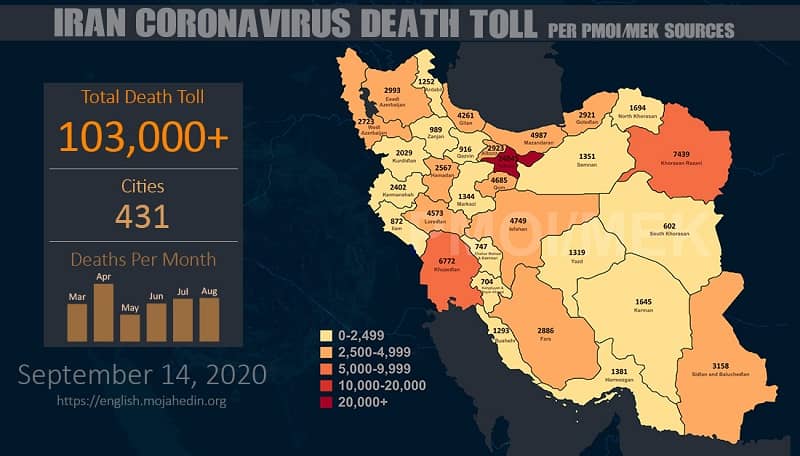 Tuesday, September 15, 2020, marks the 304th day since the beginning of the nationwide Iran protests.