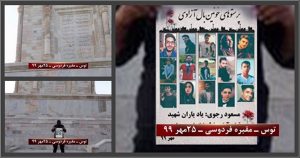 Following the call by Mr. Massoud Rajavi, the Leader of the Iranian Resistance, to commemorate the martyrs of the November 2019 uprising, Resistance Units in the Eastern Iranian city of Tous, paid homage to the martyrs of the uprising and the iconic artist Mohammad Reza Shajarian, who passed away last week,

This courageous move came while the clerical regime, in fear of public gatherings and protests in honor of Shajarian at his burial place in Tous, has imposed tight security in the city. Resistance Units and supporters of the Mujahedin-e Khalq (MEK/PMOI) held pictures of the martyrs of the uprising, photos of Shajarian, and a message addressed by Mr. Rajavi, which read, “In memory of Shajarian, who will always remain in our memories… We will always remember his most moving message, ‘death to the dictator.'”

Secretariat of the National Council of Resistance of Iran (NCRI)
October 17, 2020

Crisis in Khuzestan, the Province must be completely quarantined, Transfer of patients in Ahvaz by bus-ambulance between hospitals Alireza Zali, head of the National Coronavirus...
Read more
Statements: Iran Resistance

During the week of February 14 to 22, 2021, supporters of the Mujahedin-e Khalq (MEK/PMOI) and Resistance Units wrote slogans and posted banners carrying...
Read more