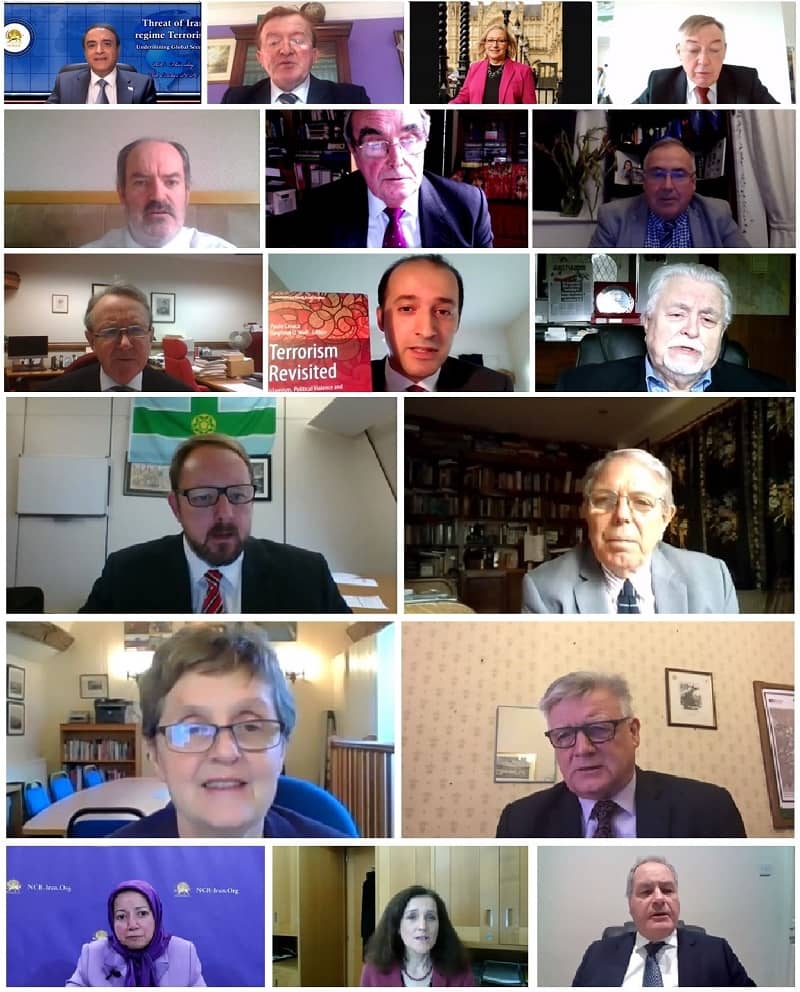 The National Council of Resistance of Iran (NCRI) has hosted several recent virtual conferences, promoting alternatives to current Western policies toward the Iranian regime. On October 7, the NCRI held one such conference, urging Europe to stop the appeasement policy of the mullahs’ regime and stand by the Iranian people. And on October 15, it hosted another with explicit focus on British and Irish politics.

Several lawmakers participated by sharing remarks explaining their support for the Iranian Resistance movement and outlining the perceived flaws in current British foreign policy in dealing with Tehran. The real concern is that the European countries, including U.K. continue appeasing mullahs’ regime, thus emboldening mullahs’ by not holding them to account for their crimes.

These concerns have been amplified by the looming court date for a high-ranking Iranian diplomat-terrorist, Assadollah Assadi, who masterminded a terror plot on European soil just over two years ago. Assadi was arrested in July 2018 after three operatives in his employ were arrested before being able to detonate an explosive device in France, where NCRI held its annual “Free Iran” gathering.

After the plot was disrupted by European authorities, investigations established that Assadi had personally provided his operatives with the detonator and the 500 grams of TATP explosive that were to be used in the attack. The French government also released a report later in the year which noted that the plot had been designed with the full knowledge and consent of leading Iranian regime’s institutions. And last week it was reported that this finding had been corroborated by authorities in Belgium, where Assadi is facing terrorism charges.

Assadi is the first on duty diplomat of the regime to actually be prosecuted in this fashion. All the whilea great many of the regime’s diplomats operate as intelligence agents and sleeper cells, pending orders for new terrorist acts. However, direct participation in such acts is usually assigned to the regime’s operatives. Assadi’s personal role is, by all accounts, unusual, and the recent conferences offered insight into the reason for the change in tactics.

In the previous week’s European conference, Lithuanian MEP Rasa Juknevičienė pointed to the recent trend in Iran’s domestic repression and said, “The regime resorts to these types of crimes out of desperation because Iran’s situation is explosive. Daily protests continue unabated in Iran.”

.@Rjukneviciene: Iran's people don’t want this regime and are vehemently opposed to it. On the other hand, a powerful alternative exists, meaning that change in Iran is imminent. #NoImpunity4Mullahs https://t.co/Luwf0Puj4N

Thursday’s conference with a heading that refers to Iranian terrorism as “undermining global security,” the majority of participants in the conference remained focused on foreign policy as it relates to British interests specifically. And toward that end, they also repeated the points made by lawmakers from other European nations regarding the persistent threat of plots much like Assadi’s.

Indeed, the plot against the 2018 gathering in France was not even unique at the time. Just over three months earlier, Iranian agents were found to be planning an attack on an Albanian compound housing 3,000 members of the People’s Mojahedin Organization of Iran (MEK/PMOI). As well as being thwarted by law enforcement, the event led to deportation for Iran’s ambassador to Albania and another Iranian diplomat. This in turn underscores the point that one spokesperson for Belgian investigators made after Assadi’s arrest: that the vast majority of Iranian consular officials are actually operatives in the regime’s Secret Service.

Not holding the regime to account will only embolden it to continue terrorism abroad. And this was but guaranteed by Assadollah Assadi in his conversations with Belgian investigators. Recent reporting indicates that as part of an effort to escape prosecution, he explicitly warned that Iran-backed terrorist groups were watching from the sidelines to see whether the Belgian government would “support them,” before deciding where to direct future attacks.

As the British and Irish lawmakers emphasized that the Iranian regime expects “impunity” even regarding attempted attacks on Western soil, and that this expectation will persist until Tehran faces serious consequences for its prior wrongdoing.

Previous articleIran’s Regime Smuggles Medicine To Iraq, While Complaining About Sanctions
Next articleIran: Resistance Units Pay Homage To the Martyrs of the November 2019 Uprising, the Iconic Singer Mohammad Reza Shajarian

This past Tuesday, the Belgian parliament held a committee hearing on Foreign Affairs, very nearly one month after the conclusion of a terrorism trial...
Read more
Iran Opposition & Resistance

On Wednesday, the Organization of Iranian American Committees (OIAC) held a meeting on Zoom. Participants were given the opportunity to listen to remarks from...
Read more