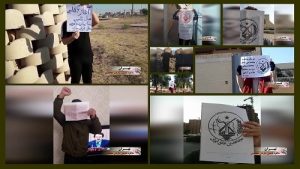 The slogans displayed in public during last week’s campaigns included: “On behalf of the youth of Tehran: Congratulations on the anniversary of the foundation of the MEK,” “Greetings for 56 years of MEK’s resistance and perseverance,” “greetings to the great founders of the Mujahedin-e Khalq for 56 years of sacrifice. Congratulations,” “Maryam Rajavi: The MEK is determined to overthrow the anti-Iranian clerical regime,” “Believing that the only path to freedom is to rise, and to fight for it. We, the rebellious youth from Shiraz, are with you. We will overthrow Khamenei’s regime,” “The only way to freedom is to rise and protest,” “Down with Khamenei, hail to Rajavi,” “Join the Resistance Units,” “Hail to MEK, hail to freedom, down with Khamenei,” “Massoud Rajavi: From the onset, the MEK said that Islam is a religion of freedom, and Khomeini and Khamenei are the greatest enemies of Islam,” “Down with Khamenei, hail to MEK, hail to Rajavi,” “The MEK has dedicated itself to the liberation of its homeland.”

Secretariat of the National Council of Resistance of Iran (NCRI)
September 12, 2020

Previous articleIran News in Brief – September 13, 2020
Next articleDr. Kazem Rajavi’s Assassination To Be Investigated in the Context of Genocide, Crime Against Humanity