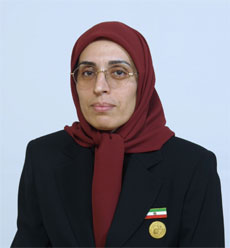 NCRI – In its annual Congress in Camp Ashraf, Iraq, simultaneous with the 47th anniversary of its founding on September 6, 1965, the People’s Mojahedin Organization of Iran (PMOI), also known as the Mujahedin-e Khalq (MEK), elected Ms. Zohreh Akhyani as its new Secretary General for a two-year term. Ms. Sediqeh Hosseini, the outgoing Secretary General chaired, the Congress, which elected Ms. Akhyani among 11 candidates.

Ms. Akhyani is 48 years old and from the city of Shahroud, northeast Iran. She has a daughter aged 29.
The new Secretary General joined the PMOI 32 years ago following the anti-monarchic revolution in Iran in 1979. She was elected as a deputy to the Executive Committee in 1989 and became a full member three years later. In 1993, she was elected as a member of the PMOI’s Leadership Council.  Ms. Akhyani was the representative in Germany of the National Council of Resistance of Iran (NCRI) from 1997 to 1999 and Deputy Secretary General from 2001 until 2011.

According to PMOI’s by-laws, the Secretary General is elected through three ballots. In the first ballot, members of the Leadership Council and in the second ballot members of different directorates and departments cast their secret vote. The third ballot is cast in a public vote in the plenary session of the PMOI Congress
In the first ballot on August 5, Ms. Akhyani received the majority vote of the Leadership Council. In the second ballot on August 30, Ms. Zohreh Akhyani received an absolute majority vote of 67.5%. In the third ballot, where all those present in the plenary session of the PMOI Congress voted with raising their hands, Ms. Akhyani received the unanimous vote.

The new Secretary General said: “This election is a reflection of the perseverance, wherewithal and strength of the PMOI ranks and organizational structure, which today embodies the Iranian people’s historic aspirations for  democracy and people’s sovereignty,” adding, “I undertook this sensitive responsibility only with the help all PMOI members.”

Mrs. Maryam Rajavi, President-elect of the Iranian Resistance, congratulated Ms. Akhyani’s election and added that this election reflected the PMOI’s democratic set of relationships within, its blossoming, strength and prowess as the principal organized opposition movement to the clerical regime, especially at the time when the ruling theocracy is engulfed in a power struggle and crisis and terrified of being overthrown.

Mrs. Rajavi said this election sends the Iranian people the message to rise up and stand against the ruling religious dictatorship until final victory.

Click on this link to view a short video:
https://www.youtube.com/watch?v=UACjjV12oUo

Previous articleIranians have spent more than 4 months in front of UN Headquarters in Geneva demanding protection of Camp Ashraf
Next articleIran: 14 executions in Orumieh, Kerman, Ahwaz and Qazvin, and mass arrests in various cities