While the Campaign for Justice Over Iran’s 1988 Massacre Goes on, Any Attack on Amnesty International for Disclosing the Facts Is Tantamount To Assisting the Mullahs’ Intelligence Ministry and the Perpetrators in Their Objective 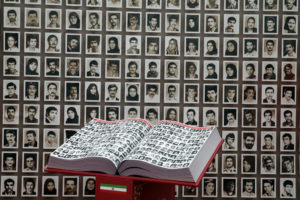 Three decades after the 1988 massacre of political prisoners in Iran, which took place on the orders of Khomeini, Amnesty International has addressed these “ongoing crimes against humanity” and their “blood-soaked secrets.” Naturally, the religious fascism ruling Iran and the instigators, perpetrators, agents, and mercenaries of the regime are not happy with these facts and are using any pretext to undermine and object to the report.

They include the collaborators of the henchman of Evin Prison, Asadollah Lajevardi, and agents and infiltrators such as Iraj Mesdaghi, who with utmost pettiness are questioning Amnesty International for interviewing members of the People’s Mojahedin Organization of Iran (PMOI or MEK) in Albania who are surviving witnesses of the 1988 massacre and not censoring the identity of the MEK’s martyrs as the regime would like. The obscenities and slander by such mercenaries against the lawyers, investigators, and rapporteurs of Amnesty International know no bounds and reflect the enmity of the mullahs’ Gestapo.

They are also challenging Amnesty International for bringing up the knowledge and complicity of Khomeini’s Prime Minister about this great crime against humanity at the time of the massacre.

The National Council of Resistance of Iran (NCRI), including the MEK whose members account for 90 percent of the martyrs of the 1988 massacre, explicitly states that in the midst of the call for justice campaign, any attack on Amnesty International for following up and disclosing the facts is tantamount to assisting the mullahs’ Ministry of Intelligence and Security (MOIS) and the perpetrators of the 1988 massacre in their objective.

No honorable human being who seeks justice for the martyrs and no political person or group that does not seek to trample on the blood of the martyrs would attack Amnesty International over this issue or reduce the responsibility of the perpetrators of crimes against humanity. On the contrary, they would demand that the facts, especially the exact number of martyrs and their burial places, be fully clarified, the massacre’s dossier be referred to the United Nations Security Council, a special international tribunal be set up for this great and continuing crime, and the regime’s leaders be brought to justice.

Secretariat of the National Council of Resistance of Iran (NCRI)
September 11, 2020