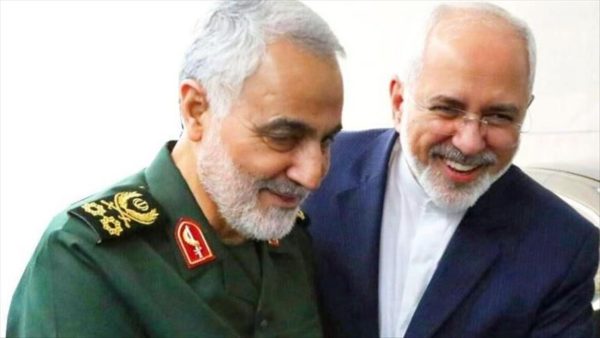 Zarif and Soleimani, are two sides of the same coin

Written by Mahmoud Hakamian on 10 February 2020.

While Iran is refusing to send the black box of the Ukrainian passenger plane that was shot down by  Iran’s Revolutionary Guards in January, Iran’s Foreign Minister Mohammad Javad Zarif said there are no legal bases to hand over the black box.

According to New York Times “Canada’s complaint about a Ukrainian passenger plane that was mistakenly shot down by Iran’s Revolutionary Guards in January has no legal basis, Iranian Foreign Minister Mohammad Javad Zarif said on Tuesday, according to Iranian media reports. “Iran’s actions are based on international rules,” Zarif said, according to the Khabaronline website.”

A the same time, Mohammad Javad Zarif, the Foreign Minister of the Iranian regime, has been invited to attend the Munich Security Conference scheduled for February 14 to 16. This is a mistake along the lines of Europe’s long appeasement of the mullahs’ regime, as it provides Zarif – known as Tehran’s chief apologist – a platform to spread the regime’s propaganda.

In early January the U.S. denied Zarif a visa that would have allowed him to attend a United Nations Security Council meeting in New York on January 6. This was a correct decision by Washington, especially following Zarif’s supportive remarks of Qassem Soleimani, the terrorist commander of the Iranian regime’s Revolutionary Guards (IRGC) Quds Force chief killed days before in a U.S. airstrike.

To add insult to injury for Tehran, Saudi Arabia barred an Iranian regime delegation from an Organization of Islamic Cooperation (OIC) meeting in Jeddah on Monday, February 3, where recent regional developments were discussed.

Looking back, it is worth noting that Zarif used his 2019 visit to the Munich Security Conference as a medium to voice his known hypocritical claims and literally threaten Europe.

“Iran cannot foot the entire bill for vital global security achievements, whether it is the nuclear accord or the combating of drugs and human trafficking from our region to Europe,” he said.

Despite making such blatant intimidations, Zarif continues to be described as a “moderate” by pro-Iran appeasement circles in the West who seek short-term economic interests. The recent killing of Soleimani, however, has shed further light on Zarif’s true nature.

The people of Iran and millions across the globe rejoiced Soleimani’s death, recalling how he personally supervised havoc across the Middle East, from Iraq to Syria, Yemen, and Lebanon.

Zarif, however, was one of those individuals who wholeheartedly mourned Soleimani’s death. This further exposes the reality that “moderation” and “moderates” inside the Iranian regime are fictional and Tehran’s apologists, such as Zarif, and terrorists, like Soleimani, are merely two sides of the same coin.

Zarif, as a close friend of Soleimani, wrote a telling tweet ending with a specific threat: “The US’s act of international terrorism, targeting & assassinating General Soleimani – the most effective force fighting Daesh Al Qaeda et al – is extremely dangerous & a foolish escalation. The US bears responsibility for all consequences of its rogue adventurism.”

In an interview with Iran’s state-run Entekhab daily on September 1, 2019, Zarif specifically boasted about having “the greatest coordination with commander Soleimani” and how the two “decided to make sure we meet at least once a week.”

Recalling the last visit by Syrian dictator Bashar Assad to Tehran, Soleimani was the man who attended the meeting between Assad and Iranian regime President Hassan Rouhani, while Zarif was left out. This prompted a farce resignation by Zarif.

Important, however, is the fact that it provided further proof to the world that Zarif is merely a pawn of Khamenei’s regime and his authority stood far below that of Soleimani. His “coordination” with Soleimani is, in fact, better described as Soliemani’s dictation of new instructions to Zarif every week.

Zarif’s support for the Iranian regime’s terrorism campaign is not limited to his relationship with Soleimani. Following the U.S. designation of the IRGC as a “foreign terrorist organization” in April 2019, Zarif went to the IRGC’s headquarters and expressed his full support for this entity and described the meeting as an “honor” for him.

While Europeans continue to allow Zarif’s presence on their soil, it is worth noting how Zarif leads an army of regime diplomat terrorists. The Iranian regime Foreign Ministry, under Zarif’s watch, actively provide diplomatic cover for Tehran’s terrorists and facilitate their operations.

Back in June 2018, the Iranian regime’s so-called “diplomat” Assadolah Assadi and three other terrorists were arrested, while attempting to bomb the annual “Free Iran” gathering held by the National Council of Resistance of Iran (NCRI) in Paris.

Zarif’s European trip in August 2019 was met with various protests by Iranians. Following these protests, Zarif became angry and threatened the Iranian dissidents with death, saying they will be “eaten alive” if they return to Iran.

The NCRI had issued a statement prior to Zarif’s European tour, describing the event as a medium used by Tehran to “embolden the regime to continue and step up the flagrant and systematic violations of human rights and the export of terrorism and warmongering.”

It is common knowledge that Zarif represents Iran’s regime, known to have the highest number of executions per capita, be the world’s leading state sponsor of terrorism, the primary source of crisis and chaos in the Middle East region and beyond, and continues to be the main patron of Syrian dictator Bashar Al-Assad in his massacre of the people of Syria. Zarif, the “moderate,” literally boasts about his strong ties with such figures as Hezbollah chief Hassan Nasrallah, Imad Mughniyah and Qassem Soleimani.

“The Iranian theocracy is based on the concept of Velayat-e faqih, or absolute rule of the supreme leader. Every official is vetted for allegiance to him, and Ali Khamenei himself handpicks several ministers, including the foreign minister. So it is unsurprising that Zarif has been complicit for years in the Iranian regime’s malign activities. He has not only been the face and voice of the ayatollahs’ rule, but he has also personally worked to implement Khamenei’s reckless agenda and to justify and whitewash Tehran’s crimes at home and abroad. In reality, he is more of a propaganda minister than a foreign minister,” argued former Norwegian MP Lars Rise In an opinion piece for International Policy Digest back in August 2019.

According to the Hezbollah-affiliated Al-Manar TV network, Zarif pledged to continue support for Hezbollah, although the Iranian regime itself anticipated 70 percent of the Iranian people sliding under the poverty line by the end of 2019. Reports indicate Zarif’s Foreign Ministry provides a $100 million to Hezbollah.

Zarif himself is no stranger to crimes against humanity committed by the mullahs’ regime throughout its history. He was an active senior career diplomat in Tehran’s UN mission back in 1988 while the mullahs’ regime was sending over 30,000 political prisoners – mostly members and supporters of the Iranian opposition People’s Mojahedin Organization of Iran (PMOI/MEK) – to the gallows at a rate of around 150 a day.

The appeasement policy pursued by governments on both sides of the Atlantic has allowed Zarif to pursue a two-faced game for the mullahs’ regime over the years. With that policy coming to an end in the U.S., Tehran has been desperate to find a light at the end of the tunnel during the tenure of U.S. President Donald Trump.

AN OPPORTUNITY FOR EUROPE TO MAKE THE RIGHT CHOICE

Following visa denials for Zarif in the U.S. and the Iranian regime’s delegation to Saudi Arabia, Europe should show it stands alongside the Iranian people by denying Zarif and other regime officials any entrance onto their soil. 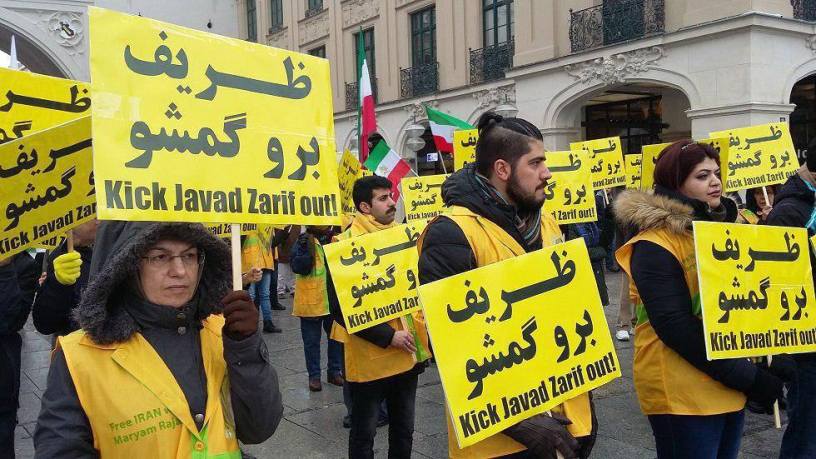 Receiving a state visit from Iranian regime diplomat-terrorists such as Zarif is unethical, to say the least, and sends a very disturbing message to the Iranian people who are constantly in the streets, risking their very lives to voice their desire for an end to the mullahs’ rule.

The Iranian people will not forget who stood by their side in their time of need and who rolled out the red carpet for Iran’s chief apologist Zarif to blare the mullahs’ propaganda. Europe should choose wisely.