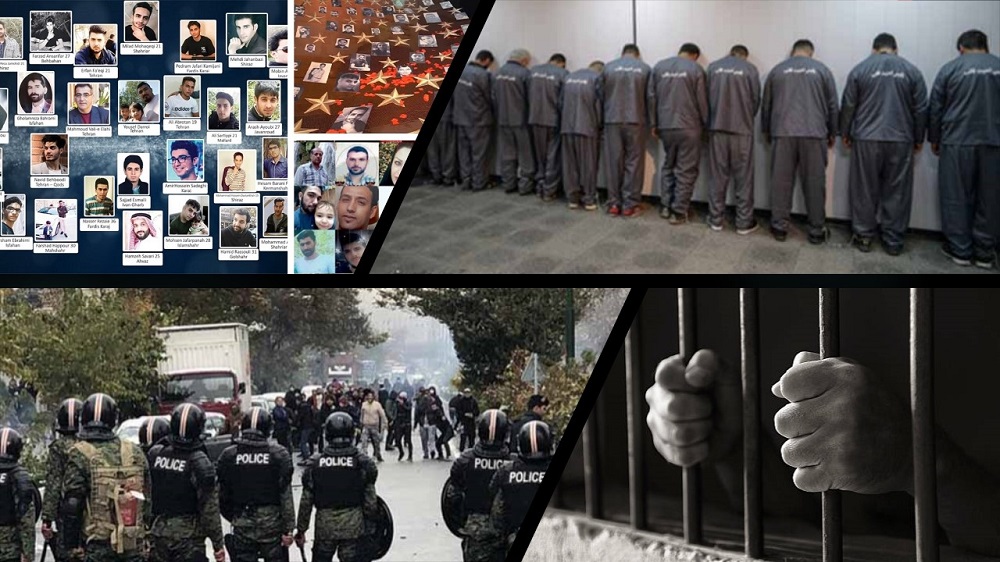 Iranian regime imposed a deadly crackdown on hundreds of thousands of outraged people of Iran who flooded onto the streets to show their discontent over the hikes in gasoline prices in November 2019; killing 1500, wounding 4,000 and arresting 12,000. Now the regime issues lengthy sentences for the detained protesters

In mid-November 2019, the Iranian regime responded harshly to hundreds of thousands of outraged people of Iran who flooded onto the streets to show their discontent over the hikes in gasoline prices. The significant expansion of uprisings in more than 190 cities and towns across the country and explicit demands for overthrowing the corrupt system prompted the regime’s authorities to do whatever it takes to suppress the nationwide Iran protests.

#Iran: Lengthy Prison Terms for Those Arrested During the November 2019 Uprising https://t.co/T90ZYecptO#IranProtests#FreeIran2020#FreeAllProtesters

At dawn on November 17, the regime’s supreme leader Ali Khamenei ordered the Revolutionary Guards (IRGC) and security forces cracking down on demonstrators at all costs. “Every wise man who loves his comfort life shouldn’t support [protesters],” Khamenei remarked in his primary lecture on November 17. Therefore, Khamenei unveiled his decision for killing protesters who only pursued their basic rightful grievances.

In this respect, security forces murdered more than 1,500 demonstrators on the streets in addition to arresting more than 12,000 people. The regime’s officials have yet to announce the true death toll, however, the fate of thousands of detainees is still unclear. Notably, many lifeless bodies of disappeared youth have been found lying on the streets, lakes, canals, etc. in recent months. The impact of torture was seen on the discovered bodies, which proves they didn’t lose their lives of natural causes.

Additionally, the regime’s Judiciary system has issued excessive sentences for detainees of the November protests, who are still alive. Remarkably, the Judiciary is presided by a notorious executioner Ebrahim Raisi who is one of the main perpetrators of the 1988 massacre of 30,000 political prisoners. Some of the sentences are as follows:

Branch 1 of the court in Shahryar sentenced Milad Arsanjani to five years in prison. Judge Barjasteh convicted Arsanjani on the charge of “collusion and association against national security and propaganda against the state.”

Another protester Kianoush Jamali, who was arrested by Sarallah base of the IRGC on November 18, has been sentenced to seven and a half years in prison. The 27-year-old detainee was sentenced by Judge Babaei, the chief of Branch 26 in Tehran, for “collusion and association against national security and propaganda against Khamenei and [the regime’s president Hassan] Rouhani.” Security forces held Mr. Jamali in solitary confinement for more than 25 days after arresting him during a demonstration.

Two mentioned detainees are in “Tehran Central Prison” and were informed about their punishment on February 5. Also, the supporters of the People’s Mojahedin Organization of Iran (PMOI/MEK) reported that hundreds of arrested protesters are imprisoned in Tehran Central Prison, which also known as “Fashafuyeh Prison.” Due to pressures and threats by security forces, many families of detainees don’t dare publish information about the detention of their loved ones.

Eyewitness reports say that the regime’s oppressive apparatus captured more than 400 protesters in the suburbs of Tehran, including Shahryar, Islamshahr, Quds district [Qal’eh Hassan Khan], Malard, and Robat Karim. Many detainees are between 18 and 25 years old and usually from impoverished segments of society.

Furthermore, a number of protesters were arrested in a state of injury. Jafar Rezaei, Reza Allahyari, Siamak Paymard, and Vahid Najafi Khoubestani, who was shot by security forces, are still held in horrible conditions in Fashafuyeh Prison.

On January 18, the President-elect of the National Council of Resistance of Iran, Mrs. Maryam Rajavi expressed her concerns about conditions of detained protesters during the November protests. “Once again, I urge the United Nations Secretary General to dispatch an international fact-finding mission to Iran to investigate the conditions of death and injury of protesters in November and visit Iranian prisons and prisoners,” Mrs. Rajavi said in a statement on the same day.

I urge the UN Secretary General to dispatch an international fact-finding mission to investigate those killed and injured, and visit Iranian prisons and prisoners #Iranhttps://t.co/js5SQPFwki pic.twitter.com/yktCLUIZEZ