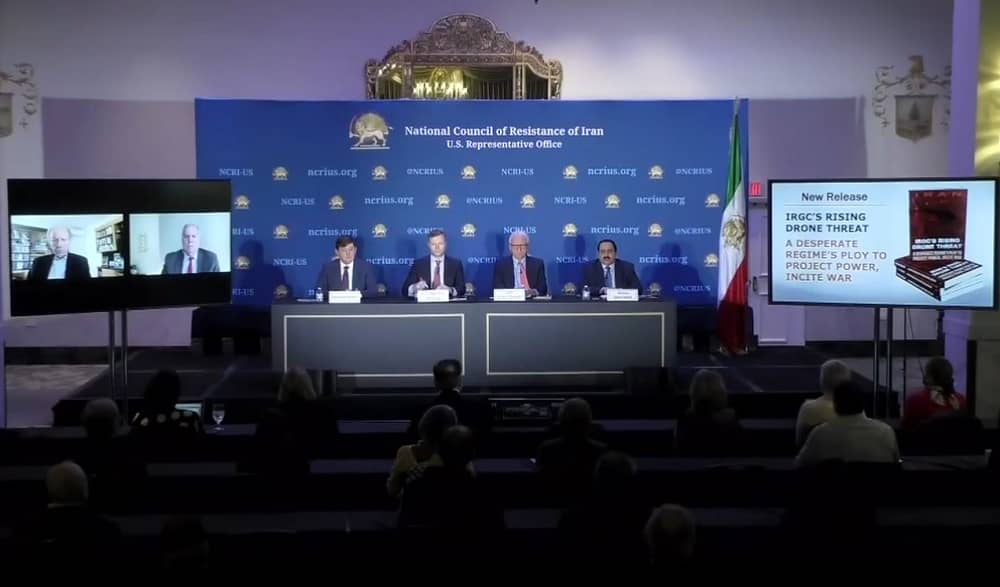 On Wednesday, This event was attended by renowned American politicians and experts, who underlined the necessity to counter Tehran’s malign activities by increasing pressure on the regime.

This event was moderated by Alireza Jafarzadeh, the NCRI-US Deputy Director. In his remarks, Mr. Jafarzadeh underlined that in “IRAN: IRGC’s Rising Drone Threat; A Desperate Regime’s Ploy to Project Power, Incite War,” book the Iranian Resistance reveals “for the first time a number of Revolutionary Guards (IRGC) front companies running the regime’s drone program. These companies have civilian names but are in service of the IRGC. They provide parts and accessories for the UAV program. They are doing what the IRGC can’t do itself. They are helping the IRGC circumvent sanctions. It’s a smuggling ring.”

Mr. Jafarzadeh underlined the need to “deal with firmness to this regime. It should be granted no sanctions relief. It is imperative to reinstate all UNSC resolutions.”

This call to firmness was reiterated by other participants of Wednesday’s conference. “We have to change course toward Iran not only to limit its threats but also to use this opportunity to tell our friends and enemies that we’re willing to be tough,” said Senator Joe Lieberman, a former U.S. Senator, and Presidential candidate.

Senator Lieberman, a longtime Democrat, also criticized the weak approach of the current U.S. administration regarding Tehran’s nuclear program. “I think we’re on the wrong course, we the United States, in our efforts in Vienna to reenter the JCPOA,” he said. He emphasized that these efforts “don’t meet the reality of what Iran is doing, either in Vienna or in Iran or throughout the region or the world. And I think they’re in that sense unrealistic and risky, highly risky. So, I’ll talk in a moment how I hope they’ll be changed.”

.@MatthewKroenig: The regime needs to understand that if it remains on its current path, there will be consequences. Supporting the democratic aspirations of the Iranian people is important. #Iran #IranTalkshttps://t.co/y1qZ24Z86e

Senator Lieberman underlined that “it’s not only important that the United States change and toughen our position, in fact, to step back from the JCPOA in negotiations as they’re constituted now in Vienna, but generally be tougher with Iran.”

This call was endorsed by Ambassador Robert Joseph, former Under Secretary of State for Arms Control and International Security, underlining that the Iranian regime’s extortion campaign reflects the regime’s weakness.

“This is a deplorable regime that wants the United States, Europe, and others to focus not on its internal vulnerabilities, but on the JCPOA negotiations, as those negotiations provide both a sense of legitimacy and a convenient diversion from its desperate domestic situation. And if successful, the result will serve as a lifeline for Iran’s rulers,” he said. He also emphasized that the selection of Ebrahim Raisi, a known human rights violator, shows “the mullahs’ moral bankruptcy.”

David Shedd, the Acting Director of the Defense Intelligence Agency (2014–2015), also attended this event. He underlined that “The Iranian regime since 1979 has had a very expansive definition of what it believes constitutes a foreign policy by being consistently on the offense.”

“How do we respond? The last thing you want to do is to take the foot off the proverbial petal of pressure on the regime. The thought that any kind of lifting of sanctions of the regime will result in a kind response is false,” Mr. Shedd offered this solution.

Matthew Kroenig, Ph.D., American political scientist, and national security strategist also shared his opinion on Iran’s rising threats. He underlined that once Tehran acquires a nuclear bomb, “it will engage in more aggressive policies in the region. And it can trigger a nuclear war. This is something they’ve been working on for more than 20 years.”

He underlined that there should be “a stronger pressure track.” “The regime needs to understand that if it remains on its current path, there will be consequences. Supporting the democratic aspirations of the Iranian people is important. And finally, we must keep a military option on the table as a last resort to prevent Iran from building a nuclear weapon.”

The last speaker of Wednesday’s event, was Mr. Jonathan Ruhe, JINSA Director of Foreign Policy. Mr. Ruhe referred to the Iranian regime’s increasing threat of UAVs and missiles programs. “Iran’s ability to proliferate these capabilities in the region is also important. It encircles the Middle East with overlapping fields of fire. You have to have a 360 perspective which complicates air defense.”

“Iran’s drones are becoming weapons of mass effectiveness. The attack on the Saudi Abqaiq facility was Iran’s proof-of-concept regarding its drone capability. This attack could have been much, much worse. Since that attack, we’ve seen drones becoming central to Iran’s projection of power in the region,” he added.

Like other speakers of this event, he underlined that there should be “genuine sanctions enforcement on Iran’s capabilities to procure the material for these activities.”

This conference and its participants once again highlighted that Iran’s regime only understands the language of firmness and giving this regime any concession would help it to increase its destabilizing actions across the globe.