Hossein Taeb, the former commander of the IRGC-IO, was booted from his position after 13 years, following a series of assassinations of the IRGC’s commanders and numerous operations by the Iranian Resistance Units against the regime’s centers of oppression. Sacking Taeb,  a confidant of the regime’s Supreme Leader Ali Khamenei and his son Mojtaba reveals the depths of what Khamenei describes as the “crisis of infiltration” in the regime’s security apparatus.

Since its foundation in 2009, the IRGC-IO has been under Khamenei’s direct supervision, operating as a parallel security organization to the regime’s Ministry of Intelligence and Security (MOIS). According to the regime’s constitution, a mullah should be the Minister of intelligence. Thus, Khamenei appointed Taeb as the IRGC-IO chief. But he was forced to dismiss him despite the fact that he controlled a vast intelligence apparatus.

More about Taeb in our recent in-depth report.

Taeb proved his loyalty to Khamenei by crushing domestic dissent at home and exporting terrorism abroad. But when the vast scope of assassinations by the regime’s foreign adversaries and the operations by the Iranian Resistance mounted, Khamenei recognized the faltering state of the IRGC-IO. To end the “crisis of infiltration,” he appointed Kazemi as the IRGC-IO new chief. But who is Kazemi?

Before being appointed as the new head of the IRGC-IO, Mohammad Kazemi was not a public figure. He has been in charge of the IRGC’s Intelligence and Information Protection Unit since 2009. This unit acts as the IRGC’s counterintelligence organization and is responsible for identifying spies and fighting infiltration in the regime’s security apparatus. So, the organization operates in shadow. Therefore, Kazemi is not a public figure. Yet, he is very close to Khamenei and deeply trusted by him.

Kazemi had tried to prevent the leaking of confidential information outside the IRGC while in charge of the political-security surveillance of the IRGC commanders and its personnel.

According to the information obtained by the Iranian Resistance, Kazemi is considered the IRGC’s highest official. He vets all the IRGC commanders and approves all missions. Even Khamenei’s Chief of Staff, Mohammadi Golpayegani, and his closest colleague, Vahid Haghani, are not allowed to make any changes in the regime’s security apparatus without Kazemi’s consent.

The IRGC Directorate for Information Protection was established in 1983 and expanded rapidly.

This institution is the IRGC’s internal intelligence, tasked with countering espionage inside the force, preventing infiltrations, protecting confidential information, and monitoring its personnel.

Khamenei directly appoints commanders of this organization through the IRGC’s commander in chief. 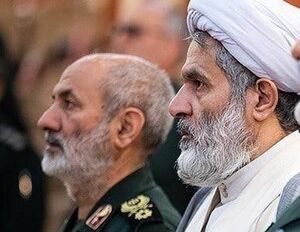 “Mohammad Kazemi has been in charge of the IRGC secret box. Khamenei’s emphasis on preventing the enemies’ ‘infiltration,’ offers some insight into his appointment,” the state-run Iran Dideban wrote on June 23.

While Kazemi has failed in recent years to prevent infiltration in the IRGC, Khamenei appointed him as the new head of the IRGC-IO. Wouldn’t it have been better to select a more “capable” figure?

But capability takes a back seat to Kazemi’s “loyalty” to Khamenei and his “cruelty” in dealing with the intruders and spies. Unlike Taeb, who lost his credibility after hundreds of failed operations, Kazemi is highly trusted by Khamenei and his son Mojtaba.

Therefore, Kazemi will focus on countering espionage and crushing any voice of dissent inside the IRGC. But this cannot ultimately help Khamenei because the recent developments in Iran underscore that the entire IRGC-IO is like a “beehive” filled with agents and spies of the regime’s adversaries. The recent arrest of IRGC Brigadier General Ali Nasiri, a top security official, is a testament to Khamenei’s failure to “clean up” the IRGC-IO and unify them. Khamenei should dismantle IRGC-IO or cope with infiltration, but doing so would be a severe blow to its machinery of oppression. So, it is safe to say he is in a “Security deadlock” as more protests expand across the country.