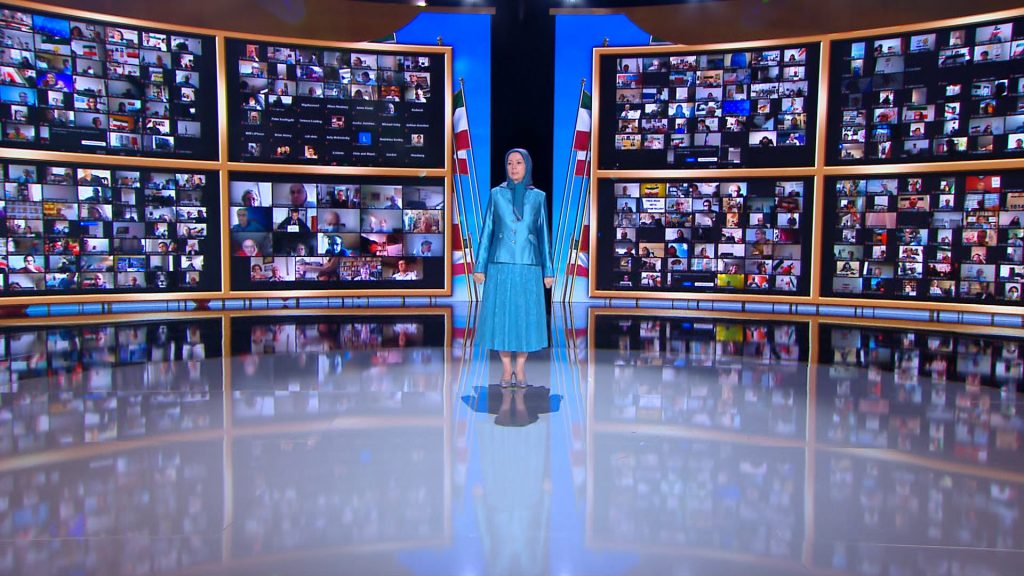 Last month, The National Council of Resistance of Iran (NCRI) held its annual “Free Iran Global Summit”. It served to review the Iranian regime’s crimes and to highlight the advances that have been made in recent years by activists inside Iran. The Free Iran Global Summit was the latest in a long series of challenges to the Iranian regime’s propaganda that portrays the theocratic system as having a firm hold on power, with no viable alternative competing for national leadership.

The National Council of Resistance of Iran has been presenting these challenges in the form of international rallies every summer since 2004. This year’s event was held virtually due to the coronavirus pandemic. It linked together approximately 30,000 locations in more than 100 countries, some of which featured thousands of assembled representatives of local Iranian expatriate communities. The online format arguably did even more than previous gatherings in Paris and Albania to highlight the truly global reach of the NCRI.

Because of the breadth of that reach, the NCRI also boasts a long and growing list of political supporters from the United States, the European Union, and much of the world. Hundreds of them have become regular attendees at the NCRI’s summer gatherings and supporting Iranian people’s struggle for freedom, and hundreds participated in the Free Iran Global Summit by delivering speeches over video calls. In so doing, various lawmakers and policy experts emphasized the very real prospect for regime change leading to a transitional government.

Yet, for years, due to the appeasement policy, western governments have ignored the Iranian people’s desire for a free country and presence of a viable alternative. On the other hand, this sort of willful ignorance has become less and less defensible among those who stand to benefit most from it: the leadership of the Iranian regime. The July summit and its most recent predecessors have all served to counter Iranian state media’s efforts to downplay the popularity and organizational strength of the Resistance movement, especially in the wake of multiple domestic uprisings.

Tehran recognizably began paying more attention to the NCRI’s gatherings in 2018. It was then that two Iranian operatives were captured on the Belgian border, attempting to enter France with 500 grams of TATP explosive, en route to the rally at Villepinte, near Paris. At the time, Iran was in the midst of what NCRI’s president-elect, Mrs. Rajavi had referred to as a “year full of uprisings,” following a nationwide protest movement that began in the final days of 2017 and quickly gave rise to chants like “death to the dictator” in approximately 150 localities. The mullahs responded by growing so fixated on the suppression of dissent that they were willing to put regime’s international relations at severe risk in order to disrupt the greatest symbol of the Iranian Resistance influence.

Fortunately for both the Iranian Resistance and the many countries whose citizens and policymakers were present at the event, the scheme was effectively thwarted. But it still remains to be seen what, if any, long-term impact the incident will have on European strategies for dealing with the regime. The mastermind of the terror plot, one of the regime’s so-called “diplomat” named Assadollah Assadi, is currently on trial in Belgium, but the entire Western shouldn’t be content with only holding Assadi accountable. In order to end the regime’s terrorism , they should pursue the entire regime that has signed off on this and countless other terror plots over the years.

One thing seems clear: there would be a greater appetite for holding the entire regime accountable if not for the stubbornness of that narrative which describes the Iranian Resistance as marginal, cult-like, and an insubstantial challenge to the mullahs’ hold on power. These talking points come straight from Iran’s Ministry of Intelligence and Security, but they have gained a foothold in Western policy circles due to the appeasement policy. The NCRI’s “Free Iran Global Summit,” attended by thousands of political dignitaries from different political tendencies alone debunks these allegations. NCRI gatherings and their participants can testify to this fact, and they can also testify to the fact that the regime’s talking points have no basis in reality. 3

1) The #Iranian regime has been spending billions of dollars inside and outside #Iran through its lobbyists with fake news, struggling to demonize the #MEK and #NCRI. The regime’s goal is to portray that the regime has no alternative.https://t.co/8zkKZbRBlt

This has perhaps never been clearer than in the wake of the 2018 uprising and the failed reprisal against the NCRI’s rally that summer. These developments underscore both the organizational strength of the Iranian Resistance and the resulting anxiety within Iran’s theocratic leadership. The same message has been steadily reinforced over the ensuing two years, as when another uprising erupted even more quickly last November and grew to encompass an even larger number of cities and towns.

No less an authority than regime’s Supreme Leader Ali Khamenei contradicted his own regime’s propaganda about the  People’s Mojahedin Organization of Iran (PMOI/MEK) in early 2018 when he said the MEK’s “resistance units” had played a leading role in the planning and leadership of that January’s protests. Similar contradictions have proliferated ever since, as regime authorities have done their best to continue publicly denying that there is an alternative to their rule, even as they privately warn one another about the potential for the  MEK and the NCRI to lead even more intense and wide-ranging uprising in the weeks and months to come.

In April, Khamenei delivered a speech to his Basij thugs, disguised as students, in which he urged them to help prevent university demonstrations from being recognized as challenges to the entire theocratic system. He also condemned such challenges as being the purview of the MEK which “rejects the foundations” of the regime. It is a message that has been repeated in recent weeks by a number of Friday prayer leaders – municipal representatives of the supreme leader – who describe the  MEK as “the most dangerous movement” and the most prominent instigator of domestic unrest.

“Today, the enemies of our establishment have gathered all around the world and take all efforts to destroy us,” said one Iranian Member of Parliament on July 19, while the NCRI’s online summit was still taking place. But as true as this is, the global reach of the Resistance has still not brought it fully into the mainstream. That process is impeded by the lingering effects of Iranian propaganda, which allows some Western leaders to go on clinging to false narratives that depict the Iranian regime as being free from major opposition.

But the Iranian Resistance’s real impact on the society has been able to sufficiently formidable to compel Tehran into taking the most foolish risks while also contradicting the very propaganda that makes those risks manageable. Under those circumstances, it seems inevitable that false beliefs about the Iranian Resistance will eventually fall away altogether. Yet, the sooner the international community recognizes there is an alternative to Iran’s theocratic dictatorship, the sooner its threats will be defused both at home and abroad.