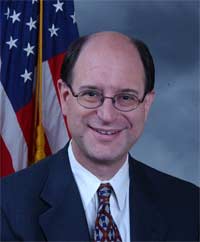 Congressman  Brad Sherman: "I want to thank everybody here for being in support of democracy in Iran. The world would be better, and of course Iran would be better if the people of Iran were able to have a government worthy of their great culture, worthy of their great history. Until then, the folks at Camp Ashraf are in a difficult circumstance and it is critically important that the United States monitor that camp, both today and after July 1st. We cannot allow a human rights catastrophe to occur in Iraq just because we are in the process of leaving." 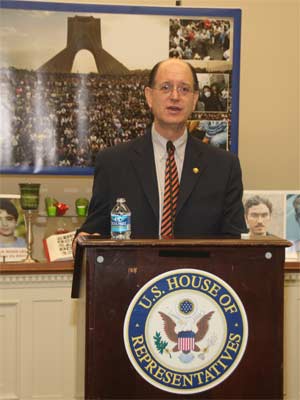 NCRI – At a Congressional briefing on Thursday, June 10, several members of the U.S. House of Representatives emphasized the need for the continued U.S. protection of Camp Ashraf in Iraq. The bi-partisan call was made in light of the announcement by the United States military that the U.S. intends to evacuate Camp Grizzly in Ashraf and turn it over to the Iraqi Security Forces by July 1st. Many members at the briefing, which coincided with the anniversary of the uprising in Iran, also called for the removal of Iran's main opposition, the People's Mojahedin Organization of Iran (PMOI/MEK), from the State Department's list of Foreign Terrorist Organizations (FTO). The following is the text of speech by Congressman  Brad Sherman (D-CA), Chairman of the U.S. House Subcommittee on Terrorism, Nonproliferation and Trade.

First, I want to thank everybody here for being in support of democracy in Iran. The world would be better, and of course Iran would be better if the people of Iran were able to have a government worthy of their great culture, worthy of their great history. Until then, the folks at Camp Ashraf are in a difficult circumstance and it is critically important that the United States monitor that camp, both today and after July 1st. We cannot allow a human rights catastrophe to occur in Iraq just because we are in the process of leaving.

Second, we need to promote democracy in Iran. I was just at hearings today calling upon the State Department to provide free satellite time to the thousands of different flowers blooming on the radio and television and cable airways; chiefly of Los Angles. The people of Iran ought to hear all of the different opinions, not just those of Radio Farda which of course does a good job. But – I wish I understood Farsi – I can tell from so many of my friends in Los Angels, there is a wide array of opinions being expressed in a vibrancy to public policy discussion in Farsi that may not be matched by the public policy discussion we have in English in this country.

And finally there is the issue of which entities should be listed on the US terrorist list. Now, it makes sense to list on that list groups that are trying to kill Americans and have killed Americans and are dedicated to destroying the United States. It is more questionable to list on that lists entities which are not enemies of the United States but are enemies of the enemies of the United States. I have been an advocate year after year for having the State Department explain what are the criteria under which the MEK has been put on that terrorist list and what criteria should the MEK be called upon to meet or demonstrate in order to be taken off that list. The State Department seems gripped by intransigence and will re-dedicate my efforts through a number of ways that we are discussing to try to get the State Department to do its job. And that job is not just putting an entity on the list and leave it there for ever but rather to do, perhaps, what was done with the IRA and that is to identify what it is that we expect an organization, dedicated to achieving certain goals, to do with regards to its tactics and approaches and then if the entity meets those to remove it from the list.

I have difficulty understanding what has the MEK done, anything remotely, in recent times, that causes the MEK to be on that list. I do know there is no entity more feared, more hated by the mullahs who run Iran than the MEK, which is perhaps the finest compliment that could be paid to that organization.

So I look forward to working with you toward a democratic Iran. I recognize that one of the tactics for us to use is sanctions against that government and we faced this issue with the people of South Africa who we loved and we cared for during the period of Apartheid. And there was a big argument in this country: were sanctions against South Africa a bad thing because inevitably they affect the economy and affect all the people that we care about or a good thing because they put pressure on the government? That debate was resolved when Nelson Mandela, then president of the Union of South Africa, thanked the United States for those sanctions and I look forward to a day when a leader of a democratic Iran thanks America for its efforts to bring democracy and freedom to Iran.

And I think our policy toward Iran would be judged, in part, by how those dedicated to democracy in Iran think we are impacting the situation. So I thank everybody for being here and I look forward to a free and democratic Iran and, in the meantime, to making sure that the United States meets its human rights responsibilities. Thank you very much.