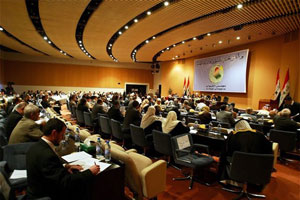 Several members Iraqi parliament have called on their government for the lifting of the medical blockade imposed on Camp Liberty, the residence of Iranian dissidents in Iraq, located near Baghdad airport.

Ms. Jamila Al-Obaidi, an Iraqi parliamentarian and member of Al-Wataniya, said: “The information provided to us regarding the conditions of the residents of Camp Liberty shows that the rights of these residents have been openly violated,” according to the February 13 issue of “Al-Mustaqbal Al-Arabi” newspaper.

“There are not only many obstructions against providing fuel, medicines and food supply for the camp residents, but there are also obstructions against ill residents having access to medical care. This has led to the deterioration of the health status of residents of Camp Liberty and the death of several of them,” she said.

According to a report on TV channel Al-Taghyeer, released on February 11, Ahmad Abdallah – MP from Iraqi Kurdistan and the rapporteur of the Security and Defense Committee in the Parliament of Iraq – issued a press release in which he condemned the unjust blockade imposed on the residents of Camp Liberty.

Talal Al-Zoubai, President of the Remediation Commission in the parliament of Iraq, asked the Iraqi government to return the assets and property back to the Camp Liberty residents.

According to the “Donia Al-Watan” newspaper, in a press conference held on February 18, Talal Al-Zoubai said: “The property of Iranian refugees who formerly resided in Camp Ashraf in Iraq has been stolen by militias who are now deployed in the camp. The militiamen have broken locks of warehouses at Camp Ashraf and have stolen goods that were in the warehouses, including many vehicles and many power generators.”