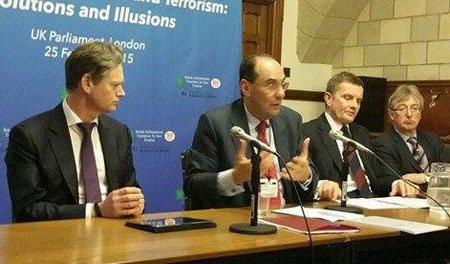 Joint Conference by BPCIF and ISJ in the House of Commons: Democratic Iran a Prerequisite for Defeating Islamic Fundamentalism

On Wednesday, February 25, cross party MPs and Iran experts discussed the roots and solutions to the new global threat Islamic fundamentalism and terrorism in a joint conference by the British Parliamentary Committee for Iran Freedom (BPCIF) and International Committee In Search of Justice (ISJ) in the House of Commons, chaired by the Rt Hon. David Jones MP, former Secretary of State For Wales.

The report is a comprehensive study of Iran’s export of Islamic fundamentalism and terrorism with the aim of offering a new different approach to counter this new global threat.

Elaborating on the root of Islamic fundamentalism, Prof. Vidal Quadras said, this phenomena “came into existence in modern times with Ayatollah Khomeini ascending to power in Iran in 1979 following the fall of the US-backed Shah dictatorship. Iran became the first country in recent history to have a theocratic government.”

Prof. Vidal Quadras further explained that the characteristics and conducts of Islamic Fundamentalism are “to implement Sharia law by resorting to force. This is the common denominator of Shiite mullahs’ rule in Iran and that of the Sunni caliphates of ISIS or al-Qaeda in other areas.”

He added, “Tehran calls for a global Islamic State both in its constitution and other texts and instructions. Khomeini, the founder of this regime, and Ali Khamenei, as the current leader, very openly considered themselves leaders of all Muslims around the world, and not just Shiites … The clerical regime is actively using export of terrorism and fundamentalism as a tool of governance and unabated in various methods by Tehran for more than three decades. This terrorist approach has grown into dimensions covering many countries and manifests itself in the crimes perpetrated by Tehran and its agents in Syria, Iraq, Lebanon, etc.”

Referring to the relations between the Iranian regime and fundamentalists such as ISIS and al-Qaeda, Prof. Vidal Quadras emphasised that “Far beyond any political and material bond between these types of groups with the Iranian regime, what is significantly important is the presence of a ruling fundamentalist State – Iran – as a role model and inspiration of the formation of all fundamentalist groups and cells. Without the existence of such a State, there would be no intellectual, ideological and political atmosphere, nor a central base to rely on for the birth and growth of these groups.”

The former Vice President of the European Parliament added that, “A real solution to this threat cannot remain limited a military-intelligence campaign, it will truly lead to no results. Also, efforts to find moderates inside the Iranian regime, attempts to convince Tehran to end its support for terrorism and provoking fundamentalism and extremism through negotiations or providing incentives have been one of the nearly permanent aspects of US policies. But theses efforts have failed and to some extend have had catastrophic consequences for the region as seen today”.

He concluded, “The West must adopt a new policy that will dry-out the roots of fanaticism and fundamentalism. This policy must include the following components: Overthrowing the Assad regime; Evicting the Iranian regime, Quds Force and its militias from Iraq; Underscoring and supporting a democratic and tolerant interpretation of Islam against both Shiite and Sunni fundamentalist interpretations; and supporting the Iranian people and their Resistance, the National Council of Resistance of Iran for change in Iran.”

The Rt Hon. David Jones MP said, “Let us not forget, the Iranian mullahs’ regime, in essence, is the fountainhead of Islamic fundamentalism in terms of ideology, policy, money, weapons and logistical support. It is true that Shiites and Sunnis have doctrinal differences; but today’s manifestations of fundamentalism, whether Shiite or Sunni, are in essence indistinguishable. To appease Tehran over its nuclear programme would ultimately be as perilous as to partner with it in the battle with IS. Now with the new nuclear revelation by the NCRI in Washington, it is clear once again that the regime in Tehran cannot be trusted. It is clear that our government must reconsider its current Iran Policy to a policy that supports the Iranian people’s democratic aspiration and the movement led by Maryam Rajavi for a democratic change in that country.”

Sir David Amess MP, Co-chair of the BPCIF, stressed on a change of policy and said “Mr Prime Minister, the moderate Muslim forces you want to reach out to are the NCRI led by Maryam Rajavi. The UK ought to support them if Islamic fundamentalism is to be defeated.”

Peter Carter QC, former Chair of the BHRC of England and Wales, spoke about a recent initiative by the BHRC president, Kirsty Brimelow QC, to write an open letter to the UN Secretary-General Ban Ki-Moon, to call for urgent measures by the UN to secure the safety and well-being of the Iranian refugee in Camp Liberty.