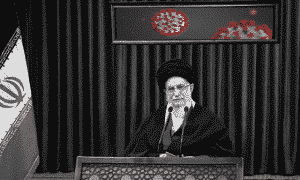 While Iran’s coronavirus fatalities quickly approach 200,000 and following weeks of deception by the regime over purchasing the Covid-19 vaccine, Supreme Leader Ali Khamenei finally publicly announced a ban on the import of credible vaccines from the United States, United Kingdom, and France.

Khamenei called this deadly virus a “test” and “divine blessing” in March.  Now, his recent remarks, which are in total defiance of the people’s righteous demand for vaccination further confirm the regime’s intention of massacring the Iranian people.

He also showed his anger over the Iranian people’s campaign on social media, using the #واکسن-بخرید or “buy vaccine” hashtag. “Today, with the proliferation of the mass media, it is possible for traitors to change the content of events and distort public opinion. This is a danger.”

As the Iranian Resistance repeatedly said, the regime embraced the coronavirus outbreak, and the deadly virus became the ruling theocracy’s ally in oppressing the restive Iranian society.

Iran’s top officials, including the mullahs’ president Hassan Rouhani, Khamenei and others, initially denied the existence of Covid-19 in Iran and later announced it had arrived in Iran in late February.

Meanwhile, documents obtained by the Iranian Resistance from Iran’s National Emergency Organization showed patients diagnosed with Covid-19 were hospitalized as early as January 2020. Later, Mohammad Reza Mahboubfar, a member of the National Covid-19 Task Force, acknowledged that the coronavirus entered Iran as early as December 2019.

Unable to deny the existence of the virus in Iran, the regime started downplaying it. The mullahs refused to issue a national quarantine and quickly reopened the economy and schools and resorted to deception and systematic lying.

The regime’s leaders continued this deception when the Covid-19 vaccine became officially available.

First, the regime and its apologists tried to blame international sanctions for not being able to procure the vaccine.

Gavi immediately rejected this claim, with one of its spokespersons confirming there was no “legal barrier” to Iran obtaining vaccines through COVAX, as the U.S. Treasury’s Office on Foreign Assets Control had issued a license covering coronavirus vaccine procurement.

On December 9, Nasser Riahi, the head of the Iranian Drug Importers’ Union, said there is no problem in transferring currency for the import of the vaccine and other pharmaceutical items to Iran.

The regime claimed it has no money to purchase vaccines. All the while it continues funding terrorism and its ballistic missiles and nuclear programs.

On December 2, Reuters revealed that the regime has spent “$600 million” for the “expansion at the Imam Hussein shrine.” This project is under the supervision of the “Holy Shrines’ Reconstruction Headquarters,” one of the IRGC front companies to export and promote terrorism. A full report on this organization was published in October 2019 and could be found here.

After failing to deceive the Iranian people and the international community by blaming sanctions as the obstacle in procuring vaccines, the regime started speaking of producing a domestic vaccine and simultaneously spoke of importing foreign vaccines.

Hemmati acknowledged the government had allocated only 200 million Euros to provide vaccines for 8.4 million people, one-tenth of Iran’s 80 million population. But they refused to say from where.

No with Khamenei’s order, it is clear the regime has no intention of purchasing the vaccine.

“Some people in this country made some efforts in producing a vaccine. The officials should pay attention to them and not reject their work. The production of the domestic Covid-19 vaccine is one of our honors. [Officials] shouldn’t reject this,” Khamenei said on Friday.

Khamenei insists on producing a domestic vaccine, while 167 pharmacists recently called the so-called domestic vaccine a “joke.” “How do we dare claim that we can produce this vaccine?” they wrote in an open letter.

Khamenei insists on producing domestic vaccine because this is another way for him to plunder the Iranian people’s wealth. This so-called domestic vaccine is being produced by the “Executive Headquarters of Imam’s Directive,” a financial institution under Khamenei’s control. Importing vaccines from credible international companies hinders the regime’s medicine mafia from receiving a considerable profit.

“The Food and Drug Administration is under heavy pressure to approve domestically produced vaccines and anti-coronavirus medicines. Because obtaining approval from the Ministry of Health means a huge profit for the drug owner,” wrote the state-run Jahan-e Sanat daily on December 14, in this regard.

Khamenei and his regime also try to take people’s lives hostage and use the vaccine as leverage to lift sanctions and blackmail the world community.

But Khamenei’s ultimate goal is to continue using the virus to oppress the Iranian society. When it comes to purchasing weapons, airbus, and missiles from Western governments and the blackmarket, Khamenei and his regime waste every penny of the Iranian people. But when it comes to people’s lives the regime refuses to spend even a dollar.

Khamenei’s order is a decree to massacre the Iranian people and use their bodies to prevent an uprising.

In this regard, Mrs. Maryam Rajavi, the opposition president-elect, said: “Having access to vaccines is an inalienable right of the sick and the people of Iran. By such criminal measures, the clerical regime will not be able to counter people’s protests and uprising.”

Having access to vaccines is an inalienable right of the sick and the people of #Iran. By such criminal measures, the clerical regime will not be able to counter people’s protests and uprising.#Coronavirus

Previous article
Iran News in Brief – January 9, 2021
Next article
Stop Treating Iran as if Its Demands Come From a Position of Strength