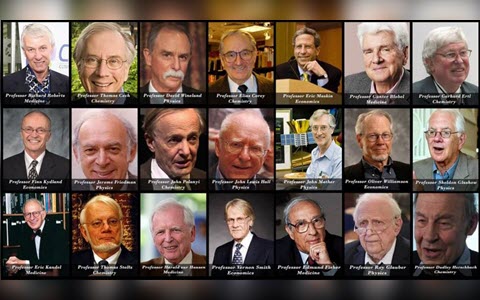 A group of Nobel laureates expressed grave concerns over continuing human rights violations in Iran. 21 Nobel laureates from the United States, Canada, Germany and Norway issued a letter asking United Nations Secretary General Antonio Guterresto to use his good offices “through the UN Human Rights Council to closely monitor the human rights situation in Iran, inform the world of the violations taking place in that country and to strongly condemn such violations … ” and “an immediate halt to intractable arrests, torture and arbitrary executions. The perpetrators of such executions must be held accountable.” Pejman Amiri an Iranian dissident and freelance writer wrote in an article in ‘NewsBlaze’ on July 22, 2017 and the article continues as follows:

The 21 Nobel laureates have praised the Secretary-General’s last report on the human rights situation in Iran, in which he referred to the 1988 massacre of more than 30,000 innocent human beings in Iran on the charge of loving freedom, said Dr. Richard J. Roberts, a Nobel laureate in medicine from the US who led the initiative. The 1988 massacre has currently become a very challenging internal matter for the brutal clerics in Iran.

The prominent laureates reiterated their previous communications with the UN about the fate of members of the Iranian opposition People’s Mojahedin Organization of Iran (PMOI/MEK) in Camps Ashraf and Liberty in Iraq who were under constant missile barrage attacks.

“In previous communications, we had expressed our utter abhorrence over the massacre of refugees in camps Ashraf and Liberty in Iraq, all of whom were opponents of the crackdown and human rights violations in Iran. We also voiced our support regarding their safe and sound transfer outside of Iraq. Fortunately, under international community supervision, these residents have now been transferred to other countries, including Albania. We are witness to your direct efforts as the UN High Commissioner for Refugees in aiding the issue of Ashraf and Liberty residents, and we express our humble gratitude,” they wrote.

From 2011 to 2016, as the top UN refugee officer, Guterres UNHCR supported a safe and secure transfer of MEK members out of Iraq. He personally intervened with former Iraqi prime minister Nouri al-Maliki to prevent attacks against the residents. al-Maliki and Iran-backed Shiite militias regularly stormed the MEK members at the behest of Tehran.

“We are seeking that you in your new position call on the Iraqi government to pay the compensation to these Ashraf and Liberty residents for their property in Iraq, valued at $600 million. During their confinement in Iraq the government did not permit them to sell their property and refused to provide compensation. This money would have allowed the residents to pay for their current accommodation in Albania, which from a humanitarian perspective is both necessary and vital,” the Nobel laureates’ letter to Guterres continues.

“In addition to our scientific obligations to advance science and improve human life, we also consider defending human rights across the globe as our duty. We believe the two endeavors of science and human rights must advance in lock-step to establish a better world. The wanton trampling of basic human rights in the 21st century is completely unacceptable,” they added, shedding light on their motivation behind this humanitarian initiative to condemn executions in Iran as it has highest number of executions per capita in the world.

Executions have continued since the May farce presidential election in Iran that the incumbent Hassan Rouhani remained in the presidency. For the past few months many people have been hanged in public. The hangings are despite the Iranian regimes’ lobbyists around the world, particularly in the U.S., portraying the Iranian government and Hassan Rouhani as moderate.

In the early days of this regime after the 1979 revolution, Rouhani had called for the public execution of dissidents during Friday prayers. His justice minister is a member of a four-man commission that supervised the execution of more than 30,000 political prisoners and prisoners of conscience back during the 1988 massacre.

Currently, the relatives of the executed victims are active in social media calling for justice to be done and bring the henchmen and those who ordered the executions to justice. The Nobel laureates letter to the United Nations Secretary General emphasizing that “The perpetrators of such executions must be held accountable” is certainly giving a new international dimension to this issue and a stronger voice to the demand for justice to be done.

Previous articleThose Who Massacred PMOI Members Should Be Rewarded, Senior Iranian Official Says
Next articleIran: Protest Rallies Staged by the Plundered Investors in State Affiliated Investment Institutions in Tehran and Other Cities