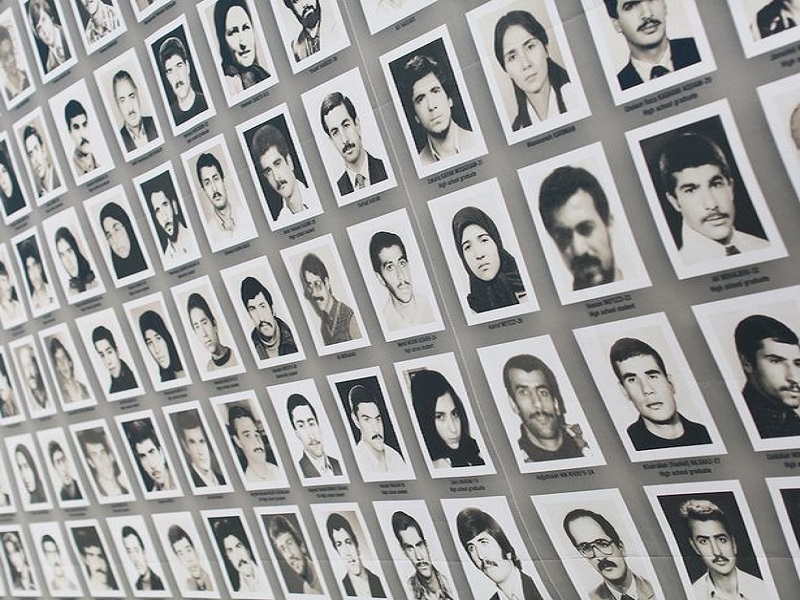 The National Council of Resistance of Iran has been making concerted efforts in recent weeks to bring attention to the legacy of human rights abuses committed or enabled by the leading candidate for the Iranian regime’s forthcoming sham presidential election.

If nothing unexpected happens to alter that outcome before June 18, a comprehensive discussion of its consequences will no doubt take place three weeks later, from July 10 to 12, at the annual gathering of Iranian expatriates and political supporters. In prior years, such events have attracted crowds of over 100,000 people, and in 2018 it also attracted the attention of a team of Iranian terrorist operatives who attempted to bomb the event and kill the NCRI’s president-elect, Mrs. Maryam Rajavi. The mastermind of that plot, Iranian diplomat Assadollah Assadi, was sentenced to 20 years imprisonment in February, following a trial that established that he and his three co-conspirators had been acting upon orders from high within the Iranian regime.

Those orders were presumably motivated in large part by Tehran’s anxiety over growing signs of effectiveness in the activism of the NCRI and particularly its main constituent group, the People’s Mojahedin Organization of Iran (PMOI/MEK). In January 2018, that effectiveness was confirmed by no less an authority than the regime’s Supreme Leader Ali Khamenei when he delivered a speech to fellow regime officials regarding the anti-government uprising that was then ongoing in well over 100 Iranian cities and towns. Although authorities had long insisted that the MEK had little support among the general public, Khamenei could not condemn the uprising’s provocative messaging without acknowledging its similarity to the talking points advanced by the MEK.

Thus, Khamenei contradicted his regime’s former propaganda about the leading opposition group by crediting it with months of planning that contributed to the social prevalence of the January 2018 uprising. The terrorist plot in June of that year represented the potential escalation of Tehran’s violent response to anti-government sentiment and popular unrest. Dozens of participants in the uprising were shot dead by security forces, and several were fatally tortured. By the plot against the NCRI rally could have killed hundreds of individuals at the target venue near Paris, including any number of the high-profile Western delegates who attended to show their support for pro-democracy activists and victims of the regime’s malign activity.

The 2018 terror plot was fortunately thwarted through the cooperation of multiple Western law enforcement bodies. But Tehran’s potential escalation was made real after the fact and reached an inflection point in November 2019, when activists led by the MEK resistance units staged another nationwide uprising, this one much more spontaneous and widespread, encompassing nearly 200 localities in a matter of only days. In that same brief span of time, roughly 1,500 peaceful demonstrators were killed in mass shootings carried out mostly by the Islamic Revolutionary Guard Corps. Several months later, Amnesty International published a report which explained that the systematic torture of persons who were arrested in during that uprising was still ongoing.

That campaign of torture helped to define the role of the Iranian judiciary under the leadership of Ebrahim Raisi, who had been appointed to the position in March 2019, apparently as a sort of consolation prize from the supreme leader following Raisi’s failed bid to unseat the regime’s incumbent President Hassan Rouhani in 2017. Raisi’s rather sudden and ill-justified promotion to judiciary chief placed him in a prime position to chase after the presidency again in 2021.

As the June 18 election began to come within sight, Raisi’s frontrunner status was upgraded via the clear endorsement of the supreme leader, making him very nearly a shoo-in for the presidency. After nearly 600 individuals registered as prospective candidates in May, the Guardian Council excluded all but Raisi and six others, none of whom were considered to be serious challenges to his campaign. Even certain other high-profile hardliners like former Parliament Speaker Ali Larijani were kicked off the ballot despite having consistently demonstrated loyalty to Khamenei and his regime which would have secured their candidacy in any other year.

What is different about this year is that the January 2018 and November 2019 uprisings rattled the regime to such an extent that leading authorities like Khamenei see it as their responsibility to accelerate crackdowns on dissent even further. According to the NCRI, Raisi’s candidacy is effectively uncontested in the current election because he has been identified as the figure most likely to promote ultra-hardline policies without regard for their human cost.

Raisi’s stint as judiciary chief was an important test of his conviction on this part, but Khamenei’s preexisting confidence in him dates back at least 33 years. In July 1988, Khamenei’s predecessor and the founder of the regime, Ruhollah Khomeini, issued a fatwa which declared the regime’s opponents, especially members of the MEK, to be enemies of God and thus subject to merciless punishment under the theocratic system. As a result, “death commissions” were assembled throughout the country with the task of interrogating political prisoners and calling for them to disavow their former affiliations. Those who refused to do so or failed to demonstrate fealty to the regime were summarily executed before being buried in secret mass graves.

Prior to this, Ebrahim Raisi was the deputy public prosecutor for Tehran, and he moved on from there to become one of five key figures in the Tehran death commission. He is therefore regarded as bearing one of the largest shares of responsibility for the massacre of 30,000 individuals over the course of several months in 1988.

This legacy, more than anything else, is what the NCRI is working to expose to a broader international audience in the last days before the June 18 election. That work will continue with equal conviction afterward if Raisi does indeed win the presidency, as seems inevitable. However, it also seems inevitable that Raisi will be compelled to declare victory only after the Iranian people have overwhelmingly rejected his candidacy and the underlying system via a boycott of the polls.

The MEK has been promoting that boycott for months, and countless unaffiliated activists and protesters have endorsed it. The effectiveness of that boycott campaign will no doubt also be presented to the international community at the July gathering. The NCRI can be expected to reiterate the sentiment expressed last month by its Foreign Affairs Committee chairman, who said in a press conference that boycott would be a precursor to nationwide uprisings that will be “far more intense and widespread than in previous years.”

In this sense, the boycott represents an opportunity for Western policymakers to assess the likely reach of a domestic movement for regime change in Iran. This, in turn, should prompt them to consider the potential effectiveness of policies that support and promote that movement instead of turning a blind eye to the human rights abuses that are sure to be committed by the incoming president and his administration