Iran: Raisi’s Speech to UN Was Full of Lies 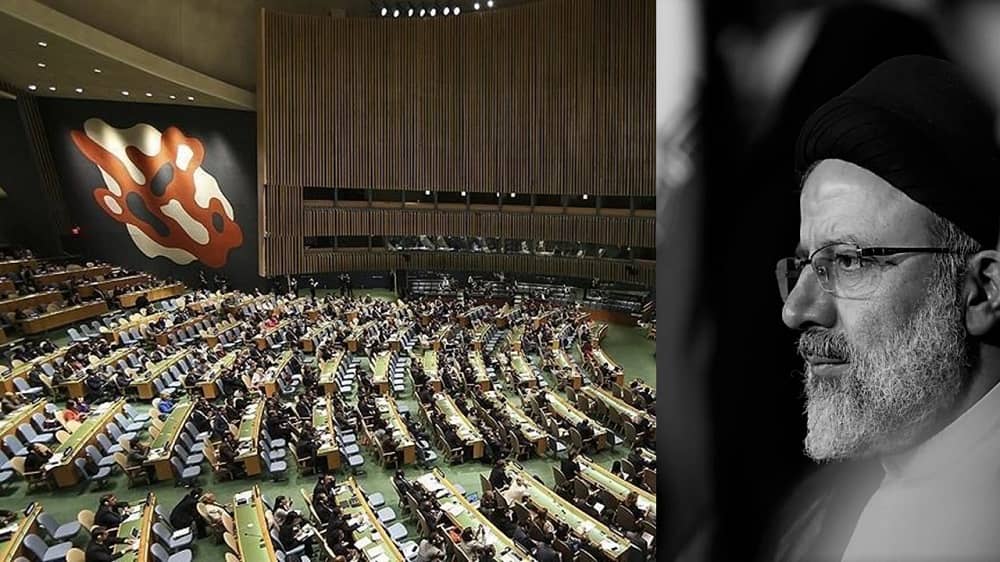 The Iranian regime’s President Ebrahim Raisi addressed the United Nations General Assembly on Tuesday, with a pre-recorded message submitted to the gathering remotely. The content of the speech came as little surprise to anybody. This speech was full of lies and threats.
Raisi presented a victimhood narrative about Iran’s Covid-19 pandemic, which has affected Iran to a much greater extent than all the other nations of the Middle East. The regime’s engineered death toll from the novel coronavirus is around 118,000.
According to the People’s Mojahedin Organization of Iran (PMOI/MEK), the real death toll is fast approaching 450,000, but the regime is covering up this figure for fear of it being linked to the regime’s own destructive policies. Raisi’s rehashed the regime’s bogus claims that Iran has been unable to obtain vaccines and other vital medical resources because of US economic sanctions, but in reality, there have always been defined exceptions to those sanctions for such humanitarian goods. Raisi, of course, declined to mention this and also avoided the topic of Supreme Leader Ali Khamenei’s outright ban on American and European-made vaccines.
“From the beginning, we had decided to import vaccines from reliable international sources, but sanctions on medicine prevented the Iranian people,” Raisi lied. In January, Khamenei announced his ban and began urging the rushed production of domestic vaccines, as well as the acquisition of vaccines from less reliable foreign sources. The distribution of foreign vaccines was also entrusted to “private” enterprises, which were linked to the Islamic Revolutionary Guard Corps, and this led to the most effective brands appearing on the black market with extortionate prices.
Iran’s overall vaccination rate is limping toward 10 percent. At a time when some nations are coping with a “pandemic of the unvaccinated” Iran is facing a pandemic of the poor and disenfranchised. Khamenei’s ban on foreign vaccines was specifically intended to slow down the pace of distribution while concentrating it among his political allies and supporters.
Khamenei referred to the pandemic as a “blessing.” Khamenei has been using the coronavirus as a hedge against looming public unrest. The threat of such unrest has been omnipresent since the end of 2017 when popular protests began morphing into a nationwide uprising that featured chants of “death to the dictator” and calls for regime change.

Over 400,000 coronavirus deaths in Iran
In November 2019, another such uprising broke out almost instantly across nearly 200 cities and towns. November also witnessed the single crackdowns on dissent since the time of the Iran-Iraq War. In his former position as the regime’s Judiciary Chief, Raisi oversaw the systematic torture of political prisoners which followed the initial shooting deaths of 1,500 of the uprising’s participants. The crackdown also compounded Raisi’s legacy as the “henchman of 1988,” due to his high-level participation in the massacre of 30,000 political prisoners that year.
This topic was highlighted both immediately before and during that speech by the Iranian Resistance and people abroad and their political supporters, who held rallies and conferences in more than a dozen cities in both Europe and North America. The evening prior to the General Assembly, former US New Jersey Senator Robert Torricelli joined other American lawmakers in urging an assertive turn in US policy toward the mullahs’ regime, as well as the investigation and prompt prosecution of its president on a charge of genocide.
“Raisi will seek trade deals, a renewal of perhaps the nuclear deal… Will we forget genocide for a trade deal, an investment, or even a treaty? Will we make treaties with a state that has killed thousands of its citizens?” Torricelli asked.
The reference to genocide was repeated by other speakers including Deborah James, a former secretary of the United States Air Force, who said, “The world community finally needs to take action” over the 1988 massacre. Secretary James urged the American authorities to put pressure on the United Nations for a comprehensive investigation of that crime against humanity, which some legal scholars have labeled genocide on account of its defined religious motivations and apparent goal of eliminating all adherents to a brand of Islam that is opposed to theocracy.
Others cast doubt on the practicality of an international investigation, especially one intended as a precursor to a UN Security Council resolution that would likely face a veto by Russia or China. “Raisi should be prosecuted, not tomorrow, not next week, not next year. We should prosecute him now,” said former US Secretary of State Mike Pompeo, expressing impatience with Western policies that have prioritized patient outreach so far.
“World leaders should band together to reject Raisi,” Secretary Pompeo said. “You should refuse to engage with him, to acknowledge him as a democratically elected leader—which he is not.”
Ebrahim Raisi, Chief Regime Henchman Vies for Iranian PresidencyMay 12, 2021
The latter remark referred to the boycott of Iran’s June 2021 sham presidential election, which resulted in historically low voter turnout, even according to the notoriously unreliable figures provided by regime authorities. This, too, was something that Raisi lied about in his speech to the General Assembly, boldly referring to himself as the “elected of the great people of Iran.” Meanwhile, around 90 percent of eligible voters had sat out the election in protest over the lead candidate’s role in the 1988 massacre and the 2019 crackdown, as well as his perspective role in future actions aimed at suppressing dissent, including actions that take advantage of the coronavirus pandemic.
“During the pandemic, the regime has used the coronavirus to continue to crack down on its own citizens, to extinguish uprisings, to subdue Iranians,” said Pompeo on Monday. “This is not acceptable.” Unfortunately, this message is somewhat undermined by the UN’s decision to grant Raisi a platform on Tuesday, over the objections of activists inside Iran and throughout the world. However, the impact of that decision could still be reversed by launching formal investigations into the 1988 massacre, the 2019 crackdown, and the regime’s deliberate mismanagement of the pandemic, so as to make it clear that there will be international consequences for the repetition of such actions in the future.

Previous articleIran: Coronavirus Takes the Lives of 437,400
Next articleIran News in Brief – September 25, 2021