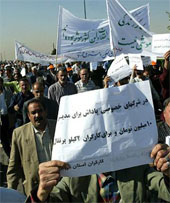 NCRI – As the state of economy deteriorating in Iran workers and the poor paid the heavy price.

Of course the true number is much higher than what has been officially announced.

More than 50,000 workers have been laid off in Iran over the past two months.