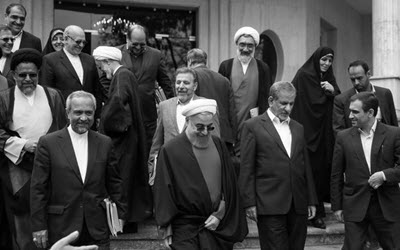 Following the claim of an11.6 percent economic growth made by Rouhani’s Central Bank, economic experts described it as unbelievable while the rival band has doubted it as an election move.

Khamenei’s Kayhan dedicated its main story to this issue, writing “once again the government broke the record, announcing an 11.6 percent economic growth on paper. The claim of economic growth and moving past recession is a repetitive, controversial story delivered by government officials to people every once in a while. According to Rouhani, we have repeatedly moved past recession! Comparing the announced figure with economic realities is contradictory and, of course, ridiculous enough to make people simply shook their heads in regret.”

Meanwhile state-run Nasim-Online news agency writes in this regard “an 11.6 percent economic growth is not credible. While 60 percent of the country’s industry is shutting down, economic growth without oil is meaningless. How is it that after 12 months, the Central Bank’s officials have all of a sudden remembered to announce last year’s negative growth?”

On the other hand, Rouhani’s government spokesman Nobakht responded to correspondents’ questions on the 11.6 percent economic growth, saying “you may ask how this growth has been achieved, but making kilos of generalized, irrelevant comments about it is not a scientific, expert approach.”

For the meantime, Rouhani’s vice president Eshaq Jahangiri confessed on Monday that “lifting sanctions was coincided with a sharp drop in oil prices last year, which has heavily affected government budget. The country is currently faced with major challenges in at least six areas, including unemployment, banking system, budget, and water resources.”

Also Rouhani’s economic advisor had said a while ago that despite increased oil exports following the lifting of sanctions, foreign exchange earnings have not increased significantly compared to last year.