Iran: 2017 Minimum Wage Less Than One Third of Poverty Line 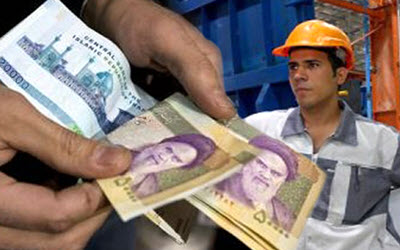 NCRI – The minimum monthly wage for Iranian workers was set and communicated by the Iranian regime’s Ministry of Labor on March 15.

The question, however, is why the minimum monthly wage this year was set in the final days of the year.

Unlike previous years in which the issue of setting the minimum monthly wage for workers was raised and discussed in state-run media, though sham, this year, however, the regime, who had made up its decision from long ago and was also concerned about workers’ opposing reactions, announced the minimum monthly wage only five days before new year, so that the workers are presented with a fait accompli and have no opportunity to protest.

The minimum monthly wage for next Persian year (2017) is set to be exactly 929 thousand 931 tomans, which is somewhat less than 930 thousand tomans. Compared to last year’s minimum wage of 812 thousand tomans, the figure shows only a 14.5 percent increase, which is nearly equal to the false, bogus inflation rate announced by Rouhani’s government, a rate even Khamenei has doubted.

A minimum monthly wage of 930 thousand tomans is set at a time when the poverty line is announced to be more than three million tomans. This means that the minimum wage is three times less than poverty line, and even less than the so-called survival line, meaning that a worker-headed family won’t be able to survive with this minimum wage.

According to article 41 of regime’s labor law, minimum wage should be set based on inflation rate and in such a way that workers’ livelihood and living standards are secured. Meanwhile, the sources within the regime say that the minimum monthly cost of living for an average worker-headed family of three and a half is two million 489 thousand tomans.

So, with the minimum monthly wage set for next year, a worker-headed family is either doomed to a gradual death or they need to find a second and even third job, like street vending, in order to make the ends meet, or they will be forced to pull their children out of school and send them to work.

A comparison between the Iranian workers’ minimum wage with those of workers around the world, particularly the neighboring countries, would clarify a lot.

When you convert the minimum monthly wage of 930 thousand tomans to US Dollar, it would be nearly 246 dollars, a figure that puts Iran at the bottom of the list compared to other countries. If we calculate the Iranian workers’ minimum hourly wage, it would be a little more than a dollar. This figure is nearly 10 dollars in western countries and more than three dollars in Turkey. Even in China, which is among the countries with the lowest minimum wage, workers are paid around 270 dollars a month, about 1.2 times more than their Iranian counterparts. Besides, it’s assuming that the Iranian workers are paid on a regular basis, which is not true. So, it would be predictable that the Iranian workers won’t accede to such cruel, one-sided decision and protest against it.