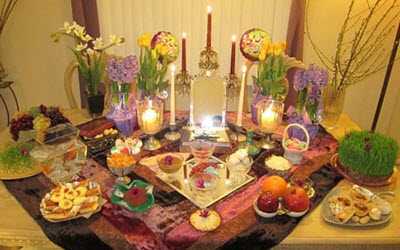 With the onset of spring and the Iranian New Year, amid the economic hardship inside, and diasporic societies everywhere around the world, Iranian citizens celebrate with the hope of a forward perspective for the good year to come, the year of the end of mullahs. Wrote Hassan Mahmoudi in an article published by the ‘American Thinker’ on March 15, 2017. It continues as follows:

Nowruz marks the first day of the Iranian calendar and coincides with the first day of the spring. People attend Nowruz celebrations, and the traditional Iranian festival of spring. This starts at the exact moment of the vernal equinox. The Spring Equinox of 2017 in northern hemisphere will be at 11:28 a.m. on Monday, March 20.

A traditional Persian New Year’s dinner includes the creation of the “Haft-Seen,” The table is set with flowers, a bowl of goldfish, a mirror, candles, painted eggs, the Holy Quran, and seven foods that start with the letter “S” or the word “seen,” in the Persian alphabet.
The seven traditional foods at ceremonial table are:

The traditional spring bulb flowers at the table, by the way, are of Iranian, and regional origin.

Yet the people face a deteriorated economy, corruption and mismanagement in the new year, one local in Tehran said: “Our economy is like a person who has all kinds of cancer but no medicine available. In Iran, the only medicine is regime change. This year at the seven traditional (foods) ceremonial table, we have different foods beginning with the letter ‘S,'” he added.

In Iran’s case, he said that meant:

Spend billions of dollars in Syria Yemen and Iraq

For Iranians, Nowruz is a celebration of renewal and rebirth, symbolized by the coming of spring, and an ancient holiday that was celebrated thousands of years ago. The word Nowruz is a compound word that blends together the Persian words “now” which means “new,” and “roz” which means “day.”

On the last Wednesday of the old year, the night of “Chahar Shanbe Suri” is celebrated in order to symbolically get rid of all the misfortunes and bad luck of the past year. People light small bonfires and jump over the flames,But this year the regime banned all kinds of flames or firecrackers.

Mrs. Maryam Rajavi, President-elect of the Iranian Resistance, in a message to a meeting at the U.S. House of Representative for human rights and democracy in Iran, said:

With the arrival of spring, Iranians are preparing to celebrate Nowruz, the Persian New Year, which marks the first day of the Iranian calendar year.

Nowruz has been celebrated for decades and symbolizes change; change from the gray, gloomy days of winter to the promising green days of spring.
For Iranians, Nowruz has a simple but significant message:

The springtime of freedom is inevitable. It may be delayed, but it cannot be stopped. For the people of Iran, Nowruz brings a new hopeful prospect:

The certain end of religious dictatorship and rule of freedom and democracy.

Our suppressed people deserve to live in a free and democratic society, which is key to peace and stability in the region. It is the only way of uprooting Islamic fundamentalism as a global threat.

Events in Iran over the past year are signs of critical developments in the coming year.

Conservative estimates show more than 3,000 executions during Hassan Rouhani’s term and yet widespread crackdown on the rise.

Yet, the Iranian people have risen up in different cities to protest the regime’s suppression…

The Revolutionary Guards Corps (IRGC), as the primary tool of domestic repression and export of terrorism in the region, should be designated as a Foreign Terrorist Organization.

A strong, bipartisan demand should be made for those responsible for the massacre of 30,000 political prisoners in 1988 in Iran to be identified and brought to justice.

I welcome the bipartisan measure demanding pressure on the Iranian regime to stop its destabilizing actions in support of terrorist groups, and it’s continued test-firing of ballistic missiles. I deeply appreciate the friendship and bipartisan support of the U.S. lawmakers for the oppressed people of my homeland and I am grateful for their strong solidarity with the PMOI members in Albania.

Previous articleIran: 2017 Minimum Wage Less Than One Third of Poverty Line
Next articleKhamenei Grants Iranian Citizenship to the Afghan Mercenaries to Expand Their Dispatch to Syria