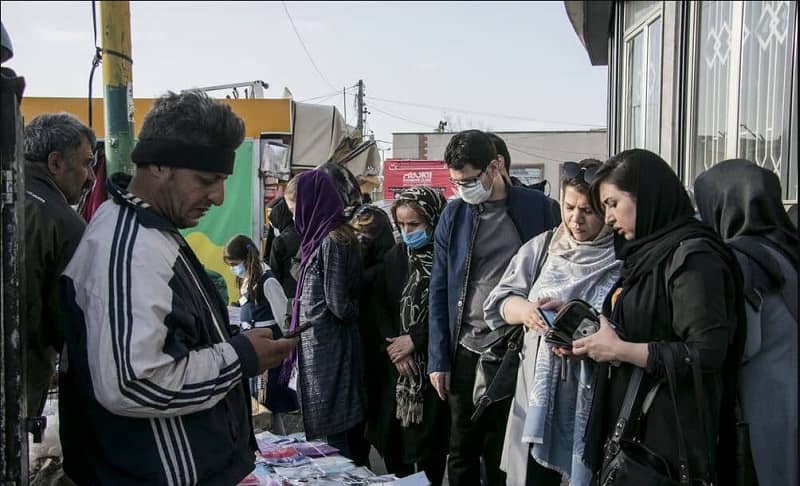 Tuesday marked the beginning of the holy month of Ramadan. Many Iranians started this month with empty tables and faced skyrocketing prices. “A glance at the report of Iran’s Statistic Center indicates rising expenses during Ramadan for Iranians,” wrote the state-run Aftab-e Yazd daily on Thursday. According to Aftab-e Yazd, Statistic Center’s reports “compares the prices of basic goods with 2019, showing a 100% increase” of people’s basic needs.

“Dates are one of the most consumed items [during Ramadan]. Its price is from 35 thousand Tomans to 90 thousand Tomans per kilogram. The approved price of simple Sangak bread is 1800 Tomans, and simple Barbari is 1500 Tomans. Also, Taftoon bread’s price is 850, and Lavash bread is sold for 300 Tomans. Of course, these prices are the lowest estimated,” Aftab-e Yazd adds.

“With a sample calculation, we understand that the skyrocketing prices of basic goods in the recent month are not in line with people’s earnings. People are facing skyrocketing prices of these products and their scarcity, which prevents them from purchasing their basic needs,” wrote the state-run Eghtesad-e Pouya on Thursday.

Based on what the regime’s apologists, officials, and western media say, sanctions are the reason for the Iranian people’s hardships. But in reality, the regime’s corrupted economic infrastructure is the real reason for these problems. “Iran’s economy is entangled by a strange paradox, which is rooted in questionable government’s economic management,” wrote the state-run Tejarat news on Thursday in this regard.

“International statistics show negative economic growth in Iran this year. On March 4, the country’s statistics center announced a negative growth of 2.1 percent in the first nine months of last year,” wrote the state-run Keyhan daily on Thursday. “The International Monetary Fund also forecasts that Iran’s economic growth will be negative 5% this solar year. So how [Nobakhts’s] claims collaborate with what people have seen in recent months?” Keyhan adds, quoting Reza Mohammadkhani, one of the regime’s economists.
The regime’s factional feuds increase amid rising economic and social crises, calling the negotiations with the western countries the only way to save the regime from collapsing.
“In these deplorable economic conditions, to be safe from the consequences of periodic, sudden protests, and the consequences of the revolt of the army of starving people, we need a heroic flexibility,” wrote the state-run Jahan-e Sanat news.

But, the real reason for Iran’s economic crisis is the regime and its wrong policies. “Blaming all problems to sanctions is going on for years. Sanctions are not the reason for all of Iran’s economic crises,” wrote the state-run Siyasat-e Rouz daily on April 7″. “According to economic and political experts, 30% of problems are due to sanctions, but 70% of problems are due to mismanagement, [wrong] decisions, and governments’ planning.” the daily added concluding, “Should we blame sanctions for skyrocketing prices and the scarcity of poultry? [the regime’s] recklessness and disabilities are not involved in this [crisis]?”

Previous articleOngoing Protests in Iran: Signs of a Social Explosion
Next articleEurope Takes Positive Step With Sanctions on Iran, but Must Now Avoid Backpedaling