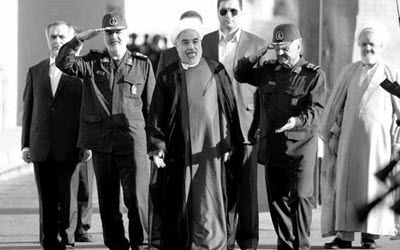 NCRi – Javad Karimi-Ghodousi, Iranian regime’s MP close to Khamenei’s faction, confessed during a clash of the rival factions that “traffickers have influence not only in customs’ administration, but in the parliament and other entities, while the president does not believe in combating smuggling and is doing too little in this regard”, according to state-run bultannews website on Friday March 24.

In his remarks, Karimi-Ghodousi called on Masoud Karbasian, head of the Customs Administration, to step down. He also accused Hassan Rouhani of doing too little regarding fighting against smuggling, saying that the President has no incentive for combating smuggling.

“The President has not said a word against smuggling of commodities, which shows he does not believe in combating smuggling at all.”, he added.

Karimi-Ghodousi also pointed to the huge influence the traffickers have in the country, saying “this influence is visible not only in customs administration, but in the parliament and other entities as well.”

“The traffickers are being largely favored and that’s why they’re acting freely”, he said without giving further details.

Pointing to regime’s next presidential election Ghodousi said that if people vote for Rouhani, the problems are not only not going to be resolved, but they will be multiplied.”

The remarks are made at a time when regime’s Minister of Economic Affairs Ali Tayebnia had said in February that ‘most of the smuggled commodities, namely more than 70 percent of them’ are being imported into the country through unofficial entry points without being monitored by the customs administration.

While speaking at the parliament, regime’s Minister of Economy said that the customs administration is only able to monitor the commodities imported through official entry points.

Among the unofficial entry points are the Revolutionary Guards’ waterfronts through which it imports smuggled goods.

While implicitly referring to Revolutionary Guards as an entity controlling most of Iran’s economy, Hassan Rouhani had said in a 2015 speech that “a corrupt entity that can import smuggled goods prevents the country from growing.”

Also regime’s former President Mahmoud Ahmadinejad had in his July 2011 speech referred to the Revolutionary Guards as ‘smuggling brothers’.

Previous article
Saudi General: Iran Is Imperiling the Stability of Our Region
Next article
Even a Paper Clip Can’t Be Sold or Shipped to Iran by a U.S. Person