Even a Paper Clip Can’t Be Sold or Shipped to Iran by a U.S. Person 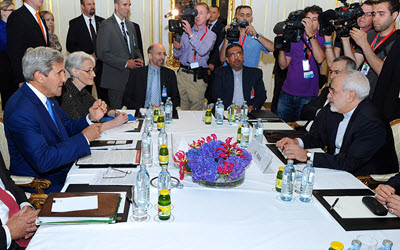 U.S. persons remain prohibited from doing business in or with Iran despite implementation of the Iranian nuclear deal, also known as the Joint Comprehensive Plan of Action (JCPOA). The JCPOA negotiations involved China, France, Russia, the United Kingdom, the United States, Germany, the European Union, and Iran. They were completed in 2015. Under the JCPOA, the United States withdrew some of its nuclear-related secondary sanctions in exchange for Iran’s compliance. However, the primary prohibitions and restrictions of the Iran sanctions program that affect U.S. persons and entities remain in place today. Wrote Doreen Edelman, in ‘The Hill’ on March 25, 2017 and the article continues as follows:

The Iran sanctions program dates from right after the Iranian Revolution and the U.S. hostage crisis. President Clinton expanded the sanctions in 1995 when he issued a comprehensive ban on U.S. trade and investment in Iran under the International Emergency Economic Powers Act (IEEPA). Since that time numerous executive orders, laws, and regulations have come into effect that have strengthened economic and trade sanctions on Iran.

Recent reports give the impression that most sanctions against Iran are related to the JCPOA. Actually, the JCPOA only removed or modified existing U.S. law regarding secondary sanctions. Secondary sanctions target non-U.S. persons for wholly non-U.S. conduct that occurs entirely outside of U.S. jurisdiction. Primary sanctions, on the other hand, reach only persons subject to the jurisdiction of the United States.

Current primary sanctions prohibit both direct and indirect transactions, purchases, sales, or services to or with Iran without a license or an applicable exception. This means that U.S. entities cannot export to, import from, provide services to, or support or facilitate any transactions with or in Iran. Even a paper clip can’t be sold or shipped to Iran by a U.S. person. U.S. banks are prohibited from processing Iranian transactions, cutting off Iran from direct access to the dollar. Unlike several other sanctions programs, these primary sanctions also apply to foreign subsidiaries of U.S. companies, although there is a very restrictive general license under which they now may operate.

The Treasury Department’s Office of Foreign Assets Control (OFAC) has a few other general licenses which allow U.S. persons to do some limited business with Iran, for example, for legal work and transferring inheritance assets. There is one general license for agricultural products, medical products, and devices. General licenses also exist for some commercial passenger aircraft and related parts and services, and for importation of Iranian-origin carpets and foodstuffs. All general licenses are very narrowly tailored, subject to several conditions, and require documentation.

Additionally, the president and OFAC have authority to designate foreign persons and companies to any one of the designated persons lists described above. For instance, the day after sanctions relief pursuant to the JCPOA was implemented, OFAC listed eleven individuals and entities. If an Iranian person or entity is on one of the numerous government lists, then U.S. persons, and, depending on the program, foreign persons, are not allowed to do business with such persons or entities nor, arguably, with any person who does business with such persons or entities.

Moreover, designation can occur under sanctions programs that do not directly target Iran, but which often affect Iranian entities and individuals, such as programs that target proliferators of weapons of mass destruction, supporters of terrorism, and human rights abusers. Again, these programs remain in place even after the JCPOA.

Demonstrating his authority and willingness to act under these programs, President Trump responded to Iran’s testing of medium-range ballistic missiles on Jan. 29 and Feb. 3 by designating 25 entities and individuals under the weapons of mass destruction and terrorism sanctions. These individuals, who appeared to be affiliated with the Islamic Revolutionary Guards Corps (IRGC) included a number of non-Iranian actors, and some in China, Lebanon, and the United Arab Emirates.

Additionally, OFAC has made it clear that it will continue to rigorously enforce existing sanctions. As a demonstration of just how tough the United States will continue to be against Iran, OFAC recently announced its largest settlement ever against a non-financial institution. The Chinese corporate organization collectively known as ZTE, settled with OFAC on March 7 for nearly $1.2 billion.

Doreen Edelman is a trade attorney and co-leader of the global business team at Baker Donelson. She has more than 25 years of experience advising companies on import and export compliance, foreign investment and global expansion.