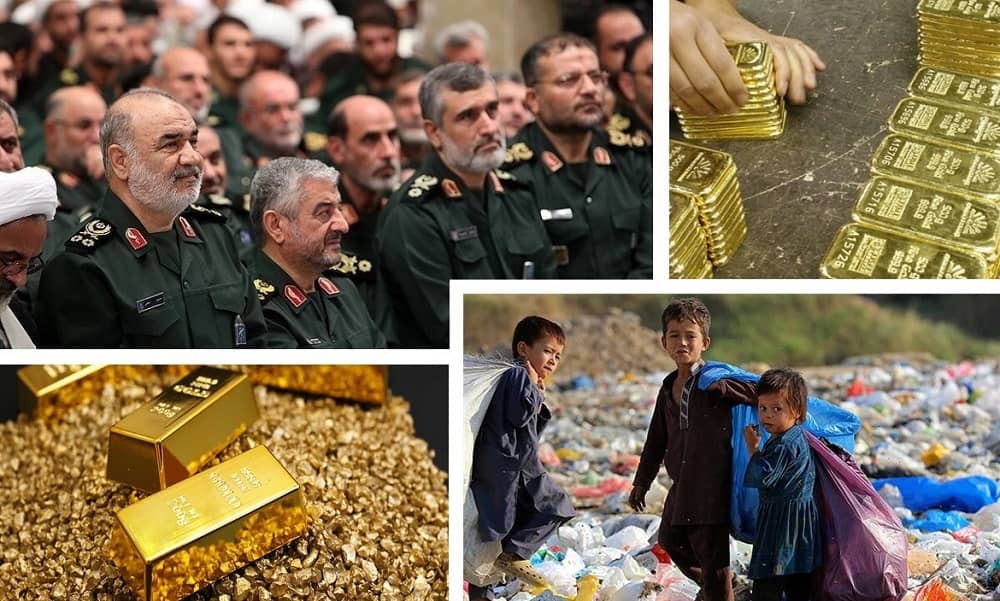 Iran is going through its worst economic period under the mullahs’ regime. While there are many speculations as to why this economic crisis is deepening daily, the regime’s corruption is considered the main creator of this situation. The state-controlled mafia controls the country’s imports and exports. One of these mafias is the gold mafia.
“If we do not follow the mafia, they devastate us,” the state-run Jahan-e Sanat wrote on September 11, quoting Iran’s gold sellers.
“Jewelry activists say anyone who works in the field is aware of the presence of an invisible mafia network, but few can expose it because if they do, they should quit the business,” Jahan-e Sanat adds.
“The Chairman of the Cooperative Board of the Jewelry Guild stated: ‘Unfortunately, the well-known groups have formed triangles in the Jewelry Guild that are in harmony with each other, and if an activist in this field does not coordinate with them or does not act according to their system, they hinder their work,” Jahan-e Sanat states.
According to Jahan-e Sanat, “For every 10 tons of gold that enters the country, 15 tons are exported, while the benefits and wages of making gold should go to Iranian manufacturers, but in this area, the country’s wealth is lost.”  “Dubai has the most profitable market for jewelry and gold in the world and is known as the ‘city of gold.’ The gold trade is the most profitable export in Dubai after oil. Meanwhile, Iran, which has significant reserves of gold, and the gold industry is a long-standing art among its people, has now become an importer of gold from other countries,” Jahan-e Sanat writes.
Iran was one of the world’s largest gold exporters. The organized mafia, connected to the Revolutionary Guards (IRGC), has practically stopped gold export and is importing gold on a large scale. But why?
“The huge profit of [gold] imports have led to smuggling and embezzlement. This has led to the closure of about two thousand jewelry factories in the country. The wealth and power that is in the hands of the [gold and jewelry] mafia has paved many obstacles for [corruption] and even prevented the gold sellers from speaking out,” Jahan-e Sanat wrote in this regard.

Due to the regime’s institutionalized corruption, Iran’s economy is on freefall. The country’s GDP is very low. To compensate for its budget deficit, the regime started rampant banknote printing, and since it is much more than the production rate, it has caused inflation.
Plus, due to the regime’s malign activities that have resulted in comprehensive sanctions, Iran’s currency has the lowest value globally. Inflation and declining Rial’s value have meant rising gold prices. Investors buy large quantities of gold when the country is experiencing high levels of inflation.
So, the IRGC and other regime institutions which need money to pursue their evil deeds have been importing large quantities of gold.
“The value of a country’s currency is strongly related to the value of its imports and exports. When a country imports more than it exports, the value of its currency will decline. So, exporting gold has a positive impact on Iran’s currency value. But the regime declines to export gold, and instead, it largely imports them.
A country’s demand for gold to meet the needs of government, consumers, investors, and industry can only be determined by offsetting gold imports by exporting gold.
How IRGC-linked Gold Mafi Affects People’s Lives?
“The silent embezzlement of gold results in the unemployment of thousands of workers and their families. In the last one or two years, 1,800 workshops in this field have been closed, and no one has been held accountable,” Jahan-e Sanat wrote.
“Improper import of gold has caused many activists and producers in Iran to change their use, and as a result, many workers became unemployed. At the same time, no one monitors the gold market, which has led to the closure of domestic gold workshops and the intensification of mafias’ activities,” Jahan-e Sanat adds.
Conclusion
Like other Iran’s national resources, the gold and the jewelry industry are dominated by the IRGC. Iranians suffer from economic pressures, while the regime has the means to support them or boost Iran’s economy. Yet, the regime’s priority has been pursuing its malign activities. The state-controlled mafia is controlling people’s lives. As long as the regime stays in power, these mafias continue devouring Iran’s national wealth and ruing Iranians’ lives.

Previous articleIran: Whether International or Unilateral, Ebrahim Raisi Must Face Prosecution for Genocide
Next articleThe Staggering Number of Corona Victims Is More Than 421,600