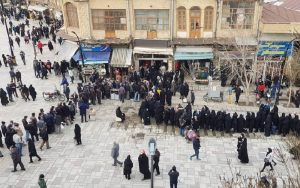 Iranian people are struggling in the swamp of poverty and can hardly make their ends meet. Despite efforts by mullahs’ apologists to frame sanctions as the reason for Iran’s economic problems, state-run media underline the real reason, which is regime officials’ mismanagement.

Footages from Iran show long lines of people standing to receive poultry. The Iranian people should face both scarcities of their basic needs and their skyrocketing prices. Yet, government officials try to demonstrate they have the situation under control and bogusly claim they are moving forward despite “sanctions.”

“Despite these problems, Minister of Agriculture Jihad recently announced we had performed well in terms of production of chicken and eggs! However, the officials of this ministry, including the Deputy Minister of Livestock Affairs, are unwilling to answer the media in this regard. Only the Livestock Affairs Support Company promises to improve the situation soon,” Tasnim article adds.

“If the government’s officials go to the market, as ordinary people do, they would see that most shops either do not have poultry or selling it at high prices. The poultry [which is supposed to be sold at] 20,400 tomans is being sold at 40,000 tomans. There are long queues in front of markets and shops that distribute poultry at the [adopted] price. While 1,000 tons of fresh chicken and 1,000 tons of frozen chicken were to be distributed daily to meet the needs of Tehran province’s 1,700-ton need, Rahmati, the Chamber of Trade inspector Unions, said that a total of 90 tons of poultry has arrived for Tehran. This should be distributed in Tehran and other cities of the province,” Tasnim wrote.

Thus, Tasnim underlines that people have to “purchase poultry at high prices and face its shortage.”

In addition to poultry, Iranians are also unable to purchase fruit and other basic needs. In other words, Iranians welcomed the Persian New Year (Nowruz) on Sunday with empty tables.

“There was a 20 to 30 percent drop in demand for fruit in the market on New Year’s Eve. Due to the decrease in people’s purchasing power and the increase in fruit prices, the demand for the fruit has decreased compared to the previous year,” wrote the state-run Young Journalist Club (YJC) on Thursday, quoting Mustafa Darainejad, President of the Fruit and Vegetable Central Market.

“As we enter Nowruz 1400, not only is there no point of hope, but the expected inflation torments us. In all these years, people have always struggled with difficulties, and the [regime] has only praised them for resisting. Officials now face this question, that when would people have their share of peace and comfort? How long do people have to walk through hundreds of shops to buy oil? Really, how long do people have to stand in long queues for hours so that maybe it will be their turn to get poultry, not at a reasonable price, but at a price several times higher than the price they bought a month ago? How long is the people’s share of [the so-called] resistance supposed to be skyrocketing prices and empty tables? How long should salaries be below the poverty line?” wrote the state-run Tejarat daily on Thursday about the regime’s inaction and people’s crisis.

While people are grappling with poverty, the regime’s Supreme Leader, Ali Khamenei, bogusly claimed Iran under the mullahs’ regime is the world’s 18th economy. “Iran’s economy ranks 18th among the world’s top economies; That is, we are the 18th largest economy in the world,” he said during his yearly address on Sunday.

Khamenei indirectly acknowledged that his regime has the financial ability to help people. The ongoing production of missiles, drones, and other weapons is a testament to the fact that mullahs’ are willing to keep Iranian society busy with economic crisis to avoid another uprising.

“The [Persian] year of 1399 is the year of growth of Iran’s defense industry… This industry has been able to neutralize the sanctions in the true sense of the word,” wrote the officials IRNA news agency.

But, as the regime continues its antipatriotic plans and tries to keep people busy grappling with the economic crisis, officials and state-run media warn of another uprising by the army of starving people.

Previous articleOfficials Express Fear of Social Media and Its Effects on Iran’s Restive Society
Next articleIran’s Lobbies and Their Influence Campaign in U.S. and Europe