Iran’s Regime Embezzles $23 Billion Under the Pretext of “Privatization” 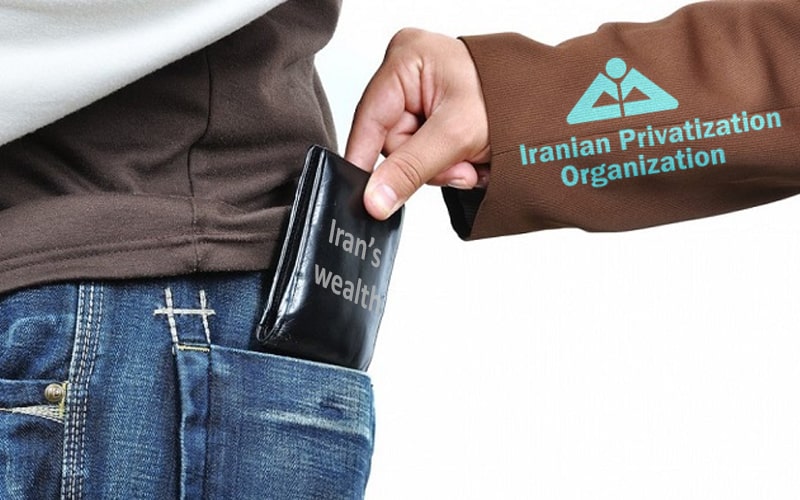 Iranian people are suffering from economic crises. Meanwhile, the Iranian regime and its affiliates continue hoarding Iran’s national wealth. One of the plans the regime has used to plunder people is using the so-called private sector.

In an article titled “astronomical numbers, but little information,” the state-run Sharq daily acknowledged one of the regime’s embezzlements through the so-called private companies.

“A memorandum of understanding worth 300 trillion tomans was signed between the Ministry of Mining Industry and Trade and five large companies: Copper, Golgohar, Goharzamin, Zar Macaroni, Iran Radiator. Another memorandum of understanding worth 152 quadrillion tomans was signed in March. This agreement was within the framework of the ‘resistance economy; and a continuation of the previous memorandum, which was also signed with five other companies: Chador Mello, Arak Machinery, Al-Mahdi Aluminum, Sepahan Oil, Shirin Asal,” Sharq acknowledged.

Thus, according to Sharq, the regime has plundered “a total of 450 quadrillion tomans or $23 billion of investment memorandum in about two to three months. Meanwhile, the total development budget of the country this year is about 120 quadrillion tomans. Also, this figure is almost more than one-third of the  country’s current budget .”

Sharq then acknowledges that due to the “negative investment growth in the country, such large investments, due to the lack of changes in the components necessary to attract capital, is surprising.”

Sharq’s article then asks: Are these memorandums related to the “public-private partnership” bill that is currently waiting for the parliament’s approval.”

The public-private partnership bill is a plan that Hassan Rouhani’s government has introduced, and the regime’s parliament is silently adopting it. The National Council of Resistance of Iran (NCRI) had previously highlighted some shocking details about this plan based on the facts acknowledged by the regime’s state-run media.

The state-run Mashreq News on November 1 acknowledged that “According to officials’ statistics and statements, there are more than 86 thousand semi-finished construction projects in the country, for the completion of which 1000 quadrillion Tomans of credit was estimated. The government budget alone is not enough to complete these projects, and it will take years for these projects to be implemented with the government budget.”

While many believe that Iran’s private sector benefits from this plan, facts and figures show that there is no such thing as “private sector” in Iran under the mullahs’ regime. The “private sector” is another alias of the regime’s Revolutionary Guards (IRGC).

The IRGC and the regime’s Supreme Leader Ali Khamenei and their powerhouses control Iran’s “private sector.”  Khamenei and IRGC are sole beneficiraies of the privatization plan.

Mashreq News article underlines that “The [plans] is a sensitive, complex, and corrupting one, where it becomes clear that the beneficiaries, by carefully designing the decision to choose the marketable plan, pricing, buyer selection, cash conditions, and installments, are left to six people. The selection of these people is also a sign of corruption. The investigation shows that two employees of the Program and Budget Organization, who are relatives of some members of parliament, act as policymakers. They have designed the puzzles and sides of the public-private partnership bill to achieve their interests and goals. That is, they should also benefit from legislation in the position of beneficiaries (private sector).”

On July 31, 2017, the state-run Sharq daily acknowledged some astonishing details about the so-called private sector. “The proclamation of the policies of Article 44 was to leave the economy to the people and the government to give up the economy, but what did we do? Part of the economy was in the hands of a government without guns, which we handed over to a government with guns [IRGC]; this is not privatization. A government that has guns and media and everything and no one dares to compete with them,” Sharq’s article reads.

Iranian workers’ salary is 3.5 million tomans or $150 with the current exchange rate at the free market. Yet, due to the regime’s corruption and illicit activities such as privatization, people face skyrocketing prices and inflation.

“Today, the salaries of workers and retirees are three million tomans away from the livelihood basket. Meanwhile, according to Article 41 of the Labor Law, salaries must be adjusted based on the inflation rate and the living costs,” Nasrullah Daryabeigi, Executive Secretary of Mazandaran Workers’ House, told the semi-official ILNA News Agency on Wednesday.

“Today, about 99% of workers do not have job security. One of the most important reasons for dismissal in society is the prevalence of temporary employment contracts and the expansion of contractors, which are the cause of labor exploitation in the country. In Iran, privatization has led to poverty, slavery, the dismissal of workers, social anomalies, and the specialization of social justice,” Daryabeigi acknowledged.

The ongoing economic crises in Iran and its role in deepening them have turned society into a powder keg.

said that “With increasing concern, I feel the danger of rising the army of starving people.” He expressed fear that the regime, which he called the “revolution,” will be lost.

While referring to the regime’s upcoming sham presidential elections, Ahmadinejad said: “The economic situation is catastrophic. The social situation is on the verge of collapse, and cultural conditions are indescribable in terms of disintegration. Today, if we face a low voter turnout, which certainly happens in the current situation, it will have far-reaching domestic and international consequences. We will fall and can no longer rise again.”

Previous article
Iran: Nationwide Protests By Oil Workers And Employees In Oil Centers In 9 Cities
Next article
Iran: Coronavirus Takes The Lives Of 299,500 In 543 Cities