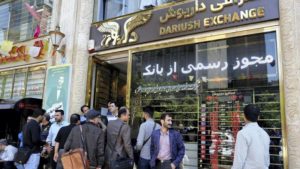 The Iranian regime has been using different tactics to plunder Iranians and devastate Iran’s economy. The regime’s so-called different “economic plans” are mullahs’ methods to plunder people. One of these plans is the “Public-Private Partnership Bill.”

Based on this plan, Rouhani’s government will give large unfinished construction projects to the so-called “private sector” to finish.

“According to officials’ statistics and statements, there are more than 86 thousand semi-finished construction projects in the country, for the completion of which 1000 thousand billion Tomans of credit was estimated. The government budget alone is not enough to complete these projects, and it will take years for these projects to be implemented with the government budget,” wrote the state-run Mashreq News on November 1, 2020.

In other words, the so-called private companies are either Khamenei and IRGC front companies or have no chance to win bids in auctions.

“The [plans] is a sensitive, complex, and corrupting one, where it becomes clear that the beneficiaries, by carefully designing the decision to choose the marketable plan, pricing, buyer selection, cash conditions, and installments, are left to six people. The selection of these people is also a sign of corruption. The investigation shows that two employees of the Program and Budget Organization, who are relatives of some members of parliament, act as policymakers. They have designed the puzzles and sides of the public-private partnership bill to achieve their interests and goals. That is, they should also benefit from legislation in the position of beneficiaries (private sector),” Mashreq News article adds.

Khamenei officially started the privatization program in 2005. A year later, he tasked the government with transferring 80% of the public assets to the private sector. Khamenei has legalized this action by using Article 44 of the regime’s Constitution, which divides the Iranian economy into three sectors: Private, Governmental, and Cooperative. But who benefits from this plan? Small business owners or the IRGC?

“The proclamation of the policies of Article 44 was to leave the economy to the people and the government to give up the economy, but what did we do? Part of the economy was in the hands of a government without guns, which we handed over to a government with guns [IRGC]; this is not privatization. A government that has guns and media and everything and no one dares to compete with them,” wrote the state-run Sharq daily on July 31, 2017, in this regard. The IRGC also uses these private sectors to circumvent sanctions.

Khamenei’s privatization plan has destroyed Iran’s industries. As a result of this process, many workers lost their jobs, and the so-called private owners have been delaying paying the workers’ wages. Thus, there have numerous protests and strikes by deprived workers of HEPCO, Haft Tappeh Sugarcane Factory, and other well-founded and once flourishing factories.

More on Public-Private Partnership Bill and how it allows corruption

The Public-Private Partnership Bill is a legal clearance for mullahs’ to carry on their embezzlements.

“Under the pretext of half-finished development projects, under the name of the Public-Private Partnership Bill, the most corrupt part of governance, government transactions, is being moved to darker chambers of [the regime],” wrote the semi-official ILNA news agency, quoting Farshad Momeni, one of the regime’s economists, on Wednesday, March 31, 2021.

“Public transactions, which have an annual value of nearly two quadrillion tomans in the country, according to the statistics of the Organization for Economic Cooperation and Development (OECD), have the highest volume of bribes exchanged among the eight branches of government. [The public transactions] alone exceeds the other seven branches and is equivalent to 57 % Of all bribes in governments,” Momeni adds.

Momeni adds that “For about six years now, various tricks have been used to cover up the economic catastrophe of ‘writing the rules of public transactions in the chambers of bureaus’ which will undoubtedly have political and social consequences as well.”

Two quadrillion million tomans, lost in the regime’s black hole of corruption, are equal to $77 billion, with the free-market exchange rate as of April 1, 2021. Meanwhile, Iranian workers’ salary is 3.5 million tomans or $135. In addition, this high amount of corruption shows the regime has sufficient economic resources to help impoverished Iranians. Contrary to what the mullahs’ apologists try to sell, sanctions are not the main reason for Iran’s economic crisis.

On March 27, Azar Mansouri, a member of the Advisory Board of former regime president Mohammad Khatami, told ISNA news agency that the regime’s “Systematic corruption is a serious obstacle to increasing national capital.”

The IRGC uses its financial empire to fund terrorism, construct ballistic missiles while Iranians are grappling with poverty.

The Public-Private Partnership Bill is another of the regime’s plans to plunder Iranians and destroy Iran’s economy. This bill is only the tip of the iceberg of the regime’s institutionalized corruption. The aforementioned facts underline that doing business with the regime, or the so-called “private sector,” will only help the regime fund its warmongering machine, or the money will be lost the regime’s black hole of corruption.