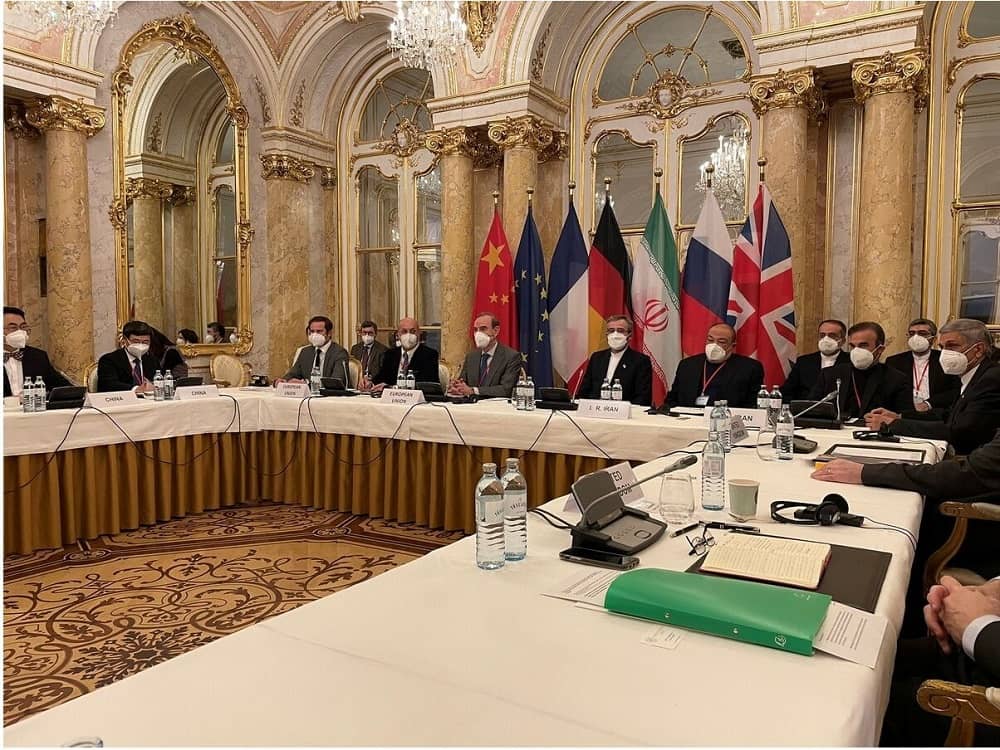 With negotiations over possible re-implementation of the 2015 Iran nuclear deal still at an impasse, Iran’s ruling theocracy has recently made some of its most provocative moves to date. Following a formal censure from the International Atomic Energy Agency’s Board of Governors, the regime began dismantling surveillance cameras at a number of nuclear sites, then started rapid enrichment of uranium using a new array of advanced centrifuges in the fortified nuclear facility at Fordo. On Sunday, the regime’s former Foreign Minister Kamal Kharrazi, cherished by Western powers as a “reformist,” compounded the regime’s nuclear extortion by declaring outright that “it’s no secret that we have the technical means to produce a nuclear bomb.”

Meanwhile, disputes continue to develop between the regime and its alternative. Last week saw a Stockholm court pass a sentence on a former Iranian prison official whom it had charged with committing mass murder in his home country. Swedish authorities invoked the principle of universal jurisdiction to hold Hamid Noury accountable for a crime against humanity during the 1988 massacre of 30,000 political prisoners, which Tehran would only continue to ignore. He is now expected to spend the rest of his life in prison.

On June 30, it was revealed that Belgian authorities, apparently with the help of one or more other European governments, had secretly negotiated a treaty with the Iranian regime that could lead to the release from custody of a notorious Iranian terrorist. Assadollah Assadi was sentenced to 20 years in prison early last year after a trial confirmed that he had been the mastermind of a failed plot to set off explosives at the annual gathering of the Iranian Resistance near Paris in 2018. Two of Assadi’s co-conspirators were arrested while attempting to cross the border from Belgium to France, carrying 500 grams of high explosives Assadi himself had smuggled into Europe.

He was able to do this because at the time the plot was unfolding, Assadi was serving as a diplomat at the Iranian regime’s embassy in Vienna, and thus was able to circumvent normal security screenings when boarding commercial flights. His abuse of that privileged indicates a sense of impunity shared between him and the regime as a whole, leading Tehran to repeatedly insist that the case against him was unlawful, regardless of the seriousness of his crimes or where they took place. Iran’s foreign minister reportedly reiterated this claim in February on the sidelines of the Munich Security Conference, less than a month before the Belgian treaty took shape.

On Sunday, Alireza Jafarzadeh, the deputy director of the National Council of Resistance of Iran’s US office, reiterated that “the Government of Belgium must not return the regime’s convicted terrorist, Asadollah Assadi, as a gift to Tehran.” He cited the latest reason for the regime’s decision to sanction 61 American renowned officials and lawmakers as symbolic punishment for their support of the People’s Mojahedin Organization of Iran.

These 61 Americans sanctioned by #Iran's regime are fighting state-sponsored terrorism by the ruling theocracy in Iran. Today’s designation should be an added reason why Belgium must not return the regime’s convicted terrorist Assadi, as a gift to Tehran. https://t.co/ozK7w1YS58

“These 61 figures sanctioned today by the Iranian regime are in fact those who are fighting state-sponsored terrorism by the ruling theocracy,” Jafarzadeh said. Many of these personalities had previously appeared at events hosted by the Iranian Resistance, including the 2018 “Free Iran Summit” which Assadi’s team sought to blow up. The regime’s decision to target those individuals with sanctions can easily be viewed as a post-facto justification for the terrorist plot and a potential endorsement for further attempts on the lives of the MEK and the Iranian opposition’s president-elect, Mrs. Maryam Rajavi.

The timing of the sanctions announcement is surely no coincidence, being less than a week removed from the Iranian Resistance’s latest Free Iran Summit. The central gatherings for that event will take place on Saturday and Sunday at Ashraf 3, the compound housing roughly 3,000 PMOI members now living in Albania. Accompanying speeches will be broadcast live to a global audience, with some of the aforementioned targets of Iranian sanctions addressing the coalition’s supporters and outlining Western policies that might be adopted to support their fight for freedom and democracy.

As with the two summits held after the start of the Covid-19 pandemic, the remote design of this year’s event leaves Iranian intelligence without a singular target akin to the 2018 gathering. In that case, an estimated 100,000 people were in attendance, meaning Assadi’s plot might have resulted in the worst terrorist attack on European soil up to that point. But despite different logistics, this year’s event is still expected to entail a large number of participants, connecting via the internet.

Tehran’s deliberately-timed public condemnation of NCRI supporters is a further sign of the event’s importance, and it should encourage the entire international community to pay attention while also giving Belgian authorities a reason not to offer Assadi as a “gift to Tehran”.

The Iranian regime’s obvious and persistent concern over such events is a reflection of their potential to foster new policies which hold that regime accountable for past crimes, and which set the stage for regime change to be brought about by the Iranian people.

Such regime change is the only means of truly solving any of the serious issues emanating from Tehran, including the regime’s escalating nuclear provocations, its domestic violations of human rights, its demands of absolute immunity for its agents abroad, and its use of hostage-taking as a means of gaining leverage for those and other demands.

This weekend’s summit gives voice to a politically and geographically diverse array of people who endorse that view and have clear recommendations for how other nations’ policies can help to facilitate regime change by the Iranian people. Furthermore, the summit can be expected to highlight the progress that the organized Resistance movement has made amidst a series of nationwide anti-regime uprisings which began in late 2017.

That domestic unrest continues to this day and is easily understood as a factor contributing to the regime’s desperate acceleration of its various malign activities. As that accelerationism persists, the international community will no doubt find itself confronted with the decision to either along the current path and hope the tide reverses, or else change policies and meet Tehran’s provocations head-on, with the understanding that the Iranian people are doing the same, and that the final outcome from their perseverance can only be regime change.