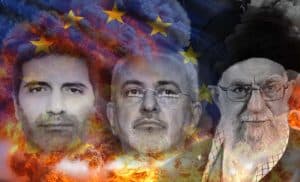 Friday marked the beginning of hearings in the case against an Iranian diplomat-terrorist and three co-conspirators who were attempting to set off explosives at a gathering of the Iranian Resistance in June 2018. The trial promises to shine a light on the entire phenomenon of the Iranian regime’s terrorism, and particularly on the issue of the regime using its embassies and diplomat personnel as tools for either carrying out that terrorism directly or providing support to the militant proxies that have proliferated in recent years.

The Belgian court is expected to hand down prison sentences for the four defendants before the end of December. The regime’s diplomat-terrorist, Assadollah Assadi, is the first of his kind to face formal charges in Europe. Yet numerous other diplomat-terrorists have been implicated in similar terrorist plots over the years. Thus, this fact should prompt the Western powers to react to the current trial by reevaluating their overall approach to Tehran’s diplomacy.

When the Western policymakers consider the outcome of the Belgian prosecution in context with the regime’s overall conduct in just the past few years, they should conclude that the most comprehensive changes are warranted. These would include the outright closure of the regime’s embassies, as well as the imposition of multilateral sanctions and travel bans on Foreign Minister Javad Zarif, among other leading officials.

This latter course of action would serve as an acknowledgment that the international community was previously mistaken in their assessment that Zarif was a comparatively moderate figure within the ruling theocracy in Iran. All the while, Zarif has praised the regime’s most brutal officials, institutions, and foreign policies. Besides, he has been engaged in implementing and then covering up the regime’s terrorism.

In 2019, shortly after the United States took the long-overdue step of giving terrorist designation to the entire Islamic Revolutionary Guard Corps, Zarif accepted the “great honor” of an invitation to the terrorist organization’s headquarters. After touring the facility and meeting with a number of high-ranking officers, Zarif affirmed his complete support of the IRGC while also reiterating early statements about his close, collaborative relationship with Qassem Soleimani, the commander of the IRGC’s foreign special operations division, the Quds Force.

At the time, Zarif claimed to be meeting with Soleimani on an approximately weekly basis. This arrangement presumably continued right up until the Quds Force commander was killed in a US drone strike, prompting an outpouring of performative grief and threats of retaliation from IRGC terrorists alongside so-called moderates like Zarif. The developments like the Assadi terror trial reveal that Zarif is in a position to play a very substantial role in the perpetration of other such acts on foreign soil.

The target venue for Assadi’s plot was located just outside of Paris, and the event that was being held there was attended by large numbers of Western nationals, including scores of high-profile dignitaries from throughout Europe and North America. Some of those dignitaries would have surely been counted as collateral damage if the plot had achieved its primary goal of killing the Iranian opposition leader Mrs. Maryam Rajavi. The explosives that were confiscated from Assadi’s agents were confirmed to be powerful enough to kill hundreds if not thousands of participants in the “Free Iran” rally, and investigations into the plot demonstrated that Assadi himself had carried those explosives into Europe while traveling on a diplomatic passport.

Such details make implicating the Foreign Ministry as a whole imperative. Even if one were to assume a glaring oversight in this case, that assumption would be immediately challenged by multiple accounts of Iranian diplomatic involvement in other thwarted terrorist plots, elsewhere on European soil.

The year 2018 was an extremely busy one for Iran’s terrorist-diplomats. Assadi is the only one of them to face formal prosecution, but this is only because he was caught red-handed providing the materials for a bomb to two of his operatives, an Iranian-Belgian sleeper cell. The surrounding examples of attempted terrorism saw diplomatic officials being involved only at the planning stages, but the evidence was strong enough in each case to justify the expulsion of one or more such officials from France, Albania, and the Netherlands.

It is frankly astonishing that these expulsions have not yet started a broader discussion regarding the risks associated with allowing Tehran to maintain its diplomatic infrastructure all across Europe. It is equally astonishing that the developments in 2018 alone were not sufficient to cast more serious doubts upon Zarif’s supposed moderate credentials. By and large, Western leaders still appear content to allow him to move freely throughout the world while playing a role that the US State Department has characterized as being more akin to that of a “propaganda minister.”

The US has taken the initiative of imposing unilateral sanctions on Zarif and restricting his movements when visiting New York for United Nations gatherings. But the nations of Europe are still lagging far behind the comparative assertiveness of US policy toward Iran. And in so doing, they are courting peril from a regime that is growing more and more desperate to project strength and to damage organized opposition both at home and abroad. Since the end of 2017, the regime has been rocked by at least three nationwide, anti-regime uprisings, and its officials continue to publicly worry that there may be more to come.

When challenged by foreign journalists and politicians over the regime’s violent crackdowns on protesters, Zarif continually touts the independence of the Iranian judiciary while insisting that he has no authority to interfere in domestic affairs. It is a position he has been taking throughout a long career stretching back to the 1980s when he served in the regime’s mission to the UN during a months-long massacre of political prisoners and thus helped to counter the growth of international awareness about the crime. But when it comes to the regime’s terrorism, Zarif and his Ministry actively help terrorists.

Zarif’s responsibilities have expanded greatly over more than three decades, but his role has remained much the same. As awareness about Iranian terrorism grows in the wake of the Belgian court case, the regime’s Foreign Minister will surely take the lead in denying, downplaying, and justifying his own diplomat’s crimes. Before December is over, the international community will have to push his protests aside in order to hold the four aspiring terrorists accountable. Zarif himself should also be held to account not just for the 2018 plot but also for his general complicity with decades of Iranian terrorism.