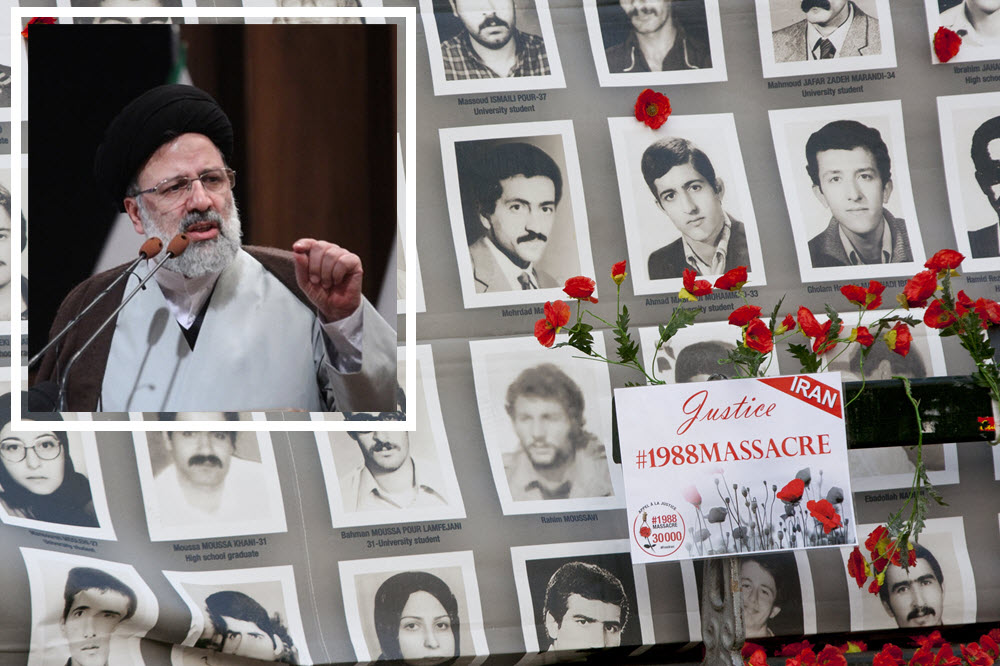 Raisi (a.k.a. Seyyed Ebrahim Rais al-Sadati) was Deputy Tehran Prosecutor and a key member of the Khomeini’s notorious “Death Commission” in the Iranian capital which oversaw the mass executions of political prisoners during the 1988 massacre.

More than 30,000 political prisoners, the vast majority affiliated to the main democratic opposition group People’s Mojahedin Organization of Iran (PMOI or MEK), were executed in the space of a few weeks in the summer of 1988 following a fatwa by the regime’s Supreme Leader Ruhollah Khomeini. That fatwa described all members and supporters of the PMOI, also known as the Mujahedin-e Khalq (MEK), as Mohareb (at war with God) and condemned to execution.

Amnesty International published a 201-page report in December 2018 titled “Iran: Blood-soaked Secrets: Why Iran's 1988 Prison Massacres are Ongoing Crimes Against Humanity” in which it detailed Raisi’s key role in ordering the mass executions in 1988.

Raisi currently heads the Qods Razavi Endowment Foundation, one of the regime’s wealthiest conglomerates. He is also President of the Governing Board of the Fifth Assembly of Experts and a member of the State Expediency Discernment Council.

Raisi was born in Mashhad in 1960. He entered the Qom seminary when he was 15. Following the 1979 revolution that ousted the Shah, Raisi became prosecutor of Karaj at the age of 20. He later became the prosecutor of Hamedan province. In 1985, at the age of 24, he moved to the capital and became the Deputy prosecutor of Tehran. In 1988, aged 27, Raisi was appointed as a member of the Tehran Death Commission sending thousands of political prisoners to their death.

In an audio tape recorded during the massacre, Ayatollah Montazeri, who was at the time Khomeini’s heir apparent, is heard telling Tehran’s Death Commission: “The greatest atrocity in the Islamic Republic, for which history will condemn us, has been committed at your hands, and in future, your names will go down in history as criminals.” Montazeri was addressing Raisi and three other members of Tehran’s Death Commission.

In 2009, Raisi threatened all anti-regime protesters affiliated to the MEK with execution on the charge of waging war on God. He argued that any assistance to the MEK warrants the death penalty because the group remains an organized movement: "With regards to the MEK, any individual who assists it in any manner or under any circumstances is considered Mohareb (at war with God) since this is an organized movement." (State television, December 30, 2009)

Raisi’s campaign in the weeks leading to the May 2017 election continuously sent out messages via the social network Telegram defending the 1988 massacre.

With Raisi standing by his side, Yasser Mousavi, the Friday prayers’ leader in Varamin (Tehran province), said at a Raisi campaign rally on May 12, 2017: “This grand figure standing next to me is proud to have executed the members of the PMOI”.

In 2017, the regime’s President Hassan Rouhani admitted that Raisi’s record includes “nothing but executions and imprisonments in the past 38 years.”

Background on the 1988 massacre:

• Alireza Avaie, a member of the Death Commission in Khuzestan, is today Hassan Rouhani’s Justice Minister.