Anniversary of 2019 Iran Protests: Regime Officials and Media Warn of Another Uprising. 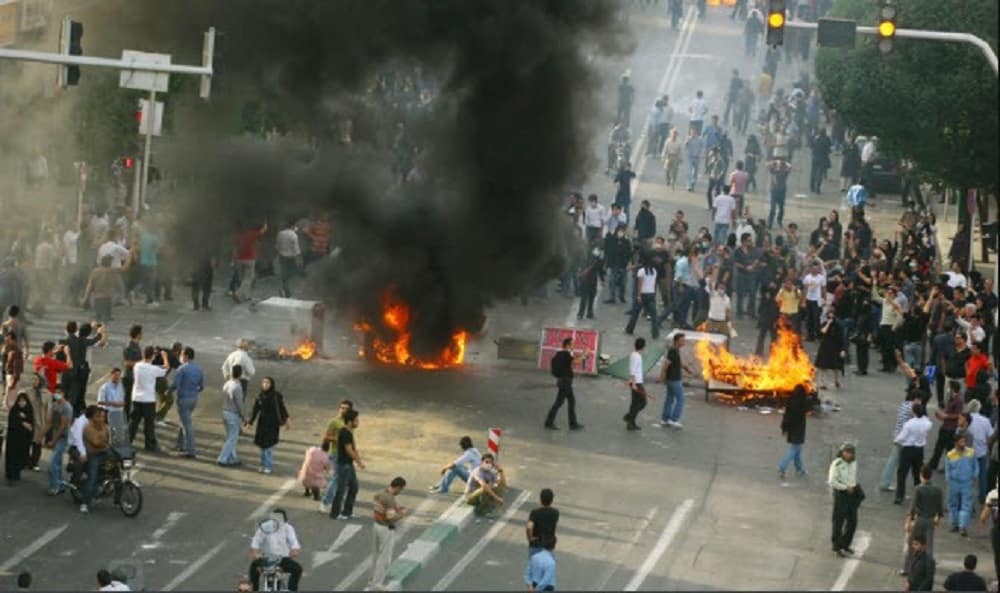 November 15 marks the anniversary of the major Iran protests in November 2019. After three years, the regime is still visibly afraid of a restive society and haunted by the bitter nightmare of those protests.

On Tuesday, a massive cyberattack disrupted the sale of gasoline. A digital traffic sign in Isfahan read “Khamenei, where is our fuel?” referring to the regime’s supreme leader and ultimate authority, Ali Khamenei.
The major Iran protests in November 2019 erupted following a sudden fuel price hike. These protests soon turned into a nationwide uprising, with people chanting slogans against the entire regime. Khamenei ordered his Revolutionary Guards (IRGC) to “do whatever it takes to end it,” as Reuters reported later.

The IRGC forces killed over 1500 protesters in a matter of days. While the regime has tried to downplay or cover this crime, Iran’s restive society has not forgotten what happened during those horrific days of November 2019.
In recent days, family members of the November 2019 martyrs published the death certificate of their loved ones indicating they were shot dead. The mother of Pejman Gholipour, an 18-year-old boy who was shot six times in 2019, published his death certificate, which shows that he was killed “by warfare outside the war.”

The major Iran protests initially started due to the increasing economic pressures on people. After three years, the country’s economic and social crises have indeed increased. Thus, Iran’s society is on the verge of explosion.
The state-run Jamaran website on May 2020 referred to “An intrinsic, natural, and civic protest that stems from the anger, criticism, and frustration of young people and adolescents in this land. The protest has its roots in the last two decades’ economic, social, political, and psychological developments.

Jamaran underlined that while “The days of November protest were limited and passed quickly, but the society and the intellectuals were shocked and shivered. For all the years since the revolution, there has been no protest of this scale, so fast, so violent, and with such a low age structure.”
On March 14, 2020, “Ara-Asra Research Center,” a think tank affiliated with Khamenei, published an analysis titled “Is Iran on the Verge of a Nationwide Rebellion?” highlighting the society is on the verge of another nationwide uprising and role of Iran’s organized Resistance.

Based on this report, “The trend over the past year shows that heavy investment has been made amid tensions between people and the government. The poor performance of the government and the executive, legislative and judicial institutions have provided the enemy [the organized Resistance] with the necessary fuel of warmongering.”

To oppress Iran’s restive society, Khamenei and his regime needed a savior. Thus, they embraced the deadly Covid-19 virus, with Khamenei calling it a “test” and “blessing.” Due to the regime’s inhumane Covid-19 policy, including a low rate of vaccination and systematic cover-up of the real dimensions of the crisis, nearly half a million Iranians have lost their lives due to the Covid-19 outbreak.

Khamenei’s strategy to use the Covid-19 to control Iran’s restive society failed when people took to the streets to resume their protests after almost a year. The nationwide boycott of the regime’s sham presidential election in June 2021 once again showed the Iranian people do not want this regime.

Now among Iran’s worsening economic and social crises, state media and officials warn about the “bitter experience” of the November protests to be repeated.
When Tuesday’s cyberattack on gas stations happened, and angry people were about to react to the rumors of another increase in fuel prices, regime officials rushed to the scene and denied any intention to increase fuel prices. The regime’s Interior Minister, Ahmad Vahidi, was the first person to deny any attempt to raise the fuel price.

“It is again November, and another fuel [crisis]. Again [we witnessed] long queues at gas stations and the possibility of bitter news. The [regime officials] were afraid of something else. They were afraid of the November 2019 incident which happened after the fuel price hike, which caused them a heavy price,” wrote the state-run Farhikhtegan daily on October 28.
“People see that, unlike other countries, they could not have a dignified and prosperous life, hardly find a job, cannot provide adequate food and treatment for their families due to the difference between the high inflation rate and low incomes, which has pushed more people under the poverty line,” wrote the state-run Sharq daily on October 25. Sharq warned the regime officials that they should expect major “protests like in January 2018 and November 2019, or the low participation in the [sham] presidential and parliamentary elections.”
“When the conditions are ripe for chaos, any minor incident could cause the greatest crises ever. The worst and most costly methods of handling disorders and crises are done after these incidents happen,” Arman daily warned on October 25.
Khamenei appointed Ebrahim Raisi, a known human rights violator, as the regime’s president to oppress Iran’s restive society and consolidate the regime. Yet, the ongoing protests across the country and Raisi’s inability to resolve economic and social crises have prompted state media to warn about another uprising.

“The government has not yet been able to increase social trust and win society back. The ruling government faces a frustrated population that is very worrying. Raisi faces major rifts between the system and people,” wrote the state-run Arman daily on October 28.
As Arman daily wrote on October 25, “In a society where inflation is rampant and is pressuring people, every incident, however small, may ignite a fire that we cannot extinguish.”
Thus, no matter what measures the regime takes, another uprising is inevitable.

Previous article
Iran News in Brief – October 30, 2021
Next article
Iran: Arrest of MEK Families, Supporters, and Former Political Prisoners on the Anniversary of the November 2019 Uprising