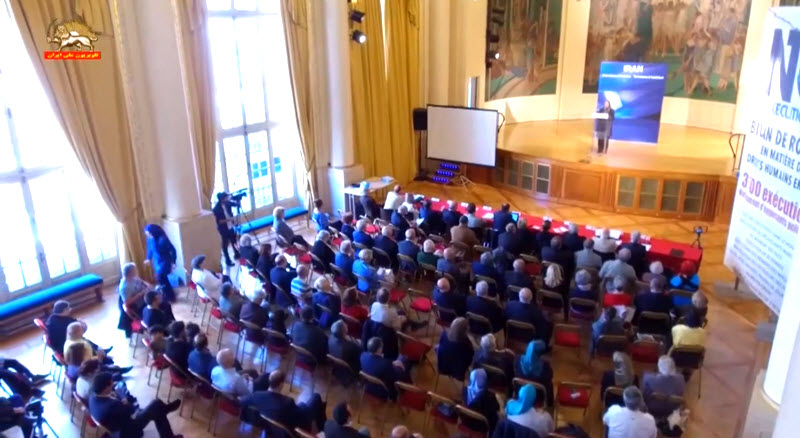 The Mayor of the 5th District in Paris hosted a conference against the death penalty in Iran, which was organized by the Committee for the Support of Human Rights in Iran (CSDHI) on Wednesday, October 10th, 2018 marking the World Day Against the Death Penalty. Speaking at the conference were mayors, politicians, and celebrities.

Regime’s Practices at “” Conference in
The Mayor of the 5th District in Paris hosted a conference against the death penalty in Iran, which was organized by the Committee for the Support of…https://t.co/uPhCKOtN66 pic.twitter.com/yjlG6gBfyl

Tribute was paid to the 30,000 victims of the 1988 massacre in Iran by Jean-François Legaret, Mayor of the 1st District, who said that “these barbarities still continue.” He also discussed the foiled bombing against an Iranian opposition rally in Paris last June. “An Iranian minister sponsored the attack on Villepinte,” he said. “The Iranian regime is desperate and is trying to execute those outside, who stand in solidarity with the resistance in Iran.” Legaret continued, “I call on the French government to launch an international investigation under the auspices of the UN to shed light on this state terrorism and the barbarities in Iran.”

The former FARC hostage and Colombian presidential candidate, Ingrid Betancourt, emphasized it is the Iranian diplomatic network who set up this terrorist plot to “eliminate once and for all, a friend who is dear to us, Mrs. Rajavi, who carries the torch of this Iranian opposition.” She praised the French government for its courage, for standing up to Iran’s pressure, and for demanding accountability. She called on EU foreign policy chief Federica Mogherini “who did not have a word to denounce the facts of the terrorist attack in Villepinte,” and asked all those who, like her, were in Villepinte, to file a civil suit case now opened in Belgium regarding this attack.
“Iran is, unfortunately, the world champion, the world record holder of executions,” said Gilbert Mitterrand, the President of the Danielle Mitterrand Foundation. He said that the 1988 massacre perpetrators, “are there, whereas the institutions exist, whereas the legal instrument exists, whereas the proofs have been established for a long time, while the procedures exist.”

Former magistrate François Colcombet said, “The regime in Iran is using the death penalty to stay in place, just like state terrorism.”

“We must fight on this subject and find international structures to crack down,” added the Jean-Pierre Béquet, former Mayor of Auvers- sur-Oise, who congratulated the Iranian Resistance for having abolished the death penalty in its plan for the Iran of tomorrow. “When we went to Tirana to see the Ashrafians who had just arrived, with many wounded and maimed as a result of the regime’s attacks. These people had no hatred or revenge,” he said.

Pierre Bercis, in reference to the June terrorist plot near Paris, said, “This fight for freedom in Iran is a long marathon ; the one who knows how to suffer two minutes more is triumphant.”

Jean-Pierre Muller, Mayor of Magny- en-Vexin said, “The People’s Mojahedin, Maryam Rajavi, they are not terrorists; they are brave men and women who fight for freedom, equality, and fraternity.” He added, “There are no moderates in Iran, only barbarians,” and proposed to declare a day of solidarity between the people of France and the PMOI/MEK.

Also in regards to the June terrorist plot near Paris, Jean-Pierre Brard, Mayor of Montreuil, emphasized “the attack not only targeted the resistance, but it also targeted our country. This embodies the hate seen in the mullahs.” Mr. Brard also rejected the moderates’ thesis in Iranian politics. “A fascist is always a fascist,” he said. He also allied with Ingrid Betancourt in the idea to launch a civil case regarding the foiled Paris plot.

Bruno Macé, Mayor of Villiers-Adam, spoke about visiting the PMOI/MEK in Albania. “I saw in Tirana people who want to set up this secular democracy that we all aspire to.”

Previous articleU.S. Threatens to Withhold Post-War Assistance to Syria Until Iran Regime Is Expelled
Next articleUS Sanctions Cause Panic Buying in Iran