Euro-MPs: Iran regime leaders must be put on trial for crimes against humanity 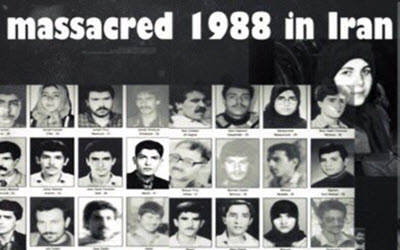 NCRI – A group of Members of the European Parliament reiterated on Thursday that officials of Iran’s fundamentalist regime ought to be prosecuted at the International Criminal Court for “crimes against humanity” over their role in the 1988 massacre of 30,000 Iranian dissidents, primarily affiliated to the main opposition group People’s Mojahedin (PMOI or MEK). The following is the text of a press release issued by the Chair of the ‘Friends of a Free Iran’ at the European Parliament:

Regime leaders must be put on trial for crimes against humanity

The publication of an audio tape of late Ayatollah Hossein-Ali Montazeri, the former heir to the founder of the “Islamic Republic”,  Ayatollah Khomeini, of his meeting with members of the so called  “death committee” 28 years ago, reveals new information about the scope of the massacre of more than 30,000 political prisoners in Iran in Summer of 1988. Most of the victims were affiliated to the main opposition PMOI.

In the audio, the members of the “death committee” admit that many of those executed had been 15 or 16 years of age at the time of their arrest.

The 40-minute audio file recorded on 15 August 1988, disclosed the talks held between Montazeri and a judicial committee composed of four of the regime’s top officials at the time: Hossein-Ali Nayeri, sharia judge, Morteza Eshraqi, public prosecutor, Ebrahim Raeesi, deputy prosecutor, and Mostafa Pour-Mohammadi, representative of the Ministry of Intelligence and Security (MOIS) who is currently the minister of justice in the so called “moderate” government of Hassan Rouhani.

During this meeting, Montazeri called the mass execution “the biggest crime in the history of the Islamic Republic”.  He expressed concern that history will remember Ayatollah Khomeini as a “bloody assassin”. “History will condemn us,” he added.

Ayatollah Montazeri was subsequently sacked by Khomeini and died in 2009.

The audio, made public on the 28th anniversary of the massacre, was removed from the family’s website after a few hours. Ahmed Montazeri, son of Ayatollah Montazeri, and head of his media bureau in Qom, said that he received a call by Iranian intelligence ministry that led him to remove the audio.

This audio confirms that the Iranian regime’s leaders who have held positions of power since the beginning of the Iranian revolution in 1979, must face justice in the International Criminal Court for one of the worst instances of crimes against humanity.

Chair of Friends of a Free Iran

Publication of Montazeri’s shocking audio recording during a meeting

In June 2016, more than 270 members of the European Parliament signed a joint statement, urging the EU member states to condition their relations with Iran to a halt to executions and a progress on human rights. http://www.gdeprez.be/270-deputes-europeens-appellent-lue-a-conditionner-la-poursuite-des-relations-avec-liran-a-un-arret-de-executions-et-a-lamelioration-des-droits-de-lhomme/