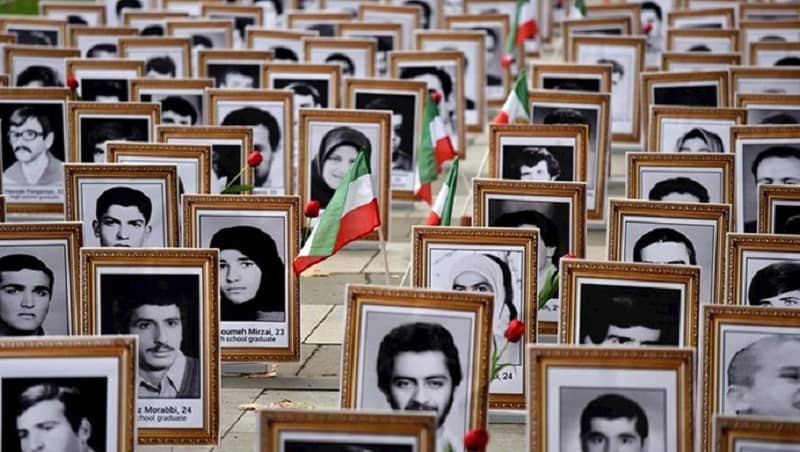 In presenting a report on human rights in Iran to the United Nations General Assembly, UN Secretary-General Antonio Guterres once again highlighted the persistent lack of accountability regarding the 1988 massacre of Iranian political prisoners, as well as contemporary issues stemming directly from it.
Tehran has never formally acknowledged the scale of the massacre, though various regime officials have openly defended the effort to annihilate Iran’s leading pro-democracy opposition group, the People’s Mojahedin Organization of Iran (PMOI/MEK). As part of a longstanding effort to muddy the waters surrounding this issue, regime authorities have repeatedly attempted to destroy evidence of secret mass graves and have systematically harassed the families of many victims, as well as criminalizing efforts to memorialize the dead or demand accountability from the massacre’s perpetrators.

Both of these phenomena were mentioned in the recent report, which named Maryam Akbari Monfared as one victim of the regime’s harassment campaign. Ms. Monfared is serving a 15-year sentence for having participated in anti-regime protests in 2009, and in 2016 she filed an official complaint with the judiciary regarding the 1988 massacre, in which she lost two siblings. Since then, she has been subjected to numerous threats and acts of abuse by prison officials, as well as being denied medical furlough, family visits, and other basic considerations.
Monfared’s story is only one of many, and her mistreatment is only one example of the strategies that regime officials use to suppress awareness of the massacre both at home and abroad. The UN human rights report also mentions the regime’s concealment of mass graves, like one in Khavaran “which is believed to contain victims of enforced disappearances and summary executions in the summer of 1988.”
The MEK, which was the prime target of the 1988 massacre, has identified similar gravesites in at least 36 cities, but neither the UN Human Rights Council nor any other international body has ever conducted an investigation to verify, much less expand upon these findings. Accordingly, Amnesty International has warned on several occasions that the regime’s efforts to pave over these gravesites and build large structures on top of them will ultimately make it very difficult to ascertain the exact scale of the massacre of the details of its proceedings.
Iran’s “death commissions” ordered and carried out 30,000 executions over a period of about three months in 1988. But some survivors of the massacre have offered higher estimates or emphasized the uncertainty that resulted from a situation in which many prison wards were emptied entirely, leaving no one alive to provide an account of what happened at those locations.

One of those survivors, Mahmoud Royaei, said in a video statement last month, “Many Iranian researchers… said at the time that the number was more than 30,000. The Deputy Intelligence Minister at the time, Reza Malek, also gave a specific number, he said 33,700.” The video was posted to the official website of the National Council of Resistance of Iran last month, alongside more than a dozen other videos by former political prisoners who also directly witnessed the events of 1988.
The following week, the NCRI hosted a virtual conference on the massacre which featured more than 1,000 former political prisoners alongside a number of European policymakers and experts in human rights and international law. The event and its speakers reiterated their appeals for international action just ahead of Guterres’ presentation to the UNGA, which once against raised the international profile of the case.
Mrs. Maryam Rajavi, the NCRI’s President-elect, said in a speech to that conference, “I again call on the US and Europe to recognize the 1988 massacre in Iran as genocide and a crime against humanity.”

Eric David of the University of Brussels and Geoffrey Robertson, a British human rights barrister also called the 1988 massacre a genocide. Both men underlined that the massacre meets the official criteria to be classified as genocide insofar as it was motivated by a desire to kill anyone whose belief in a moderate, apolitical form of Islam led them to oppose the theocratic system.
Robertson quoted directly from the massacre’s underlying fatwa in order to make this case, noting for instance that the regime’s founder and first supreme leader, Ruhollah Khomeini, accused members of the PMOI, almost all of who were Muslims themselves, of being guilty of “enmity against God,” then ordered the death commissions to “kill them with revolutionary rage and rancor, these enemies of Islam.”
“So, for religious reasons,” Eric David said, “these people were massacred for belonging to a religion; they were considered apostates. So it fits perfectly with the definition of article 2 of the 1948 Genocide Convention.”
Robertson also cited that convention in his speech, as part of an effort to spur the international community to action. He described it as obligating all nations who ratified the document to take action in order to halt ongoing acts of genocide or to hold perpetrators accountable for those that reach their attention after the fact. These remarks once again call attention to the fact that the international community was previously derelict in its duty to uphold human rights principles, having been made aware of the killings in 1988 but not following upon them.

This inaction was notably criticized last year in a letter signed by seven UN human rights experts and sent to the Iranian regime in a formal procedure. It specifically highlighted the same issues of harassment and gravesite desecration that were mentioned in the more recent report to the UNGA, and it underlined that the Iranian regime to consider adopting a new policy of transparency and cooperating with international inquiries into the massacre.
Of course, asking the regime to act about the 1988 massacre, is like asking an arsonist to put out the fire. Thus, the authors were, however, distinctly skeptical of Tehran’s willingness to hear the criticism, and they signaled that the document would be published as a call to action for the international community if Tehran provided no response, which it did not.
The letter framed a potential formal inquiry into the 1988 massacre as a way of making up for a prior “failure to act” which “had a devastating impact on the survivors and families as well as on the general situation of human rights in Iran and emboldened Iran to continue… a strategy of deflection and denial.”
As a consequence of that strategy, Tehran has had no qualms with promoting known perpetrators of the 1988 massacre to ever-higher positions within the regime, apparently confident in the fact that foreign powers and the United Nations would not take action. This assumption of impunity found its greatest outlet to date in June when Ebrahim Raisi, one of the four officials on the lead death commission in 1988, was confirmed as the regime’s next president.

Raisi’s promotion to the presidency following a previous appointment as head of the judiciary makes it clear that human rights abusers will never face accountability in Iran unless it is at the hands of an international court, a democratic nation invoking universal jurisdiction, or a new, democratic government that grows out of the mullahs’ overthrow.