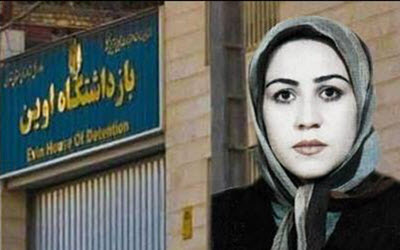 NCRI – According to reports, Iranian political prisoner Maryam Akbari Monfared, held at the women’s ward in Evin Prison, was transferred in late September to Ward 209, a ward controlled by the Iranian regime’s Ministry of Intelligence, to be interrogated. The executioners attempted to inspect her before she could enter the ward. Akbari Monfared didn’t accept to be humiliated this way and said: “I’ve not left the prison; you yourselves want to transfer me to another ward, then why should I be inspected?”

Eventually this led to a dispute between Akbari Monfared and prison officials at the end of which she didn’t allow to them to inspect her. At the beginning of her arrival, the interrogator asked Akbari Monfared what was going on in her ward. In response Akbari Monfared said: “I’m not reporting on the ward. If you have any questions about myself, you can go ahead and ask.”

To check out the status of the political prisoners, the intelligence agents first reprimand them and then, if possible, try to make them spy for the regime on fellow inmates.

The agents ask questions like “What are you going to do after your release?” and some other questions on personal matters which have nothing to do with the notorious Ministry of Intelligence.

Maryam Akbari Monfared was arrested in 2009 and sentenced to 15 years in prison. Three of her brothers and one of her sisters were executed in 1982, 1985 and 1988 for supporting the main opposition group People’s Mojahedin Organization of Iran (PMOI or MEK). Her other brother is held in Gohardasht Prison in Karaj. Her two other sisters and one other brother are members of the PMOI. In her letter to Ahmad Shaheed, the UN’s special rapporteur on the human rights situation in Iran, Maryam Akbari Monfared had written that judge Salavati had once told her: “You are carrying your sisters and brothers’ burden.”

Akbari Monfared is a mother of three. Her husband has said: “They accused Maryam of being a Mohareb (waging war on God), whereas according to their own law, Mohareb is someone who fights against the regime with weapons.”

Previous articleHow many more children have to pay the price of Iran regime’s negligence?
Next articleIran: wretched situation in Zabol Central Prison