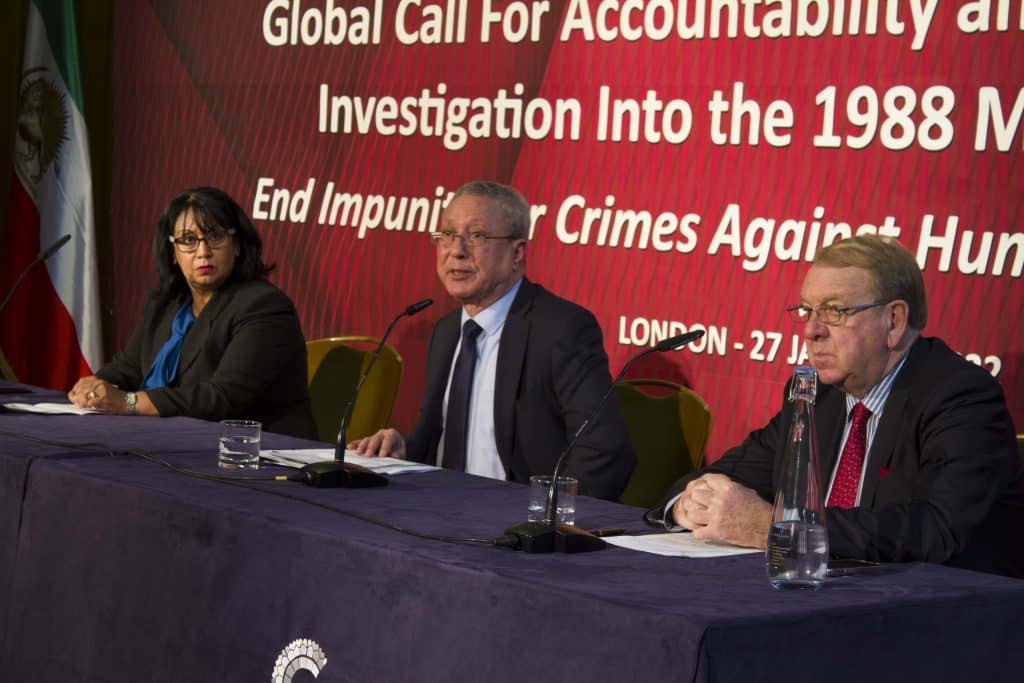 On Thursday, the U.K.-based Justice for the Victims of the 1988 Massacre in Iran (JVMI) held a press conference at the Church House in London, to reiterate its longstanding call for an international inquiry into what has been called the Iranian regime’s single worst crime against humanity. The press conference was preceded on Tuesday by the publication of an open letter addressed to the United Nations Human Rights Commission and signed by 463 prominent individuals and institutions.

Former UN Human Rights Section Chief in Iraq and JVMI President Tahar Boumedra described the letter and its underlying campaign as “the largest international call on the UN in history by the international expert and human rights community to hold Iranian officials accountable over the 1988 massacre.”

Boumedra led Thursday’s press conference alongside former UK Minister for International Development Baroness Verma and Struan Stevenson, a former Scottish member of the European Parliament and current director of the Campaign for Change in Iran. Verma used the event to comment upon the potential impact of the letter, noting that it would likely reinforce the prior finding of the UN High Commissioner for Human Rights that there are “no legal barriers to an international inquiry into the massacre.”

The letter itself urged the Human Rights Council “to urgently challenge the impunity enjoyed by Iranian officials by mandating an international investigation into the 1988 mass executions and enforced disappearances of thousands of political prisoners which constitute ongoing crimes against humanity.”

The reference to “impunity” was reminiscent of a number of previous statements from JVMI and other organizations, including one from Amnesty International which referred to the June election of Iranian President Ebrahim Raisi as a “grim reminder that impunity reigns supreme” in the country’s leadership.

In 1988, Raisi was the deputy prosecutor for Tehran, and following a fatwa from Supreme Leader Ruhollah Khomeini regarding organized opposition to the theocratic regime, he became a key perpetrator of the resulting massacre. Raisi was one of four officials who sat on the Tehran “death commission,” which oversaw the interrogation and execution of political detainees in Evin and Gohardasht Prisons.

His personal authority was later expanded to other localities upon Khomeini’s direct order, apparently as a result of his particular commitment to fully implementing the fatwa.

Tuesday’s letter quoted the 1988 document as targeting Iran’s leading opposition group, the People’s Mojahedin Organization of Iran PMOI/MEK), and decreeing that those who “remain steadfast in their support” are “waging war on God and are condemned to execution.”

The allegation of genocide appeared in the first paragraph of JVMI’s press statement regarding Thursday’s press conference, while also labeling the massacre more generally as a “crime against humanity.” This description seems indisputable on account of the fact that the death commissions in Tehran and various other cities are reputed to have ordered hangings or deaths by firing squad for more than 30,000 political prisoners over a period of about three months.

Baroness Verma noted in Thursday’s press conference that Western governments had been at least vaguely aware of the mass killings while they were still ongoing, having been warned in writing by MEK leader Massoud Rajavi, among others. She, therefore, concluded that those governments have a responsibility to challenge Iran’s impunity by using the United Nations as a forum to push for international inquiries into this and other Iranian crimes against humanity.

The press conference echoed the sentiment from Tuesday’s letter regarding the possibility of further expansion of Iran’s human rights abuses in absence of retroactive accountability.

“We are concerned that lack of accountability for the perpetrators by the international community could embolden the Iranian authorities to commit further atrocities against dissident protesters and political prisoners, as was witnessed during the deadly crackdown on the nationwide protests of 2019,” the letter said.

The protests in question broke out spontaneously across nearly 200 cities and towns in November of that year but were promptly crushed by authorities who opened fire on crowds using live ammunition. Approximately 1,500 peaceful demonstrators were killed in this fashion, and thousands of others were arrested. Many then faced torture over a period of several months, as detailed in an Amnesty International report titled “Trampling Humanity.”

Struan Stevenson’s remarks at the JVMI press conference emphasized Raisi’s leading role in that crackdown, which took place while he was head of Iran’s judiciary. Stevenson then went on to highlight some of the means by which individual countries and individual entities within those countries might exert pressure on Iranian human rights abusers while waiting for the United Nations to open the requested inquiry.

He noted that he had personally filed a request for Raisi to be arrested in the event that he set foot on Scottish soil. This apparently prevented the Iranian president from attending the COP26 climate change summit in Glasgow. Stevenson also noted that similar requests had been presented to legal authorities in other countries, before declaring that Raisi “had better be warned that if he sets foot perhaps anywhere in the West… he could face imminent arrest, and his impunity will end.”

The threat of arrest on foreign soil is credible in light of the principle of universal jurisdiction, which allows for virtually any country to prosecute serious violations of international law, even if those violations had no direct impact on the prosecuting country. In 2019, this principle was invoked to justify the arrest of Hamdi Noury, a former Iranian prison official, upon his visit to Sweden. Noury is currently standing trial for war crimes and mass murder on the basis of his own participation in the 1988 massacre. After more than three decades, he is the first official to do so.

The signers of Tuesday’s open letter are hopeful that he will not be the last. The letter seemingly endorsed the prospect of further prosecutions based on universal jurisdiction, in that it quoted an Amnesty International statement as urging that very solution.

However, the focus of the letter remained on the prospect of an UN-led investigation resulting in prosecutions at the International Criminal Court. In fact, that appeal was strengthened by the fact that the letter’s signatures include that of Judge Sang-Hyun Song, a former ICC president. He was joined by more than 100 other current and former UN officials, including former heads of both the Security Council and the Human Rights Commission.

Many of the same officials signed their names to a previous call to action in May 2021, just weeks before Raisi was appointed president. That development has seemingly brought a new sense of urgency to the campaign through its “grim reminder” or Iran’s impunity.

“This is a regime that is placing itself above international law,” said Tahar Boumedra at Thursday’s press conference, “and this is why we need to bring this regime to accountability; we need everybody who participated in this crime, including the president of the Islamic Republic, Ebrahim Raisi – they need to be held accountable.”