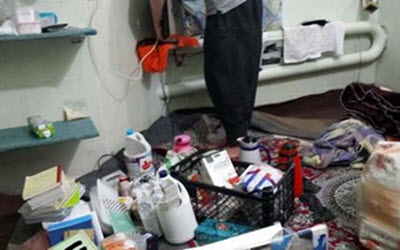 The incident occurred on Saturday morning in Hall 21 of the prison which is situated in the city of Karaj, north-west of Tehran. Around 100 suppressive guards in full riot gear and wielding batons raided the ward which houses political prisoners of Kurdish descent, according to reports from the prison.

During the raid, which lasted more than two hours, prisoners’ personal items were searched and many items destroyed. Pillows were torn apart with blades.

Some 40 Iranian Kurdish political prisoners are housed in the hall.