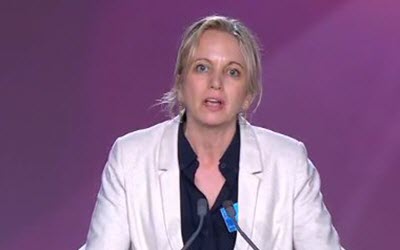 NCRI – A top legal organization in Britain has condemned the recent mass execution of political prisoners in Iran and addressed how the mullahs’ regime can be held to account.

Kirsty Brimelow QC, the Chairwoman of the Bar Human Rights Committee of England and Wales, expressed the difficulties of bringing the regime to justice over the 1988 massacre in which they murdered 30,000 people, primarily opposition activists affiliated to the main opposition group People’s Mojahedin Organization of Iran (PMOI or MEK).

In a video message, she states that there are two routes to hold the Iranian regime responsible for their crimes.

The first option is setting up an independent international tribunal to examine the evidence and recommend punishments and procedural changes. As these are only recommendations, it is unlikely the Iranian regime would follow through with them, she said.

The second option is the United Nations’ Security Council sending those high-ranking regime members responsible for the massacre to the International Criminal Court where they could be tried and sentenced.

When asked to comment on the most recent executions, Brimelow said they were unjustified and the way they treat the families of the victims is “barbaric.”

She said: “The executions that were carried out of the 28 people was appalling. The death penalty should not operate in civilized countries.  Iran, ironically, is a country that boasts of its culture and civilization and yet it has this very dark underbelly to it, where the state is carrying out mass killings.”

She cited from international human rights groups that over 2,500 people have been murdered by the regime since Hassan Rohani began his so-called “moderate” reign. She called for the international community, especially politicians, public figures and religious leaders to speak out and condemn the executions.