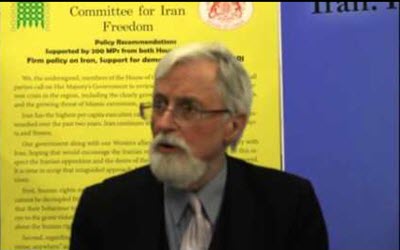 NCRI – A prominent British lawyer has expressed his passion for the Iranian Resistance and their fight for justice.

Malcolm Fowler, a member of the Human Rights Committee of the Law Society of England and Wales, sent a message of support to the Iranian people on the anniversary of the 1988 massacre of political prisoners in Iran. He spoke to address the brutalities of the Iranian regime when it came to human rights.

This comes in the wake of the mass execution last week in which at least 25 Sunni political prisoners were killed by the regime.
That execution happened on the anniversary of the 1988 massacre in which the Iranian regime killed 30,000 political prisoners within the space of a few weeks. The vast majority of those killed were affiliated to the main Iranian opposition group People’s Mojahedin Organization of Iran (PMOI or MEK).

Of the 1988 massacre, Fowler said: “It’s an appalling atrocity that has gone a long time unrecognized by the international community despite protests by Amnesty international in 2008 and a unanimous vote of protest by the Canadian parliament in 2011.”

He tells of how, in 2001, Mohammad Mohaddessin, the Chair of the Foreign Affairs Committee of the National Council of Resistance of Iran (NCRI), had presented the international community with files on the 21 high-ranking officials who were involved in the massacre the most. This case has never been taken forward from there, he said.

The Law Society of England and Wales have protested and intervened on behalf of people suffering in Iran, and especially the PMOI (MEK) members in Camp Liberty in Iraq. Fowler said that the Law Society would never stop intervening or protesting until the Iranian regime is no more.