Iran: 100 arrested for dancing at mixed party as oppression continues under Rouhani 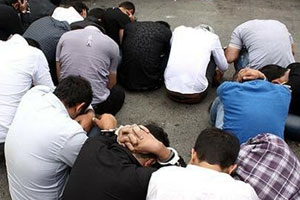 NCRI – The State Security Forces (police) in Iran have arrested 84 young people for dancing at a party in the city of Mashhad.

The 49 men and 35 women had been attending a mixed-gender party when they were raided by agents of the regime’s Ministry of Intelligence and Security acting on a tip-off.

A state-run media report said: “After the information was confirmed, the necessary coordination was carried out with judicial authorities and the authorization for the operation was issued.

“The 49 men and 35 women were arrested in a surprise operation while they were dancing.”

A separate report said another group of 20 young men and women were arrested by Revolutionary Guards on Thursday in the city of Amol, in northern Iran.

The arrests come despite promises by so-called moderate President Hassan Rouhani that he would expand social freedoms during his term in office.

Instead, oppression of the population has increased, along with a steep rise in executions to more than 1,200 in the past 18 months.

The raids also follow the arrest of sellers and distributors of satellite equipment, and closure of barbers and photography shops in a number of cities on the grounds they are ‘un-Islamic’.

The regime’s morality police have arrested 21 people in Tehran who have been allegedly involved in the production and sale of satellite dishes and other equipment helping Iranians watch satellite TV.

The head of Tehran’s morality police claimed his forces had destroyed the ‘network of very advanced workshops’ for the production of satellite equipment.

According to another report at least 30 shops, including photography shops, barbers shops and printing shops were sealed in several cities in Mazandaran Province, northern Iran, on the pretense that they breached Islamic codes.

In recent months, many photographers, publishers and artists have been arrested and deprived of their jobs for using social networks such as Instagram and publishing their work on social networks.