Iran: Call for indictment of all government officials 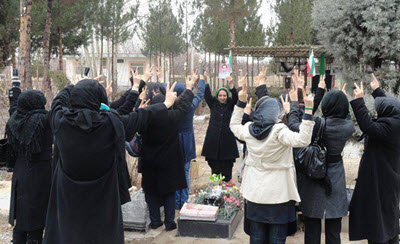 NCRI – A group of activist mothers and families of political prisoners and martyrs who lost their lives during 2009 uprising after the sham elections in Iran have announce in a letter that they would indict all government officials for their crimes.

These families and mothers who are known as “Mothers of Laleh Park” in an open letter called for justice for the 1988 massacre of political prisoners in Iran and indictment of all officials of the Iranian regime.

The following is excerpts of their letter:

Mass execution of political prisoners in the summer of 1988 in Iran is a political massacre in which the prisoners who had received prison sentences and were spending their prison terms or had finished their terms were executed by the “Death Commission” following a fatwa or decree [by the Iranian regime’s then Supreme Leader Khomeini] and after retrial in closed and unfair courts while their families were unaware of their executions. Nearly 5000 of these Mojahed and Combatant human beings were executed and buried secretly in mass graves in Khavaran, Behesht-e Zahra and some other unknown cemeteries in Tehran alone.

Based on the Statute of the International Tribunal at Nuremberg, the 1988 massacre of political prisoners in Iran can be regarded as “crimes against humanity” or “genocide” and officials of the Islamic Republic as the perpetrators and accomplices of this heinous crime can be brought to justice in international courts, because more than 30,000 political prisoners, who had previously received prison sentences, have been massacred in absolute secrecy and in systematic and planned group executions by the Iranian regime’s authorities after torture and rape and after secret and unfair retrials and with government decree.

The regime of Islamic Republic during the past twenty eight years has remained silent about this crime to avoid disclosure of its secrets.  But the mothers and families of the massacred political prisoners and other justice-seeking activists in Iran and abroad in all these years have tried in different ways to stand still and fight against this silence to hold the officials accountable and bring the government to respond. These activities include but not limited to a range of protests and sit-ins in front of Justice Department, writing petitions to the judicial authorities and other official bodies, going to the grave of their loved ones and interviews and writing and posting revealing contents, attending memorial ceremonies at home and in Khavaran cemetery and gathering together inside Iran as well as disclosure of this crime abroad via writing memoirs, books, articles, interviews, holding ceremonies and memorials and participating in various conferences and gatherings, etc., which did not allow the voice of Iranian people and their cry for justice be silenced.

Following disclosure of Mr. Montazeri’s audio file [and his speech during a meeting with the officials of “Death Commission” responsible for the 1988 massacre], the issue has become more clear than ever before. The important point in this file is the voice of the members of “Death Commission” admitting the massacre, and no one can deny it anymore. Then, the mass grave of [the massacred political prisoners] in Malek Abad in Mashhad was discovered and revealed. And now no one can deny this crime and the killings and the regime officials have started one by one to take a stance.

Mostafa Pour-Mohammadi, Justice Minister in Rouhani’s Cabinet, flagrantly says: “We are proud that we have implemented God’s Commandment in this regard.”

Hashemi Rafsanjani considers the audio file an insult to and desecration of Khomeini and condemns its disclosure. He says: “I express extreme regret regarding the recent wave of attacks created against Imam [Khomeini] that continues in almost all foreign hostile media. This is tarnishing and damaging Haj Ahmad [Khomeini’s son] position and respectable house of Imam in the society and they should not be allowed to reach their goals.”

Hassan Khomeini [Ayatollah Khomeini’s grandson] says: “The executions were necessary to maintain the Islamic Revolution.” Khomeini’s other grandsons as well as other mullahs including Mousavi Tabrizi, Mousavi Bojnourdi, and Mohammad Ali Ansari joined the critics of Mr. Montazeri and supported the 1988 massacre.

Ali Falahian, former Minister of Intelligence under Rafsanjani’s presidency, regarding the massacre says: “The view of Imam [Khomeini] and all religious scholars is that the sentence for those who rebel against the Islamic rule is execution and there is no doubt about it. Imam said that God’s Commandment must be implemented and the history’s judgment should be ignored.”

Ahmad Khatami: “What the late Imam has done in [the] 1988 [massacre] was according to Quran and religious jurisprudence and a revolutionary act. It was a great service to the Muslim nation of Iran.”

Taj-Zadeh talked about reconciliation and said: “Forgive but do not forget.”

When and where did the regime officials ask for forgiveness that he (Taj-Zadeh) says this and talks about national reconciliation? Can anybody talk about reconciliation with a ruling government that with utter obscenity considers the mass executions of political prisoners in 1988 legitimate and right and implements the policy of physical elimination, torture and imprisonment or heavy sentences for political and conscience activists in its extrajudicial courts and emphasizes on continuation of this policy? Taj-Zadeh with pragmatism says: “I apologize to the families of those executed in that catastrophe who were not members of the PMOI.”…

However, these days Khamenei, Rouhani, Khatami and other officials of the regime and majority of the so-called reformers have remained silent because they have directly or indirectly participated in this crime and have been an accomplice in it and they know that if they say anything, they will be exposed and disgraced more.

During the executions of political prisoners in 1988, Akbar Hashemi Rafsanjani, who was Deputy Commander-in-Chief of Armed Forces at the time, on 27 July 1988 said: “This is a good opportunity to destroy them (the PMOI) and get rid of them!”

In the early years of the revolution, Hassan Rouhani speaking in the regime’s parliament in July 1980 said: “We ask our army and the Revolutionary Court not to rush in the case of the conspirators and do a wide range of investigation to find their roots. I request that the conspirators be hanged in public during Friday Prayers in order to have a greater impact.”

We, Mothers of Laleh Park, who also grieve [our martyrs] in Khavaran grave site, call for indictment of all officials of the Iranian regime who have been complicit and had a role in the killings in the 1980s particularly the massacre of 30,000 political prisoners in the summer of 1988 in Iran. We demand removal, trial in courts and punishment of all those criminals who occupy the highest judicial and executive positions and authorities in Iran. Our homeland in the past 37 years has been invaded by those who have brought nothing but evil and enmity of freedom, justice and equality, and their Sharia and civil laws and achievements are also extremely discriminatory and against freedom. They have no respect for human lives and ideas, and the outcome of their existence and their present for us is repression and destruction of humanity. They are the ones who have destroyed thousands and thousands of freedom-loving souls and noble free and dynamic thoughts; but enough is enough and a solution must be found.

1) What was the exact method and process of decision making and implementation of the mass executions of political prisoners and who were the perpetrators of this brutal massacre?

2) On the basis of what law and for what crime, prisoners who were sentenced to prison terms, were retried in closed-door courts and executed?

3) Why was the trial of political prisoners held behind closed doors?

4) Why were the families of political prisoners kept in absolute darkness about the fate of their loved ones nearly five months after their executions from the time the meetings were banned to handing over the bags containing their belongings?

5) The exact number and names of the political prisoners who were massacred in the summer of 1988 must be announced;

6) Where and how did they bury those who were executed?

7) Where are the wills and testaments of those who were executed?

8) Why the families [of the executed political prisoners] do not have the right to hold memorial ceremonies freely?

9) Why Khavaran’s graveyard doors are closed and the security forces deny access to the families?

10) Why Khavaran and other unnamed graveyards have been turned upside down several times?

We thank Mr. Ahmad Montazeri, for making the audio file available to the public and provided it to people (although with twenty-eight years delay), to help uncover the truth. We call on the regime’s officials to stop the pressure and case making against him.

We also call on Mr. Ahmad Montazeri and other officials, who distanced themselves from the regime and claim that the Islamic Republic’s officials are criminals and regret their alignment and association with them, to help the families and justice-seekers to uncover the truth and provide them with information and expose the Islamic Republic’s secrecy and concealment of their crimes. Of course, we welcome these bold actions which are in the public interests.

The right to know the truth and seek justice is the most obvious right and demand of the families and Justice-Seekers and we follow it relentlessly.