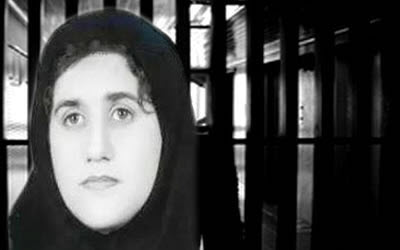 NCRI – A heart-breaking letter from an Iranian political prisoner exposes the medieval tortures in Khamenei’s prisons.

Afsaneh Bayazidi, a Kurdish political prisoner, and a student from Bukan, was sentenced to four years in prison and exile in Kerman prison by Mahabad’s revolutionary court.

Her crime? Creating propaganda against the system and insulting the Supreme Leader.

Bayazidi’s letter states that because she comes from the deprived Kurdistan region, she is used to injustice and oppression from the regime but she will not stay silent.

She wrote: “During the 90 days that I was in detention, they have tortured me with every possible method and every means. In the first few days of detention, the torture was so much that I could not even walk. My feet and my back were bruised and turned black. I was beaten so much that my mouth and my nose were bleeding. They did not have an iota of mercy on me.”

Bayazidi said that when she pleaded for mercy or called out to God, she was told that there was no god in the Intelligence Agency.

She continued: “At least twice they hung me by feet and by hands for several hours. In all the time that I was detained and interrogated, I was either tortured or blindfold and my eyes are now damaged and I feel that I have low eyesight and dimness. For 4 years I have been having breath shortness, and they did not give me my (oxygen) capsule to torment me more and extract confessions.”

She said that not even animals are treated in the way that the Regime treat her.

She wrote: “I was forced to make false confessions so that they could make cases against me and succeed in their inhumane tactics. I don’t have anything to lose. I was tortured and threatened with rape and imprisonment in exile and they did the worst tortures on me. I have no fear now and I am not afraid anymore so it is my right to explain the truth.”

She is currently denied phone calls and meetings; she snuck this letter out via a friend in order to expose the Regime.

Previous articleIran: Call for indictment of all government officials
Next articleIran: Optometry of a Baha’i citizen in Isfahan sealed