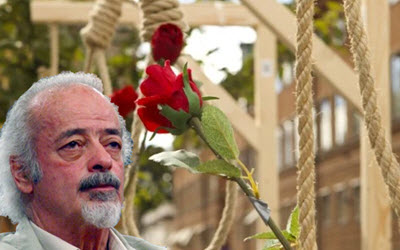 NCRI – Dr. Mohammad Maleki, the first Tehran University chancellor after the 1979 revolution, calls for international trial of Iranian regime. Mr Maleki emphasized on the demands for justice for the 1988 massacre of over 30,000 political prisoners in Iran. The following is excerpts of his speech:

“We are in special days; the days that for many years we were waiting for. And the poem that I wrote in my latest letter: Did you see that the unjustly spilled blood of butterfly did not give the candle the respite to live thru the night until dawn.

“Those of us who experienced prisons in the 1980s know this hugely insane person, Mostafa Pour-Mohammadi, very well. In 2009 he denied everything and said it (the massacre) never happened at all. And now he says ‘We did well, we did our religious duty (Sharia), we will do it again and we are proud of it.’

“I, however, as a Muslim child, a child who grew up in mosques inside the country and in churches abroad, I do not understand this Sharia law. What is this Sharia that they say they have done their religious duty (according to Sharia)?

“If Sharia means killings, executions, lies, theft, looting and fancy salaries… then damn this Sharia from which such things come out.

“But if Sharia means justice, freedom, equality, and equal rights, then we accept it and seek justice according to this Sharia…

“Today the facts are clear and surely many other facts will become clear later. I particularly wrote in the letter that we demand to know the facts about the 8-year war (between Iran and Iraq) that destroyed hundreds of thousands of Iranian youth and students and according to Hashemi Rafsanjani (Iranian regime’s former president) 36 thousand children who were sent to war (by the regime) were torn apart. We want the truth becomes clear.

“We do not intend to execute anyone or cause violence, because we are a member of the LEGAM, The abolition of the death penalty step by step. We will not execute any one of them. We want them to tell what their crimes were, and then let them go to people if they dare.

“We recommend to people not to touch them, though. Only spit on the ground when they see them (these criminals).

“The Justice-Seeking movement must be expanded, as the issue is fortunately being debated by the international bodies now, so that in the future no group, no class, no party, and no organization dare to do such acts. “

Previous article
Iran: Retired staff of Education Ministry stage rallies in Tehran, other cities
Next article
Berlin’s Solidarity with the International Movement to Obtain Justice for the Victims of the 1988 Massacre in Iran.