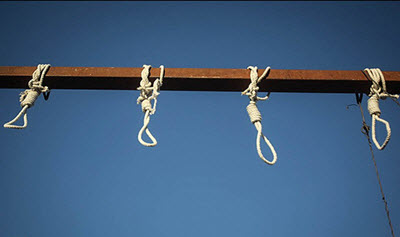 NCRI – Iran’s fundamentalist regime hanged on Wednesday a group of six prisoners in a jail in north-western Iran and a seventh prisoner in the north-east of the country.

The six men were hanged at 2am on July 27 in the central prison in the city of Orumieh (Urmia), the provincial capital of Iran’s Western Azerbaijan Province.

They had been transferred to solitary confinement on Tuesday in preparation for their execution.

They were accused of drugs-related charges.

A seventh man, identified as Reza Sabzevari, 32, from the town of Nishabur (Nishapur), was executed in the nearby city of Mashhad in north-eastern Iran. He had two children aged two and 10 and had been locked up in Mashhad Prison for some 18 months.

The mullahs’ regime hanged a man in public in the town of Songhor, western Iran, on Monday. On Saturday the regime hanged three prisoners in a jail in the Central Prison of Rasht, northern Iran.